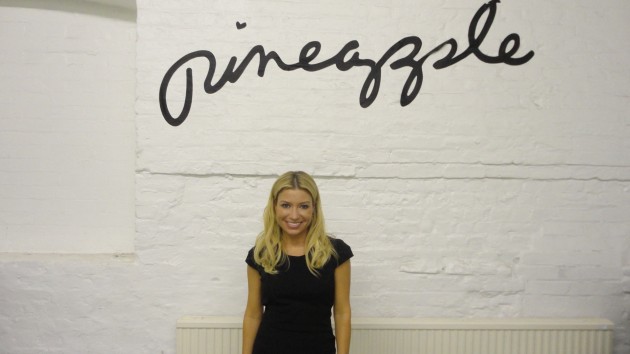 TWR was invited to talk to the tiny but energetic Tracy Anderson last week, as she has just released another DVD (Total Cardio Workout) and was in town to flog it to the press.

Now Jane and I take our exercise seriously, in the form of yoga (to which we are addicted), brisk walks (with or without a dog) and visiting shops (it’s a professional interest remember..yes, it is). We don’t really do the gym. A quick look at Tracy’s website left us breathless and after viewing her new DVD we needed of a cup of tea and a recuperative digestive biscuit (chocolate).

Tracey is 35 and rather sweetly said that made her’ fit right in’ with our over 35 readership. Bless her, it doesn’t. She is made of different stuff, being one of those ‘wonder women’ types that only exist in America: driven, blonde, thin, perfect white teeth, successful and exhaustingly upbeat. It must be something in the water over there.

Sitting in the Pineapple studios in Covent Garden (no, I didn’t see Louie, despite trying VERY hard to find him) she seem’s too small and nice to be a fitness queen, but with studios in New York and Los Angeles, Madonna as an ex client and Gwynnie as a pal, she’s right up there.

When we asked Tracy what advice she could offer to readers who might be struggling a bit trying to motivate themselves into any sort of fitness regime, having ‘been there and failed’ rather too many times already, she said “Forget about the age thing, it doesn’t matter what your age is, you can make a significant change to your body if you want to. But you need to be focussed, you need to do the regime for one hour a day, six days a week, it’s tough but when you get into the routine, it works”.

Hmmm, well we admire her for not pretending its a pushover getting fit, but I think we’re some way off ready for that level of committment.However, you might not be, you are probably better women than we are and ready to take on the challenge. And like the gym.

So for those that are, we have two of Tracy’s videos to give away, which actually you don’t need to go to the gym to do, you can huff and puff in your front rooms. Leave us a comment below saying why you deserve it. As always, the most entertaining comment wins.