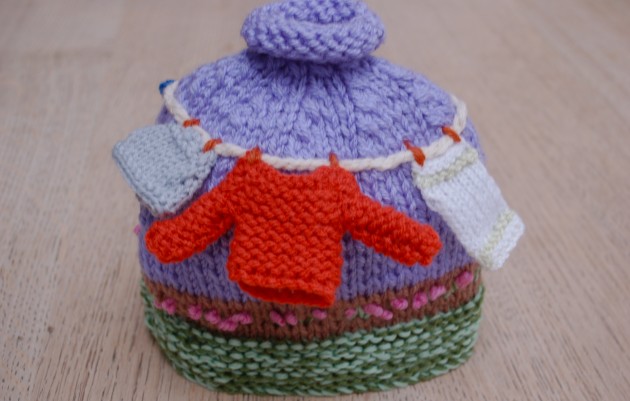 I’ve just read Jane’s post on Tea Shops and have to show you my newest hand knitted tea cosy. I bought this while at the recent visual merchandising show in London, where I met concept designer Jacquie Marsh’s team, Gorgeous, who do many of the windows for White Stuff.

White Stuff Foundation, set up in 2010 does a lot of fund raising for the 67 charities it supports and for a recent set of windows, Jacquie bought over 700 hand knitted or hand crafted tea cosies on eBay (‘pretty much each one was an individual purchase too’! she told me) and a similar amount of novelty tea pots, which went into all 74 of White Stuff’s windows around the country.

The idea was to sell all tea cosies and tea pots from the window, when you bought one your pot/cosy got your name on it and you picked it up when the window came out. The money raised went to charity, and Jacquie told me the York store was sponsoring a para-olympian and I know my money (£5 for the tea cosy, which I thought was a bargain…don’t you love the knickers?) went towards this.

Jacquie was selling off the ramainder of her tea cosies and tea pots at the show, there were all fabulous and it was difficult to select just one, but I am very pleased with my ‘washing line’ one. We tried to figure out a way of offering them to TWR readers, but it got too complicated as both she and I were off on hols, but maybe next time White Stuff do something similar we’ll link up, as I reckon there are a lot of TWR readers who would love a novelty tea cosy like this one, particularly if they were raising money for a good cause.

Oh, and Happy Easter all!

Both Jane and I and anyone else who has ever come across her, loves Wendy Dagworthy. Head of the RCA MA fashion course from 1998…