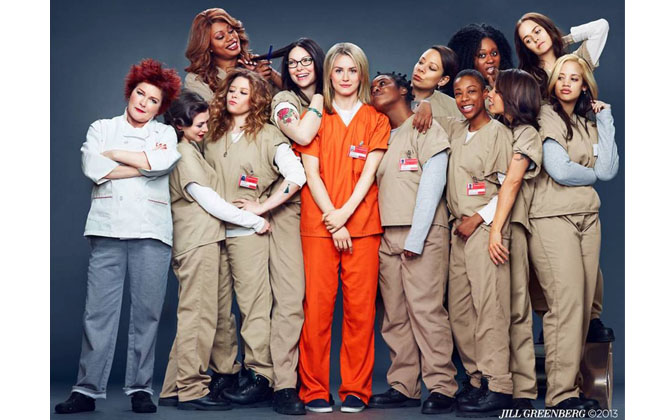 Just when you think you have binge watched every great TV series there is, along comes another one and before you know it, you are losing whole evenings in the persuit of “just another one before bed.”

I found out about Orange is the New Black from my teenagers – as did many of my friends – as they are early adopters (make that illegal downloaders!) of cult and trash tv and new underground films. But the great thing about this series is, that you don’t have to search through loads of dodgy links to view it, as it’s available completely legally on Netflix.

OITNB made a low key appearance on Netflix late last summer and slowly but surely, word (and social media) spread and turned it into cult viewing for those in the know. Made solely for Netflix (like the brilliant House of Cards) it’s based on the best selling memoir by middle class, engaged, blonde, artisan soap maker Piper Chapman, who ends up serving a 15 month prison sentence, after carrying a suitcase of money to Paris for her former lesbian lover. So far so fascinating – and true. The twist in the tale comes when said former lover Alex, turns up in the same prison.

OISTNB has everything one could want in a viewing fest – dark humour, emotion, engaging characters and lots of lesbian sex, which may not sound appealing to some of you, but trust me after episode four, you will be considering it as an option. Alex Vause is hot!

As all 13 episodes are available to watch in go, it makes for the perfect lost (bank holiday) weekend and if you haven’t already seen it, you need to start now, as season two is out on June the 6th.

You have been warned!

See this: Orange is the New BlackTV

There is no doubt that older people are becoming increasingly more visible in the media, which can only be a good thing. But recently I’ve…