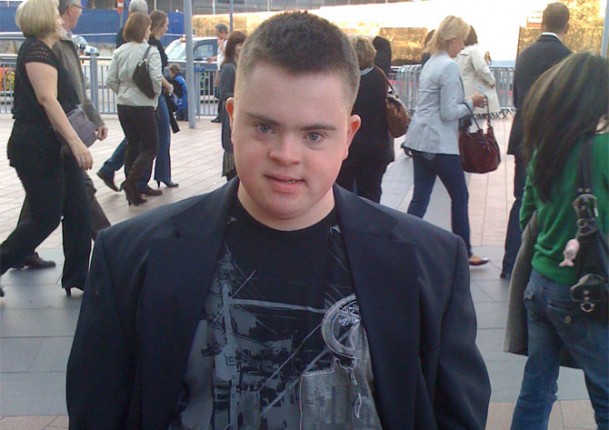 Today’s post is entirely about celebrating my nephew Max. He was born 18 years ago to my sister Sandy and her husband Paul; their first child. He turned out to have Down’s Syndrome, which frightened the life out of all of us, as no one was expecting it. His first few years were chaotic and somewhat nightmarish for Sandy and Paul as they came to understand what having a child that didn’t quite fit what everyone else held as ‘normal’ was like. Mostly it was -still is- very hard work for them.

Max however, would say his life was terrific, being a constantly up beat, busy, engaging and joyous teenager. He has had a string of girlfriends, featured in a number of TV programmes and a block buster film (Notes On A Scandal), is a huge fan of the London theatre (exclusively musicals) and a stalwart performer at Chicken Shed, the all inclusive North London theatre group. He is a natural entertainer and is always the focus of any room he is in. In short, he’s an astonishing, talented lad.

Anyone who has a child with any sort of disability will know how tough the landscape can be for both the child and its family. we daren’t even THINK about what happens when the council who fund Max’s education, social and pastoral needs start to slice into his allowances over the coming year, as we know they will, despite what Converse-Cam says.

When you dream of having a family, you picture perfect children, right up to the moment you are told there’s a problem, and our pre-pregnancy planning rarely accommodates problems like Down’s or Cystic Fibrosis or other issues. When this all goes pear-shaped, as it did for Sandy and Paul, it turns out that mostly, it’s you and him against the rest of the world, give or take a few friends and family members. My sister, her husband and their second son Charlie make me very proud that I’m part of their family, they are extraordinary individuals who have fought every step of the way to make Max’s life a fantastic one. They are inspiring in a way that should humble most of us and I sometimes wonder if some divine intervention resulted in Max getting them as parents (and brother) BECAUSE they are so incredible at it, crack-pot as that sounds.

Whatever, he’s reached 18 and today will be a manic, loud, crazy celebration of his life so far, with everyone who loves him coming to his lunchtime party. He LOVES parties and has been directing the planning of this one for about the last twelve months, I suspect Sandy and Paul will be quietly pleased when everyone has eaten all the food and gone home.

Max will be full of it today, just like any other 18 year old on his birthday and will be looking forward to more shows to go and see (if you ever need an analysis of any West End musical, he’s your critic), more Friday night youth clubs to host and more boy bands to learn the dance routines and music of. He’s a great example of living life to the full. Happy Birthday Max!

I am not a fan of cleaning (who is) and am particularly disdainful of anything bearing the label anti bacterial. So my excuse for having grubby work surfaces and sticky cupboards, has always been that bacteria is good for you,…