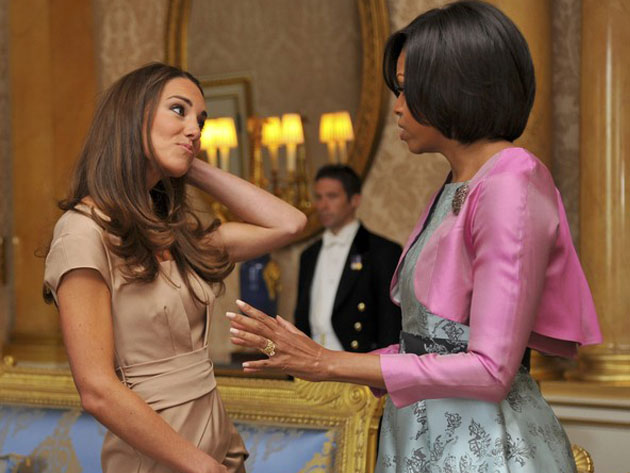 So the Obamas have left town after four days of grand dinners, politics and ping pong. And weren’t they fabulous. Intelligent, ambitious, inclusive and inspirational in a way David and Samcam can only dream of.

I say they, as listening to Michelles speech at Oxford brought a tear to my eye and highlighted how intelligent she clearly is.

I often encounter the the girls from Elizabeth Garrett Anderson School on the bus in the morning and as I Tweeted on Wednesday ‘ I wish I was on the school bus to Oxford, but I hope they behave better than they do on the no 73!’. Not that they are that bad, they are normal – make that loud – teenage girls, from an inner city comprehensive, not disimilar to my own kids schools.

Her inspirational words of encouragement can’t have failed to reach the girls chosen because ‘they are interested in Science but not reaching their full potential’. Who better to talk to them than someone who thinks  “success is not about the background you are from, it is about the confidence that you have and the effort you are willing to invest.”  Apparently since since visiting EGA in 2009, she has kept in touch with the school, writing letters and encouraging the girls in their studies. What an amazing role model for young girls (particularly black girls) in a celebrity obsessed world where lots of teenagers would list Kim Kardashian and Beyonce as their heroines.

So it’s agreed, we all love the Obamas and see Michelle as an intelligent, inspiring and very cool, first lady. So can someone please explain to me the medias obsession with what she was wearing?

Don’t get me wrong, I have already fessed up to my side column of shame addiction, and I love celebrity gossip as much as anyone, but I simply can’t understand why, from the minute the Obamas arrived in London, some of the media relentlessly listed the labels she was wearing, with not a word about what she was saying or doing! WTH, haven’t we established we like her because she is clever. We don’t want to look like her or BE her, in a Single White Female type way!

The obsession reached ridiculous proportions when the Obamas met the Cambridges and and the media reported the dress Kate was wearing was from Reiss, causing an online shopping meltdown. The company Tweeted later in the day ”Due to unprecedented demand, Shola mania has crashed our website! We are endeavouring to bring the Reiss brand back to you ASAP!”

Who are these women who want to dress like Kate Middleton and why does a meeting between a member of the Royal family and Americas first lady, have to turn into a battle of the frocks, with Liz Jones proclaiming ‘The tanned Duchess of Cambridge blew Michelle Obama out of the water.’ Does anyone actually care and why do the media feel the need to resort to point scoring over an outfit? I didn’t notice anyone commenting on how David got his suit from Austin Reed, but Barack looked slimmer and more stylish in Ralph Lauren. Oh no, they were busy doing ‘important mens work’!!

Call me old fashioned, but what happened to simply admiring someone, why do we also have to look like them? When I think of the women I am inspired by, it’s for what they represent, what they think and the work they do, not what label they wear. Well ok, sometimes I like the way they dress too, but I wouldnever go and buy a dress just because they’ve worn it!

Anyway must dash, I have to get to Lipsy and get the dress Amy from TOWIE was wearing in Marbella last week! Remember ladies ‘No carbs before Marbs.’