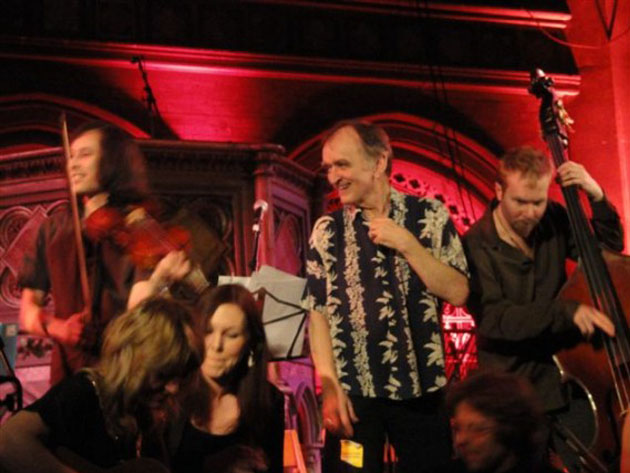 it is Sunday night in a rather uninteresting pub in a non-fashionable part of West London and I am skulking in a corner hoping that no one I know comes through the door. Middleagedad and I clutch our beers and keep our heads down until a small door at the back of the pub opens and a short, dumpy grey haired woman wearing a floral dirndl skirt pokes her head round the door and beckons us in.

In the back room, a fabric banner possibly made in 1978 hangs behind a tiny makeshift stage, and declares that we are in a folk club. We are actually in the cleared out restaurant bit of the pub with the aroma of industrially cooked Sunday lunches hanging in the air,  but no matter, we are not creating a fuss because someone might talk to us and we don’t want that. We are the youngest here, by a long stretch and pretty much everyone else is wearing sandals with socks and would use the word ‘slacks’ to describe their trousers. Time warp doesn’t begin to cover it.

MAD and I have recently developed a love of folk music and at this folk club we have seen some terrific stuff; the award winning Chris Wood (Hollowpoint is a beautiful song), Karine Polwart, Jack Harris,Lau and our favourite Anais Mitchell, All fantastic musicians. But sartorially, both artists and audience could do better and we are a long way from rock & roll glamour.

I am frequently appalled at what audience members have turned up in, double denim is often seen without an ounce of irony or fashion know how, as is double leather, on bodies that have had one too many of the aforementioned Sunday lunches.

And the artists aren’t much better, Anais Mitchell, who is adorable, showed me the boots she was performing in on Sunday, which are so old and worn through on the top that they are turning into strappy sandals. She is looking, she admitted, for a new pair. We saw Martin Carthy, who is a legend in the folk world, recently at Anais Mitchell’s Hadestown concert at the Union Chapel in London and he was wearing a Hawaiian shirt that looked like it had shrunk in the wash.

I am anxious not to be too closely associated with this style-free zone, but obviously feel very shallow for the admission as it’s the music that counts. But I can’t help it, I want to take everyone aside and give them a sharp talking to. Perhaps I’ve been watching too many Top Of The Pops repeats from 1976 on Thursday nights, but I want to yell at them ‘where’s your sense of style?’

Most musical genres have a strong ‘look’ that unites it and is worn with pride as a badge of honour amongst fans, Punk, prog rock, rap and glam rock all have instantly identifiable styles, even 70s pop -although often appalling- was a statement of intent in very tight trousers. But folk seems to be just drifting in a sea of bad taste.

Country and folk music in America has a stronger image, what with the stetsons, snake skin boots and checked lumber shirts, UK country and folk is missing something sartorially. I completely love the music and the people I have met have been incredibly nice, but if I’m to get serious about it, then things really do need to improve, I want to feel proud of liking folk music and I need a look I can fall in love with. There’s a fantastic sense of history and storytelling anchored in folk, with masses of heritage to look back on for a sense of visual creativity. I don’t want to get all Trinny and Susannah about things, but I need improved wardrobe action, and soon, particularly in a certain corner of West London. You know who you are.