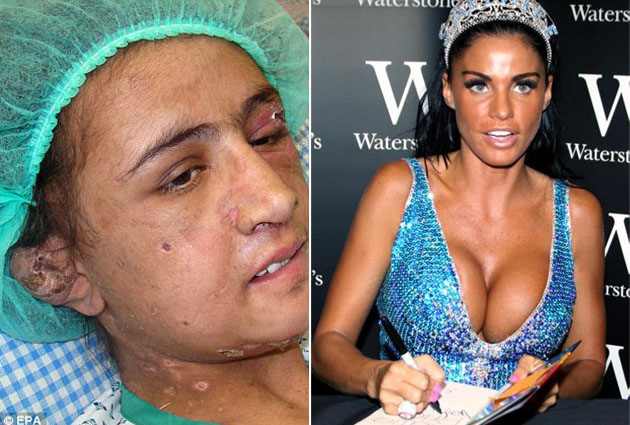 Yesterday over breakfast, while reading the paper, I said to teen daughter ‘you should be glad you’re not a 15 year old girl in Afganistan’, ‘why’ she replied, and I told her the hideous story of the young girl, tortured and made to work as a prostitute by her husbands family. ‘How awful, why?’ she said, and as I started to explain how women in some countries have no rights, she interrupted,  ‘Should I wear my jacket belted or undone?’ I didn’t know whether to laugh or cry, as in one way I was glad that was all she had to worry about, but wondered if I had somehow missed a bit in her feminist education. But it was the first day back at school and we all know the way you look on the first day really matters, and to be fair she is slowly but surely, becoming a feminist, even if she does want to be one of the Kardashians, which if I’m really honest, after watching their show last night, so do I – they are SO glamorous.

Perhaps this is the problem, glamorous, sexy, high maintenance celebrities, who don’t do any real work, have become the role models for a generation of young girls, for whom getting a boob job can be more of a career option then obtaining three A levels. Why even getting pregnant can turn you into a celebrity, as anyone who has ever watched possibly the most depressing reality show – ever – Teen Mom, will know!

As more and more girls take their obsession with being “perfect” a stage further and dabble in cosmetic surgery, surely there will be an impact on their health in the future. Anyone with an ounce of intelligence must realise that adding chemical gel to your gels on a regular basis, will eventually make them brittle, dying your skin may make it stained and patchy, adding hair extensions could make you bald, and inserting silicone, fillers etc, to any part of your body, is not natural and could have long term implications.

Cosmetic surgery used to be used to help people with congenital and developmental deformities achieve a better quality of life. Used in extreme cases, it was taken seriously, as anything that required a general anesthetic was a big deal. Now with celebrities such as as Katie Price regularly “popping” across to LA to have her lips or breasts done, these procedures are seen as an extensions of a regular beauty routine, or on the same level as a visit to a spa!

After our breakfast conversation, I flicked on the TV while drinking my tea, to watch a young girl who had the potentially faulty French breast implants, explain why she thought she should have them removed on the NHS. It seems between 40-50 000 women in the UK may have been affected by the faulty implants, which is a huge number and speaks volumes, about the way British women are embracing a dangerous and worrying trend.

Isn’t this just the beginning of a bigger problem, that ultimately we will all have to pay for, as the women who strive to achieve physical “perfection” end up looking not only worse than their more natural sisters, but physically and psychologically damaged too. This is an epidemic of enormous proportions and in years to come, our daughters generation will look back in horror, as they explain to their daughters why they too, should be feminists.

We are back from our holidays tomorrow, but if you are visiting Pure London’s fashion event today, do look us up at 2.15 when…