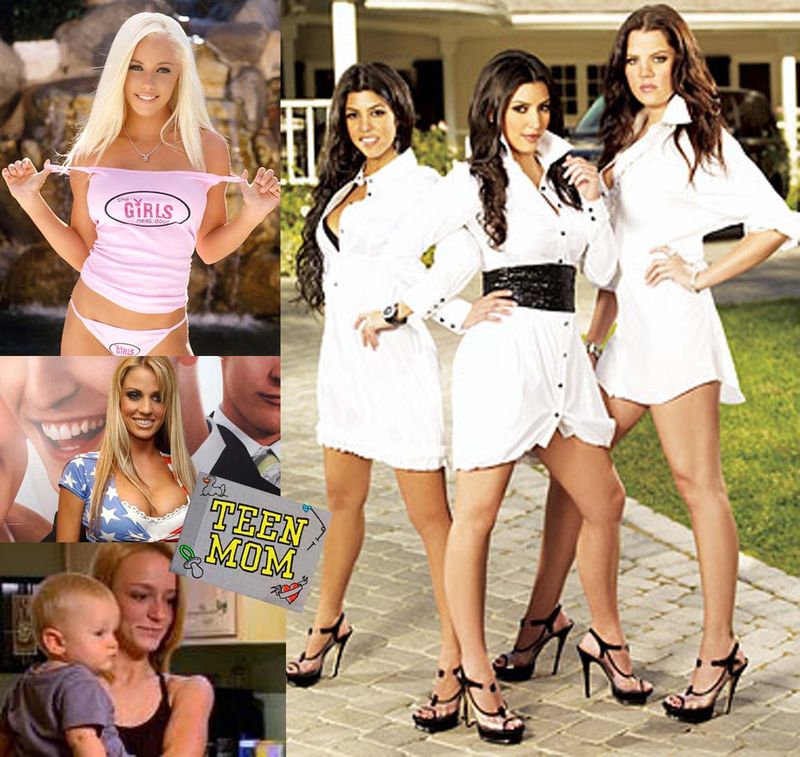 We start watching Keeping up with the Kardashians, a name I am familiar with, as I do from time to time peruse the odd gossip magazine (purely in the interests of research, obviously!). I have often wondered who these raven haired harridans are, and it seems they are a cross between the Hilton’s (that’s Paris and Nicky) and our very own Katie Price.

Kris the matriarch ‘momager’ is the driving force behind this Hollywood dynasty and manages the girls ‘careers’. What they actually do apart from attend parties and go shopping is questionable, but it seems Kim starred in a few B movies and an episode of CSI, and Dad Bruce is the face of the Wheaties box (it doesn’t get much bigger than that people!). Along with their hordes of other sisters (it’s difficult to tell which is which) they share their lives and dramas with us, minute by dull minute, day by depressingly shallow day.

OMG I am loosing the will to live!!!

We move onto Teen Mom, which documents the ongoing stories of teen pregnancies and the inevitable stresses this puts on the girls, their families and their relationships. I feel hopeful that this may provide some kind of encouragement to viewers to avoid pregnancy and do something with their lives. But despite the often depressing stories, I fear the girls featured, see themselves as reality stars, rather than tragic and old before their time!

We flick channels and catch 10 minutes of Kendra, featuring one Hugh Hefner’s ex Playboy bunnies. She previously starred in The Girls of the Playboy Mansion, which has to be seen to be believed. Kendra is now about to marry American football star, Hank Basket (made up name, if ever I heard one) and we are allowed a fascinating (excuse me while I throw up) insight into their world.

I finally can take no more and demand to watch something, ‘that doesn’t involve girls who are famous for shopping, sleeping with old men, being plastic or stupid.’ Of course, teen rolls her eyes and thinks I’m on another of my ‘feminist rants’! Which of course I am, but where are the positive role models for our teenage daughters? Where are the feisty characters with passion and determination that my teenage son watches on MTV. Life of Ryan, Rob and Big, Pimp my Ride,Orange County Choppers, may not be the most high brow TV, but at least the lead characters have some passion and meaning in their lives and actually do something.

What they need is a day on the sofa with a ranting feminist middleagedmum. I could easily ensure they never want to have sex or go shopping ever again!!

I confess I am slightly biased (ok a lot) about this book as Louise Glazebrook is a friend of mine, but if you have…