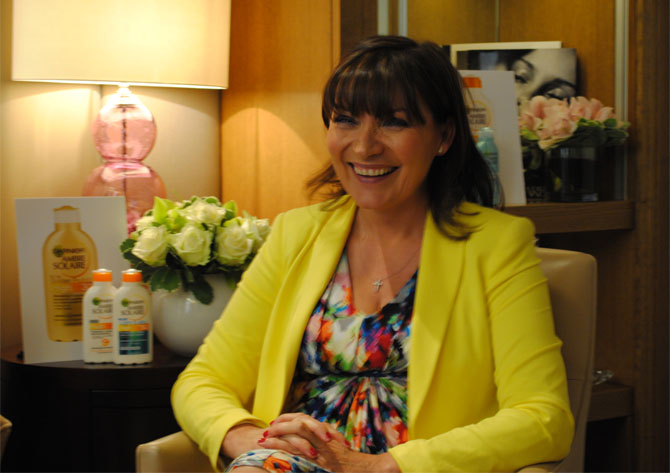 Hilariously for anyone reading this in the UK, I’m about to tell you how important it is to keep well protected in the sun with a good suncream. I know, laugh along with me as the rain beats down.

We were asked to do this as a sponsored post for Garnier Ambre Solaire which is working with Lorraine Kelly to encourage us to Measure our MLs and apply enough sun protection, we do very few of these as you know but this is important. According to Cancer Research figs, skin cancer is on the increase, over the last 30 years skin cancer in Britain has increased more rapidly than any of the top ten cancers and female rates have more than tripled.

Putting sun cream on is a ritual that those under 40 take much more seriously than those over 40. When I was growing up we considered it a successful day at the beach if our red-glowing skin stung until our eyes watered in the bath that evening. And that was under the watchful eyes of loving parents, who thought it was healthy to ‘catch some sun’.

During teenage years my girlfriends and I would mix together a killer cocktail of olive oil and lemon juice which we would baste ourselves in when relentlessly exposing our pinky-white bodies to the baking sun on our holidays on the Costa Brava, all the while reassuring ourselves that we needed to blister and peel within the first few days in order to progress to a proper, more long lasting tan (the pain! the peeling skin!)

Ambre Solaire was the hip suntan lotion du jour (remember the fabulous ad with Elle MacPherson in that gorgeous yellow swimsuit?) with its deliciously expensive smell and oily promise. When we could afford it we bought it because it assured us it would give us a fabulous deep brown tan with a stupidly low SPF factor (if it even had one, that simply wasn’t the point), anyway no one spent money on sun tan cream to STOP the suns rays, we all bought it to make us catch more! Such was the mindset of the 70s and 80s, it’s a wonder we survived. Ambre Solaire's vintage ad, promising we'd all look like Elle by the end of our two weeks in Spain

Thank goodness we know more now. I became a parent just as the skin cancer klaxon went off big time and thankfully my kids were all lathered up whenever they went in the sun, but not as much as they probably should have been, there were occasions when they still burnt, boys get very wriggly and cross if you put any obstacles between them and the beach and If I’m honest I also loved them looking brown, it’s just how I was brought up.

But we really need to change the ritual of how we think and act on protecting our skin if we’re to avoid not only the horrors of skin cancer, but also (appealing to our vainer selves) how much it AGES us…did you all see the case of the 69 year old US truck driver who had many more wrinkles on the side of his face that was next to the truck’s window and exposed to the sun’s UV rays? Scary eh? No wonder Joan Collins famously never goes out in the sun without suncream and a very big hat. 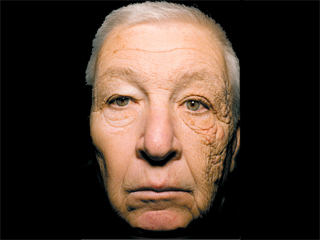 We still aren’t putting enough on, or topping it up as often as we should apparently. When we got together with Lorraine Kelly and Garnier earlier this week we learnt new guidelines. Garnier has been working with Team GB olympic track and field athletes who train outside every day to teach them how to stay well protected, not always as easy as it sounds, as you’ll see from the video.

Basically if you’re out in the sun, we need to use about 6 teaspoons of SPF cream per application to cover our whole bodies. NEVER use anything under factor 30 ever, it’s just not worth it. Most experience beauty editors I know use factor 50 on their faces throughout the summer months. Kids are recommended factor 50. And we should re apply the lotion every two hours.

Be vigilant when applying and cover all exposed areas, in the below video you’ll see that even when you think you’ve got everything covered, you probably haven’t (I think Lorraine made this video during the one week in April when the sun did actually shine). My favourite Ambre Solaire product is the new Golden Protect lotion which has a shimmer to it, which means you can see where you have applied it and that gold sheen adds a glamourous edge to sun cream. We also all loved the smell of the Soothing Hydrating lotion, just like sticking your nose in the cocoa powder tin. Personally I think there’s room for a retro smelling Ambre Solaire range to take us 40plus women back to the smell of the beach in our teens, only this time with more SPFs.

BTW, how NICE is Lorraine? she is so fabulously normal in real life, we want her as our friend.

BTW2 Garnier told us no product in the range has been tested on animals, more on its break through Epi-skin, lab manufactured skin for testing product in a later post!

Yes, we went to Fashion’s Night Out, I might blog later on my views, but to be honest, they are a bit ‘grumpy old…