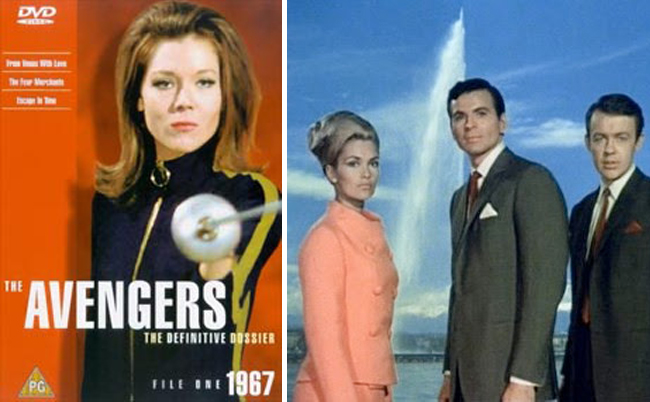 These days it’s rare I’m given an opportunity to emulate one of the super-sleuthing, all-action heroines we used to run around pretending to be in the playground – I’m thinking Diana Rigg as Emma Peel or Alexandra Bastedo as Sharron Macready here. So when I came across an introductory offer for 4 weeks of fencing lessons, I thought ‘here’s my chance to act out a childhood fantasy, keep fit and learn a new skill’. Actually what I really thought was ‘ooh, fab outfits’ quickly followed by ‘might meet a man’ but neither of those sentiments were worthy of Ms Peel. So I signed up, convincing myself it was all about the skills.

The fencing studio was in the basement under a modern block of flats – no chance of showing off my newly-honed skills silhouetted in front of anything resembling Lake Geneva’s famous Jet d’Eau then. The class of 12 consisted of mainly women, or couples, so no chance of meeting Mr Right either.

Anyway, forget the styling opportunities or dating potential, this was supposed to be about acquiring new skills. After an initial warm-up consisting of running up and down the rubber mat pistes, followed by a few lunge-based stretches, we were introduced to the basic fencing techniques of attack and defence. Once we’d grasped the moves – at this point I could hardly contain my excitement – we were ready to suit up. Here, at last, was my Ms Peel moment. We sartorially prepared ourselves for combat, each donning a fighting-arm half jacket, followed by a back-zipped padded top jacket. The women were issued with moulded plastic bust protectors to slip into internal pockets – not so much Gaultier for Madonna, more like Tupperware for Lakeland. Then came the single white glove – a Billy Jean moment for some of us – the top gauntlet and, finally, the gauze-faced helmet!

Decked out in full fighting armour I looked around at the assembled group. Instead of cutting the streamlined dash I had imagined, in our ill-fitting outfits we resembled the rabble crew of One Flew Over the Cuckoos Nest, but in primary school blue. At that point I realised I had no hope of becoming an Avenger or a Champion.

No self-respecting warrior would be complete without a weapon, so we were handed ours and were finally on guard, ready to fence. This was now the real thing, so instead of lunging at each other with a clenched fist, as we did in the practice session, we were now poking each other with a bendy rubber-tipped sword. Some more enthusiastically than others, it must be said. Our styles varied wildly, there were the Thrashers – swiping side to side like windscreen wipers in a hail storm; the Stabbers – having a Norman Bates bathroom moment, and of course the Circlers – doing that universal thing we all do on bonfire night when handed a lit sparkler.

And so we lunged and parried for the next hour, thrashing, stabbing and circling in our blue ninja warrior outfits. Two days later it was clear by the number of small purple bruises dotted over my torso (points awarded to my opponent) and arms (no points given to anyone) that I had inflicted very little point-scoring damage on my opponents.

I completed the four-week course, but really my heart wasn’t in it after the first lesson. That might have been down to my age – I was a good 15 years older than the rest of the class – so sometimes just keeping going was an effort. But I suspect the real reason was because playground fantasies retain their magic only if they’re left at the school gates.

MiddleagedSingle.com: Not quite a champion

Do you remember last year when we talked about Cherry tree rental ? Well Amanda and her sister rented a tree this year, for £40 between us and above is a picture of some of the 20 kilo plus haul…