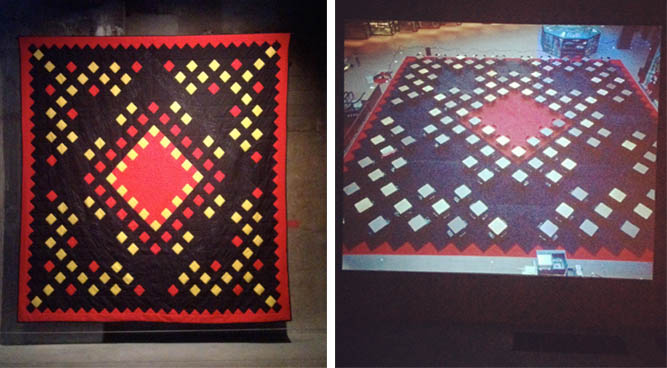 The fabric quilt, left and the performance video based on the design, right

Wonderful things have been happening at Tate Modern which we have been a bit slow in reporting on. The Tanks have opened, a space dedicated to performance art, but ONLY until the end of October, as the whole space is about to close in order to be rebuilt into a multi million pound Tate extension that wont open for nearly two years. The Tanks have to close for safety reasons, although rumour has it attempts are being made to keep them open.

Performance art can make us Brits freeze up, it’s tricky and often interactive, with audience participation, eek! All too edgy for some who like their art firmly stuck to the wall or floor and not wandering about amongst you and even asking you questions. But middleagedad and I went to experience it this week and it was uplifting and inspiring. As soon as you enter the cavernous Tate entrance you plunge in amongst a group of performance artists who run around a lot. Some will stop and have a chat to you. All very unsettling, but dynamic and wondrous too, as all good art should be.

But if that’s too much for you, just go see Suzanne Lacy’s The Crystal Quilt, a video of a work of performance art done in Minneapolis in 1987 (the Tate have only just acquired it) which shows how older women were brought into a creative project to perform. In the work, 430 women of 60plus gathered together around tables constructed in the design of a quilt pattern and talk. The work aimed to give ‘A voice and visibility to older women’ according to Lacy, who states that in mid 80s USA issues of gender were driving performance art and womens’ gender experiences were influencing art content.

The Crystal Quilt used Minneapolis quilters to make the textiles needed for the show and the accompanying quilt. The original performance was done to 3,000 people in a shopping mall in Minneapolis and broadcast live on US television. It happened on Mothers Day.

It’s a mesmerising piece, and anyone who makes quilts will love the way the quilt design influences the colours, tables and construction of the performance. It’s sorta tricky to explain, but the images below might help a little.

Go visit the Tanks before they close (possibly), if you have kids then check out the weekend schedules; when we were there the Sound Performance project looked like the best fun kids could have in an art gallery. It was heaving with happy, engaged children not wanting to leave, things have come a long way. 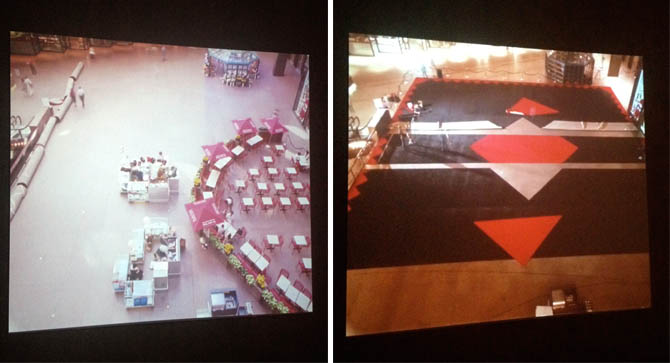 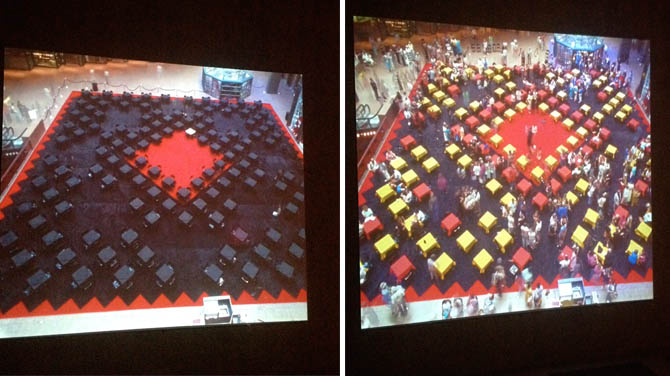 If we’re not careful, it’s very easy to fill our wardrobe with things that are ‘the same only different’, resulting in a wardrobe that doesn’t move on or stay modern. Before you know it your children are saying things like…