Not wanting to go all own-trumpet-blowing on you, but we’ve been ahead of the game here at TWR on a number of current issues, not just about older women in fashion, which we started writing about TEN whole years ago, but also about women (or lack of them) in the arts, which we first wrote about back in 2014. Now you can’t move for exhibitions on women artists, which is terrific. Perhaps its time to look at what’s happening  -or not happening for women – in other creative spaces, particularly in music

As part of Middleagedad’s new record shop, he’s recruited a team of highly knowledgeable volunteers, one of whom, Lynden Campbell, is a woman who works in the music industry as Head Of Synchronisation at Domino Publishing. We struck up a conversation about women in music and it turns out- surprise – it’s a hard industry for women.

So while reorganising the vinyl, Lynden and I talked about her (very successful) career and what she and other women in the music industry are doing to improve the gender imbalance. Last year women made up just 26% of the line-up at large music festivals and in the US, less than 10% of women musicians headline shows.

If you’re in the industry yourself, or have daughters thinking of a career in music (youngestson is just embarking on his own music-industry journey), then this might be a useful page to bookmark.

This week Lynden was at the international music fair BIME Pro, Bilbao – where as a pioneering PRS Foundation Keychange ambassador,  she helped finalise a manifesto intended to improve diversity – including LOTS more women – in the music business. 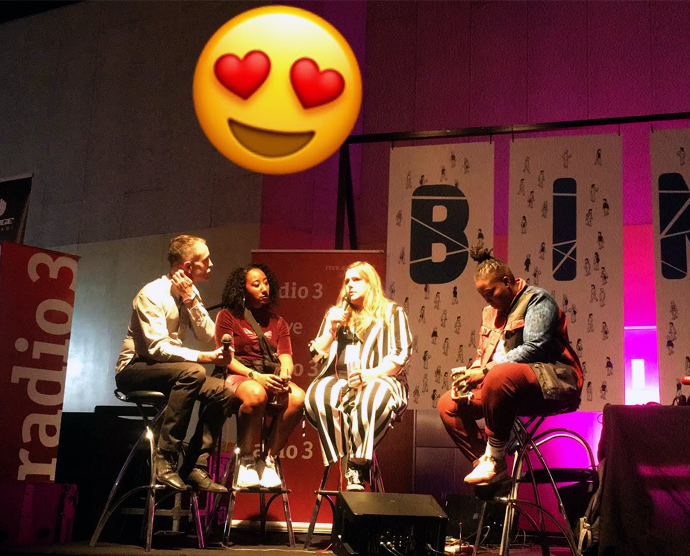 Lynden, in her cracking mono stripe trouser suit, being interviewed by Radio 3 with Tawiah and Jana Supernova. Image thanks to Chagall.

So Lyndon, what is it you do?

“I license music to film and TV and advertising. It’s called synchronisation and the music industry sees this as a key revenue stream to make sure the music business has a future. My role is to work with film makers and fashion brands to use Domino music in their content. “

Tell us about the Keychain initiative…

“To help improve the gender imbalance within the industry, the PRS Foundation Keychange Programme aims to empower women within the music industry and transform its future. For example it’s encouraging music festivals to sign up to a 50:50 gender balance pledge by 2022.

The music industry has always exploited differences in gender for commercial gain. It can be a brutally competitive business where only the strongest survive.  At the end of 2017, thanks to a nomination by electronic multi-instrumentalist Hannah Peel  I became one of the Keychange industry innovators. There are 60 of us, 30 artists and 30 industry innovators, all working to improve the gender balance.

I don’t agree with limiting anything by gender, age or sexuality. I think everyone performs better in a mixed, balanced group. I also felt like, why are we still talking about gender? I thought we’ve moved on from that but when Keychange showed me the film Play Your Gender by Kinnie Star, revealing that in some countries women aren’t allowed to use the drums, I realised, we still have a problem.

So, supported by Keychange, at Cannes Lions this year I launched an initiative called Crossfade, which seeks to future-proof the business of branded audio-visual media through cross-industry meet ups. I want to use Crossfade to bring together fashion brands, content creators and film producers to help people understand the potential. It’s cross-discipline, cross-industry and it’s about getting different spokes of the wheel together to improve how we do business.’

You’ve not always found the women in the music business that helpful right?

“I didn’t get a lot of female support starting out in the music business. My female colleagues have been quite controlling and I found that some women enjoy being a minority and that that’s part of their credibility.  I’ve had men nudge me and say – hey, you’d be good at that… but I’ve not had a lot of women. If I see women use flirtatious means to get where they want to get in music it really makes me angry and I don’t want to be associated with this type of behaviour. But now I see that many have had to be hard and protective to survive.”

“Incredibly, Keychange has taught me to be kinder to female colleagues. Now I realise that there’s huge benefits to being around women. It’s also been a catalyst to understanding my own strengths and challenging my own weaknesses. It has forced me to reflect on my experiences.

I realised there’s a lot of things I’ve done to cow-tow to men so they are less threatened. Now I recognise that I can adjust my behaviour to be more balanced. I have strong business principles but it’s not a natural position for me to brag or to be forceful, I don’t like to be thought of as ‘tough’. This supportive female movement is teaching me that it’s OK to own it, there probably aren’t that many women who have the same role as me and to accept that some people think I’m tough and not to be ashamed. In business, you have to have courage so if that’s being tough, then I guess I am. I hope that through Keychange everyone – male, female or trans – can reap the benefit of feminism.” 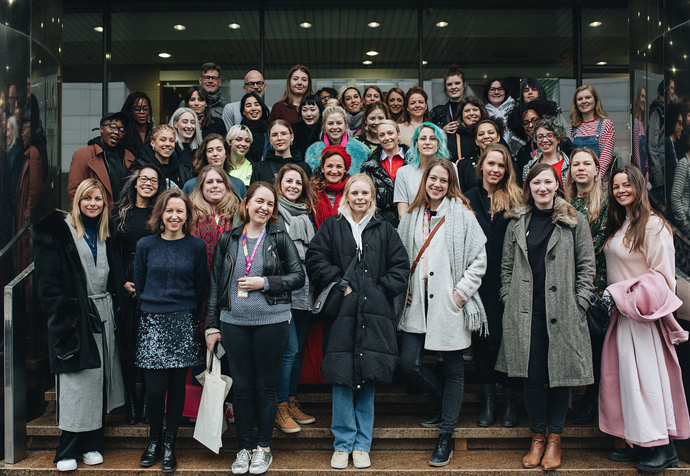 The Keychange team at Tallinn Music Festival, image via Keychange

You’ve been in the business a while now, how did you start?

“My music industry career spans the most challenging fifteen years the music industry has had to face. During work experience in a warehouse a male colleague suggested I write to EMI Records. It worked and in 2003 I joined the organisation at the tail end of the ‘fruit and flowers’* era. I was full of relentless optimism to offer ideas and solutions. Unfortunately, after acquisition by private equity, the greatest music company in the world became the side-show of two other major labels. I watched artists get dropped.

In 2009, I applied to Domino – one of Britain’s most successful, independent music companies. Domino shows me the power of independent thinking. That there should always be an alternative. There must always be choice. The music business depends on an ecosystem of independent minds with the courage to realise projects based on creative merit. I have watched the protracted rank and file of traditional business fall away whilst young digital brains become business leaders.”

You’re a strong advocate of face-to-face meet-ups, particularly with the digitally-savvy younger generation.

“Lost in technology we become lonely. As humans we recognise that to be fully engaged all our senses must be satisfied. There’s nothing quite like music to bring all those senses alive and to reconnect online and in person. Now, as we seek peaceful coexistence with technology we need to make an effort to re-establish safe face-to-face human contact. Well managed, physical meet-ups validate and enhance connections initiated by the internet.

Rather than feel threatened by technology, in order to survive we all, including the music industry, need to embrace technology whilst staying true to our own values and principles. To democratise those values we have to have safe forum that enable unheard voices to express their valid opinions. “

More on the Keychange Programme here

*Lynden tells us “Fruit and Flowers’ is euphemism for music industry excess. Specifically – spend on illegal petty cash items such as drugs and prostitutes – although we did actually all get free fruit and flowers. Without those free bananas I would have starved! “

The next H&M designer collaboration features the illusive designer Martin Margiela. The collection will hit stores on November the 15th. First shots by Sam…