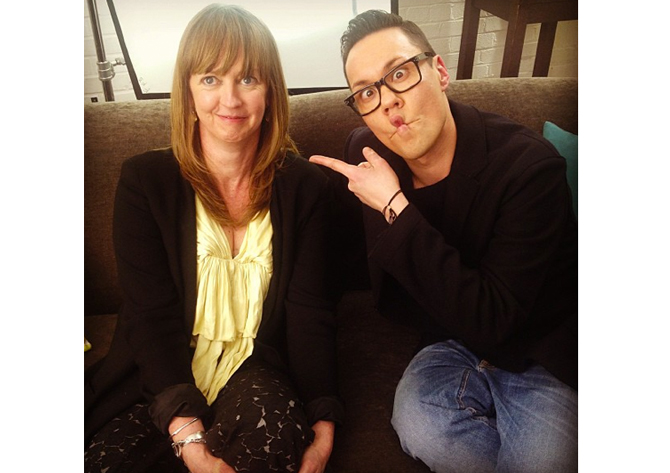 When we got the invitation to work with Gok Wan on a campaign for Activia, we did wonder if the organising company had seen our tweets on what we thought of his styling (well Jane’s actually, I’d never even SEEN one of his shows, which was hardly promising either).

We love the look of Gok and approve of what he stands for with his TV programmes which encourage women to love themselves as they are. Activia has recruited him to promote the Feel Good Pledge that encourages us all to appreciate the smaller things in life, which rather coincided with how Jane and I were feeling at the beginning of the year. Curiosity got the better of us -what was he really like? So I signed up for a day of working with him to find out.

Now it may surprise you to know that neither Jane or I are very comfortable in front of the camera, despite spending a great deal of time encouraging women to pose for us! We have discussed the idea of doing videos for the blog but can’t cope with seeing ourselves on film, we’re not even that keen on having our photo taken (there’s a blog post in this, maybe later…) so when I discovered the campaign included being filmed on a sofa chatting with Gok I felt completely out of my comfort zone. As the day loomed ever close I felt clammy with fear and almost didn’t go.

Since we were talking about our internal wellbeing rather than clothes, Gok didn’t do any styling, but I did have two gorgeous girls to make me more camera-ready, Angharad and Sue, who preened and buffed me all morning. I can totally see how this type of ‘love’ can be addictive, how can you not feel better when people are smoothing your hair and painting your nails? Anna Wintour has the right idea getting her hair and makeup done professionally every day. Sue and Angharad, I wonder how much it would cost to have them visit me daily?

You may well wonder about the taxidermy monkey…..we were shooting in the warehouse studio of my absolute favourite artist, it belonged to her. I wont tell you what we found in the fridges….

Enough of you Amanda, what about Gok? I hear you shout impatiently…Reader, he is a doll. Having watched a crew of hundreds (well, about 15) set up the sofa shoot all morning, I was rigid with apprehension when it came to actually being filmed, but he was kind, extremely supportive and super-friendly.

He is very good looking in real life, tall, elegant (navy cashmere blazer, navy crew neck sweater, jeans and Lobb brogues) with a no nonsense attitude you might almost call bossy…I am a very bossy person so I recognise the trait. “I hate wasting time’ he said in defence, as he organised the crew into re writing the script -pleasingly, he knows his grammar – while doing everything possible to make me feel at home. I REALLY wanted to make him my new best friend….

Gok’s also a techie-wizard. Part of the film involved us flicking through photos I had taken on my iPad as ‘feel good moments’ in my day. While we sat  on the sofa between takes, he showed me how to screen grab, downloaded Flipboard and demonstrated a level of technical brilliance – ‘I’m Asian, of course I’m good at technology!’ he said. Here he is with my iPad below (even my iPad had a make over, someone came and polished it before filming.) 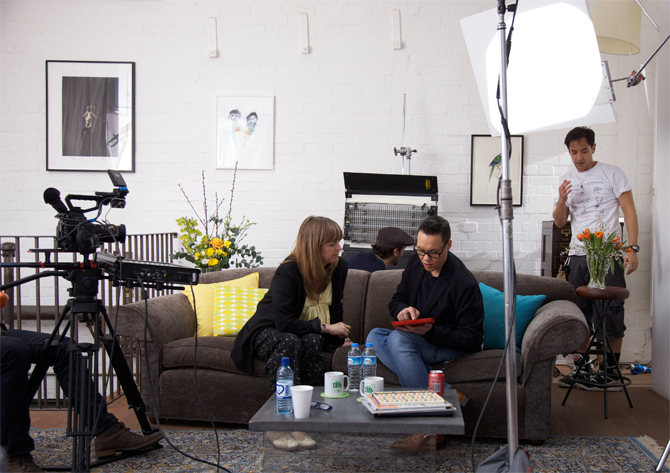 My favourite moment of the day occurred when one of many the crew assistants came and felt-tipped mine and Gok’s names onto our water bottles so they didn’t get muddled up, I could get used to this level of support in my life.

We talked a little about clothes- we were both wearing brogues, mine from Grenson, his from Lobb- and cooking. He gave me a tip about putting a tablespoon of coconut oil in my boiled rice to add a depth of flavour and to use it instead of vegetable oil to fry with. My lasting impression of him was that he’s smart and kind and I had to stop myself from stalking him on Twitter afterwards…

This is how many people were on the set to shoot one video….they were all extremely encouraging and friendly but goodness knows what they all did. Amazingly, Gok managed to steer me into actually saying the right things at the right time without too many shouts of ‘Cut!’

So it was a fun day, I’m still terrified of being filmed, but I now love Gok. By odd coincidence, I met him again a couple of weeks later when he was out walking his dog (No,  I wasn’t stalking, honestly….) and he stopped, chatted and was just as friendly. He even gave me a copy of his cookery book.

What of the film we shot for the Activia Feel Good Pledge? We will have it on the blog as soon as it is out of production and it will be on the Activia UK website too. If you can’t wait, check out the Facebook page for more details on the campaign.

Tomorrow, Sunday 3rd Feb, we will be acting as recorders/witnesses at Tate Modern Tanks space for the awesome Suzanne Lacy and her Silver Action…