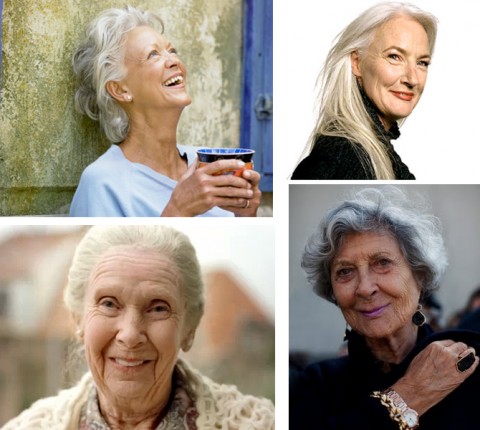 In the trends world we have been talking a lot recently about real beauty and the notion of celebrating imperfection. The idea of what is beautiful in cosmetic terms has been re-defined dramatically over the last twenty years and in the same way that older women have been relatively ignored by the media, the beauty industry has become guilty of making us think that growing older is something to be feared and avoided at all costs..

The “anti-ageing” market for skincare is a hugely growing demographic, which makes sense as the ageing population increases, but just as the fashion industry seems to be out of sync with how to target older women, the beauty industry is getting it equally wrong.

Some of the terminology around products for anti ageing skin care sound scary and verge on the irresponsible when targeting younger woman and are downright insulting if you are older. They almost all focus on the negative aspects of ageing and while none of us really want wrinkles, lines and saggy skin, aren’t they a sign of experience and a life lived, rather than something to be erased and blocked out. Just when did it become the norm to see any signs of getting older as flaws to be eradicated at any cost?

A recent conversation with a group of women (my age) astounded me, as several members of our party were able to list almost every wrinkle and line on their face and why they wanted (or had already in some cases) to get rid of them. I came away thinking I was either very confident and self assured, or completely deluded! But the simple truth is I simply don’t spend very much time looking in the mirror focusing on my (supposed) flaws. As isn’t that exactly what the “scientists” and cosmetic companies want us to do?

If they scare us enough into thinking ageing is the worst thing that can ever happen to us, will we all rush out and spend £100 on a pot of cream that will “change our lives?’ I’m not so sure.

I look at my mums generation who never wore sun screen, drank and smoked and pretty much ate what they wanted and they don’t look half bad. Their only skin care regime was/is a pot of Ponds or maybe even an Avon Night Cream if they are feeling flush and surgery is quite rightly reserved for when they are ill. Women of their generation may not be “flawless” (the current beauty holy grail) or line free, but they have character and the lines on their face represent wisdom and experience. I would far rather look at a face with personality, than a smooth, wrinkle free freak – which is sadly how I view older women who have had botox and surgery.

Some of the terminology used around anti ageing creams is downright ageist and wrong and personally I think its time we started to consider more seriously the effect some of the below phrases have on the way younger women look at the idea of growing older and also the impact they might have on our generation when we look in the mirror.

Those are just a few, I could go on forever. Personally any of those straplines would be enough to put me off buying any of those brands.

Vagendamag questions the way the media and brands talk to women on a daily basis and is loved by all the clever young women I know. But what about us older women, where is our voice. Isn’t it time we spoke out and said what we thought-  after all we’re the ones with the money!

Dove have always been outspoken supporters of “real beauty,” and have long featured, models of all shapes, sizes, ages and skin tones, without the smoothing qualities of Photoshop (remember Rene, my neighbour?).

Well now, they’ve taken it up a notch, and created the “unphotoshop” tool. An automatic “beautify” tool that can be downloaded and used to have the opposite effect of Photoshop –  to reveal the original untampered image.

Surely this the kind of thing we need to see more of, for our daughters sake and our own.