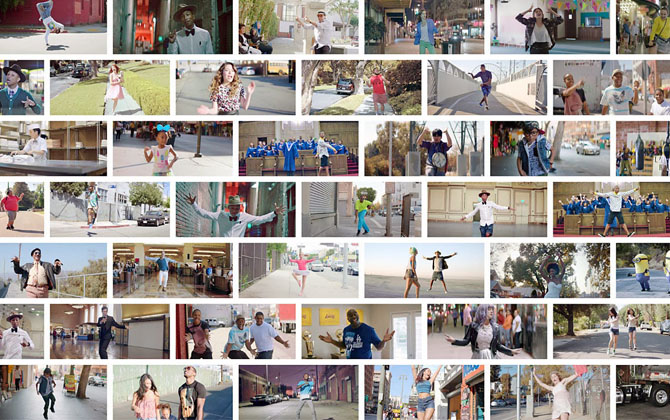 It’s Monday morning and probably raining. Spring feels a long way off and no-drinking January is beginning to wear a bit thin. Here are three things I am currently loving, which will hopefully make you smile on a dreary Monday.

24 Hours of Happy
Happy by Pharrell Williams was released in November last year, as the soundtrack for Despicable Me 2. He also created 24hoursofhappy, a website which is advertised as being “the world’s first 24 hour music video” and consists of the four-minute song repeated with various people dancing and miming along. Williams appears 24 times on the hour, and there are a number of celebrity cameos, as well as various characters from Despicable Me 2. The site allows users to navigate to various points in the 24-hour timeframe, including all 360 four-minute segments and each hourly segment with Pharrell.

Take a look at the official four minute video below and I challenge you not to smile, clap and perhaps even dance.

Patti Smith Sings Rihanna
As if we need anyone to tell us how cool Patti Smith is, but just in case you were unsure, watch this video of her performing Rihanna’s hit Stay, during her 67th birthday concert at Webster Hall. Patti declared it the best song of 2013 and then performed it with her keyboardist playing the part of Mikki Ekko. At one point, she forgot the words because she was nervous. We heart her big time.

Stylish older men
Remember ages ago (2009 to be precise) we told you about the book Gentlemen of the Bakongo?  Which incidentally is now worth a fortune – you really should listen to us, you know!

Well the fabulous Sapeurs (The society for the Advancement of People of Elegance) are now featuring in the latest Guinness advert, with the rather fabulous line “In life you can’t always choose what you do, but you can choose who you are”.
They really are the most elegant, colourful chaps, if only more men were that daring.

It’s not often I claim to have an idol, my days of school girl crushes are well and truely over, but my admiration for trend guru Li Edelkoort comes pretty close. Founder of the trend forecasting company Trend Union, Li…