Frankly there is no better way to see a film than with a glass of procesco in a private screening room at the Soho Hotel, and last week we were invited to do just that by the lovely people at YSL beauty.

Pierre Niney stars as Yves Saint Laurent in the film of the same name, which has been approved by Pierre Bergé, the co-founder of the Yves Saint Laurent’s brand, longtime business partner and former life partner of the Algeria-born designer. The film focuses on their romantic relationship, but there are lots of amazing outfits, glimpses into the couturier’s atelier and highlights from some his most influential collections, to keep the fashionistas happy.

Saint Laurent’s personal life wasn’t nearly as successful as his work. There were breakdowns, promiscuity and heavy drug and alcohol consumption, as well as a complicated love triangle, when Yves fell in love with the very handsome, Jacques de Bascher.

To be honest, I was probably more interested in his relationship with the super stylish Loulou de la Falaise, who made me want to float around Marrakesh in headscarves,  bohemian jewellery and flowery prints.

The film is both moving and inspirational and definitely one to see if you love fashion, beauty and a tragic love story. It’s out on March the 21st. 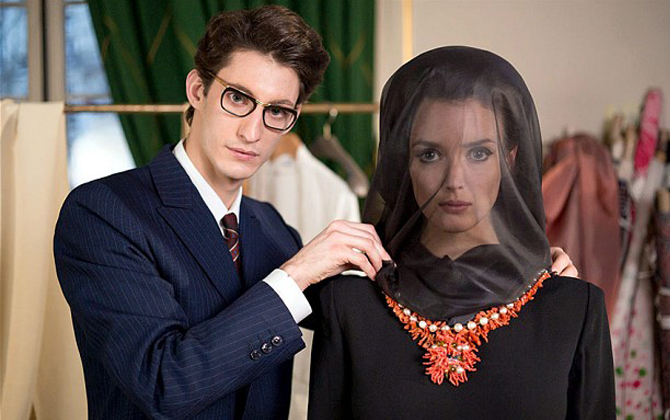 I love these old school badges from True Brit Knits, they remind me of the ones I used to wear on my old school tie….