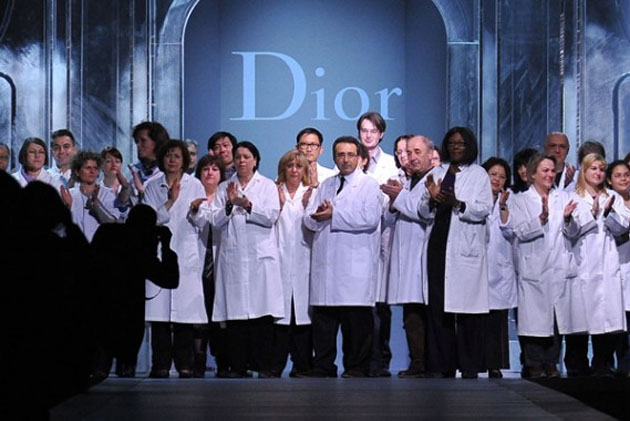 The whole John Galliano debate continues to fascinate us and after Friday’s celebrity no show on the front row at the Dior show, we fear the writing is on the wall for the designer who has been called one of the most influential designers of our time. The fashion pack may well have turned out to support Dior but the lack of the all important celebrity influence is telling. There is no doubt that The House of Dior, the jewel in the crown of the world’s biggest luxury group, LVMH, will bounce back from the scandal surrounding Gallianogate, but the question is, where next for John when he comes out of rehab?

One suspects he will not find himself inundated with job offers from the world’s most influential labels and he most certainly will not be asked to design either of the Kates wedding dresses! In a world where the label is God, who will want to proclaim proudly when asked about an outfit ‘oh it’s John Galliano’. Not me for one, (although I wouldn’t have worn his clothes before the scandal, if I’m honest) as this whole affair has made me look at the fashion industry from an outsiders point of view.

JG supporters have cited the stress of producing so many collections and the fact that he is a creative genius, for his melt down. There is no denying there is much pressure involved in producing so many new and inspiring collections on an almost continual basis, or indeed, that he is extremely talented, but so are lots of people in high profile jobs, who perhaps don’t have the luxuries afforded by working for one of the world’s leading brands.

While designers are happy to accept the trappings of success – and there are many, we shouldn’t forget that at the end of the day they are working for big corporate companies, and genius or not, with that comes a degree of responsibility. Over the last week I have heard inside stories from friends of friends who have worked with Galliano, and lets just say none of them have been supportive or in any way endearing. Whether they are true or just the stuff of legend, who knows, but they did make me think about how some behaviour we have come to accept as normal within the fashion industry is actually outrageous and unacceptable in today’s society. I am not suggesting that people go around spouting anti semitic rants on a regular basis, but simply that some bad behaviour is often excused as the perpetrator is either seen as highly creative or over stressed.

A junior doctor who has worked 24 hours in a row is stressed, the headteacher of an inner city comprehensive school with 2000 pupils is under pressure, but isn’t the kind of pressure a fashion designer is under slightly different? At the end of the day, it’s only frocks!

While I agree with Disneyrollergirls comments that designer are not machines and think that that there is a fine line between extreme creativity and insanity, I feel it’s perhaps time that fashion entered the real world and stopped allowing our creatives to get away with behaving like divas, because at the end of the day someone always gets hurt, and it’s usually them!

John GallianoLiving in a fashion bubble

Our roving reporter Elena Bowes has just got back from another of her trips to New York, where she’s been busy visiting (mostly) art…