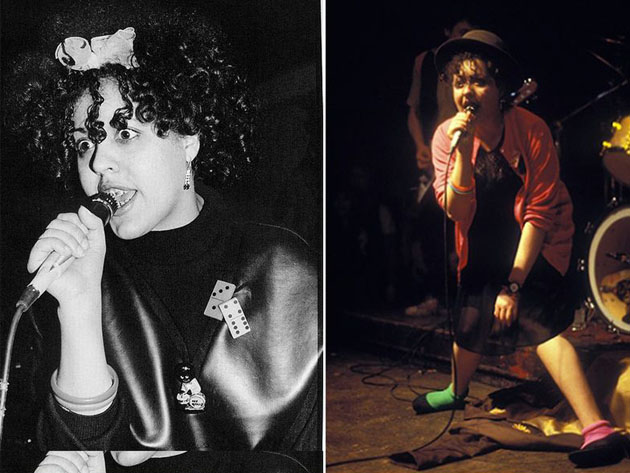 Inspired by an early Sex Pistols gig on Hastings pier, Poly Styrene formed X-Ray Spex when she was 18 and went on to make some of the most iconic singles of the punk generation.

Warrior in Woolworths from the brilliant Germ Free Adolescents album is on my Desert Island playlist and I still love her unique voice and brilliant sax playing (much to the teens disgust).

One of the first female punk singers, Poly Styrene was short and round, with huge hair, weird outfits and braces on her teeth. She wore second hand clothes before they became vintage and was one of my earliest style icons.

Along with Siouxsie Sioux  and Ari Up, Poly Styrene was an unconventional role model for a generation of girls for whom style meant being individual and subversive.  Proud to be a feminist, the opening lines of her first single Bondage Up Yours summed up her attitude “Some people think little girls should be seen and not heard. Well I think, oh bondage, up yours.”

I felt so sad when I heard about her death from cancer this week, as not only did I love her music, she also she inspired me to be experimental with clothes. My favourite Poly Styrene influenced outfit as a 17 year old foundation student, included a bright pink crimpline 60’s skirt suit, a yellow cardigan worn back to front, yellow tights and black and white winkle pickers. Oh how the people of Hull laughed, back in the day!!

If there is a heaven, I like to think Poly Styrene will be wearing something similar up there. RIP a true style icon.

ABC carpets in New York has long been one of our favourite shops in the world. A fabulous 10 floor emporium stacked with new and vintage eclectic homeware, its like exploring your rich, well travelled, great aunts attic. We never…