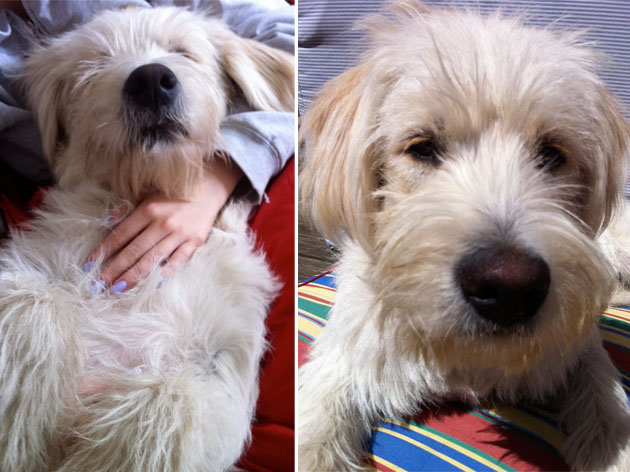 My dog has the kind of face that makes people smile. As we wander through the mean streets of Hackney he is met with huge grins, jolly greetings and kind words. One woman even asked me if she could kiss him. I was with teen daughter and we were slightly taken aback, ‘er okay’ we said, muttering ‘Freak,’ under our breath!

Apparently he looks like a mixture of Limahl from Kajagoogoo and Falko, the dog in Never Ending Story, But his cartoon character, 80’s pop sensation looks are very very deceiving. Little do those dog kissing fans of Archie the flying wonder dog know, beneath that giant hairy toddler exterior lies a beast, a duck eating, chick scaring feral beast, to be exact!

Our early morning walks in the park are usually a mixture of brisk power walking/stomping if I’m on my own, or slow strolling/coffee drinking/gossip, if I meet up with one of my many dog walking friends. On the days I work from home, the park provides my morning coffee/water cooler conversation and I can often be there far longer than I intended.

It was one such day last week when ‘the incident‘ occurred. I was strolling and chatting (well moaning actually, but don’t tell our husbands) with Roxy the Staff’s mum (ok ok , the park is full of menopausal middle-aged women with impending empty nest syndrome – don’t judge us!) and I wasn’t really watching where the giant hairy toddler was. He is usually quite good at following me, unless of course there is a small child eating an ice cream, tennis ball, snogging couple, picnic, football/softball match, skateboarder or power walking Turkish women to distract him!

We were deep in conversation when I heard shouting.’What’s all that about’, I thought, as I saw a Park Ranger waving a stick at me, ‘and just where is Archie’? Then I spotted his little (actually make that huge) furry head bobbing along in the fenced off river area of the park and he was chasing something. It was a duck, an angry mummy duck and her four tiny chicks, and people were starting to get slightly hysterical, shouting ‘who owns this dog’?

I was tempted to pretend he wasn’t mine, but I had tried that tactic when the kids were toddlers and it never worked! I ran (I always think running is a good idea in a crisis) and tried to get over the fence. Here’s a tip, mid calf length spotty dirndl skirts are a good look for a vintage dog walking retro vibe, but not if you are trying to scale a spikey wooden fence!

I finally got into the water area and employed my best Barbara Woodhouse dog control tactics – screaming at the top of my voice! He of course ignored me and carried on his Olympic winning doggy paddle, after the by now almost hysterical duck. When a dog has decided it’s going to chase something it becomes fixated and feral and almost impossible to control. Well thats my excuse anyway and I’m well aware that running along the side of the river screaming, possibly isn’t what Cesar Milan (The Dog Whisperer) would advise.

Ducks are cleverer than you think and I really wouldn’t like to get into a confrontation with an angry one, so I was torn between worrying about it’s safety and what might happen to the dog if he caught it, as he was getting very very close. I had also been joined by several other people offering ‘advice’ which is always helpful! It was the kind of situation I would get very involved in, were I an onlooker, and I was well aware of how bad it looked. Our park has the potential to be a hotbed of conflict between dog owners, joggers and parents and I was contributing to in it in a big way!

Just as I was contemplating dramatically diving in the water – which would have been horribly dangerous (and potentially hilarious) as it’s not very deep and I’m scared of water- he decided he’d had enough! Just like that, he was tired and decided Duck a La Archie wasn’t for him. A lovely woman helped me get him out and assured me her dog did exactly the same thing (you can always rely on another woman to make you feel better) and Archie shook green slimy water all over both of us!

So dear readers, if you are wandering the streets of Stoke Newington and come across a large blonde Labradoodle with the face of an angel and the body of a huge teddy bear, don’t be deceived, he is not what he seems. Be warned and do not attempt to kiss him!

A couple of years ago I wrote a feature for Viewpoint magazine about pet trends. Treating pets as humans was something reserved for the…