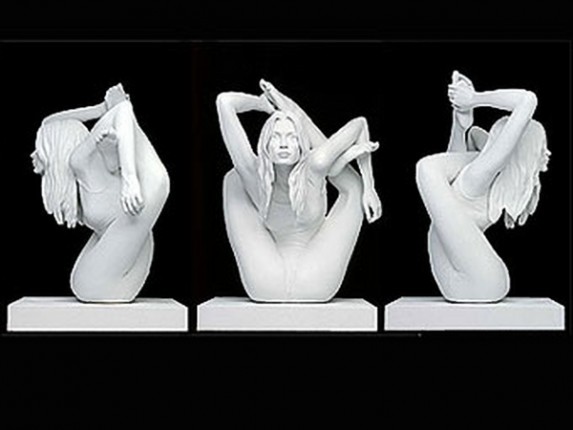 Kate Moss by Marc Quinn, via The Guardian website

“We are not in a competition here”, says my yoga teacher, serenely from her perch at the front of the class, “we all have different bodies and are at different stages of life, do not compare yourself to others’. Fat Chance in this West London yoga class, let me tell you.

This week, my normally gentle Sunday yoga class was disrupted by two interloping men. Now, normally the yoga classes I go to are made up of 80% women. We have a couple of beautiful male dancers who occasionally grace us with their presence and who are so far ahead of us in skill that all we can do is (covertly) watch and sigh. Occasionally, a few humble blokes join for a lesson in order to lengthen their hamstrings or sort out a bad back and we have a couple of delightful octogenarians gays who are keeping their joints ticking over, but mostly it’s the same women who turn up every week. We are competitive even though we are told not to be, we just can’t help it, we look at each other’s bodies and yearn to be as thin or bendy as the best in the class.

But NOTHING makes us feel as competitive as a bloke who thinks he’s super fit turning up to yoga because he’s got a bit of time on his hands and it slots in between the gym and his next spinning class. Men think yoga is a non-sport, mostly I think because it tries not to be competitive. My sons think yoga is ‘stretching’ and therefore doesn’t count as exercise at all, even though I can stand on my head and do an impressive crab pose. The two chaps who sauntered cockily into our class on Sunday thought they were in for an easy ride having come straight from pushing weights in the gym (where ‘proper’ exercise is done) to ‘warm down’ as they put it in our class.

Our yoga teacher (The Swede; blonde, from Stockholm and although over 60 has the body of a 20 year old) asked the newcomers if they had done yoga before and they said in loud, braying voices ‘No, but it’s yoga right? How hard can it be?’

Silently, every woman in the class bristled, did a feminist-group-yogic-mind-hug and got to work showing just how frigging hard work yoga is. Having done her whole ‘non competitive’ mantra introduction at the beginning of the class, The Swede took us through a class that made even those of us who have been coming for years break out in a sweat. Those poor men didn’t know what had hit them, we ‘flowed’ (ie didn’t stop for a rest) through dog downs, salute to the sun and half moon balances that had the men wobbling around like confused babies.

Men maybe strong but women are naturally bendy and I swear The Swede added in as many tricky bends and flexes as she could to prove the point. Because as a group of mostly over-40s women we knew there was a point to be made. Yoga, when done properly, is hard. Blokes who think they can add on 90 minutes of ‘warm down’ stretching to their gym schedule need putting in their places.

Just to add a little tension (although she’s rather die than admit it) The Swede put in a couple of extra moves for ‘those of you who are advanced in your practise’, which meant us women who’d been coming for ten years and who knew which way to point our hip bones in trikonasana. But the men reckoned thirty minutes in, that they were ‘advanced’ enough to try. Nothing infuriates yoga ladies more than upstart newcomers, particularly if they are men, considering themselves ‘advanced’ just because they can touch their toes (they are all curving their spines, soooo wrong) and The Swede brought them down a peg or two by dissecting their stances and humiliating them back into beginner poses. And we all tried just that little bit harder on those poses to show JUST how it was done,

And then we reached the point in the class when our energy had risen and our shakras were aligned and The Swede knew she could pull a winning move from us. She put us into plank, which looked easy to the men, even when she had corrected their sticking-up bums and wobbly hand placements. And we held it for ages and the men couldn’t believe it could be so hard and finally crumpled, beaten, amazed that they were unable to do something that looked so simple.

We women meanwhile, held on even though it was killing us and our wrists were burning, smiling inwardly, knowing that we had won a small victory. Eventually we are told to relax, which we do joyously, remembering all the while that yoga is a non competitive pastime. Namaste.

One week before important family get together at MAM.com’s house Press 1 if your call is about an existing repair, press 2 for our parts department, press 3 if your appliance is under a year old, press 4 if you…