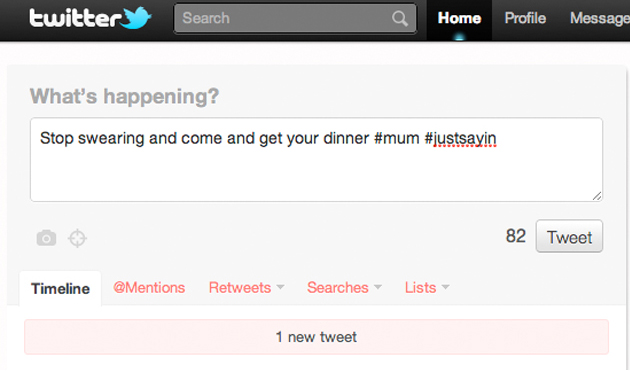 In our house it tends to be the oldies who adopt new technology first. MAD and I like to think of ourselves as early adopters and knowledgeable about new trends, so back in the day when we told the teens about this ‘new thing called Facebook’ they weren’t really interested. ‘yeah whatever’ they mumbled, getting back to chatting on MSN, or uploading pictures of themselves with wonky pouts and kooky hand gestures onto MySpace.

I think the reason teens appear to lead the way in technology is because when they do finally adopt something new, they embrace it full on and drop everything else. Quite frankly I could have saved News Corp $580 million, if they had bothered to ask! Just as they were about to buy My Space, the teens were all switching over to Facebook, never to return, leaving MySpace a sad and lonely place to socially network and News Corp with a great big chunk of nothing!

When the teens did decide they liked Facebook there was no holding them back, within a matter of weeks they had gathered over 500 hundred of their closest friends, people they once passed in the corridor at school and the cousin of someone they met on holiday in Cornwall, and proceeded to keep all lines of communication open at all times. They obsessively check their pages, update their status’s minute by minute, snoop on people they hardly know and spend hours on FB chat.

We had a brief period of FB friendship until they decided I was using it to check up on them (they were right) and I was de-friended. Quite right too, I have my life, they have theirs and while I am happy to be a liberal ‘cool kind of mom’ I really don’t want to see pictures of half naked teenagers downing vast quantities of vodka – in my kitchen!!

So I have kept Twitter to myself over the last two years, no need for them to know about my secret little world and the source of nearly all my information. Twitter is a grown up place where I chat to friends, meet new people, find out things and laugh – a lot. I can drop snippets I have read on Twitter into a conversation – celebrity gossip, local news, facts about current affairs –  and appear well informed, interesting and witty. Why, I can sometimes even sound like I know what I’m talking about and make the teens listen to me. ‘How did you know Kendal Jenner was on the pill before it was on tv?’ (I realise this means nothing to most people – but trust me it’s important) exclaims teen daughter.

As my obsession with Twitter grew, the family started to ask questions as I laughed over my phone while watching a TV programme, or frantically Tweeted to join in the collective conversation. Why are you always on Twitter and  ‘just who is this Grace Dent’ teen sons asks. Oh just the TV critic on the Guardian, I answer reluctantly. “I might get a Twitter account’ he says casually. NOOOOOOO! This is my thing, get back to Facebook where you belong!

The next time I click onto Twitter I don’t recognise what I am seeing, where is Jenni Murray and India Knight, who are these people I’ve never heard of? Why is Hypebeast on our timeline and who the Hell is Benny Gold? Of course it’s teen sons page and I have entered another Twitter, one where everyone is young, doesn’t use punctuation and talks in slang. I don’t like this Twitter it’s like entering a party full of 20 somethings and attempting to take to the dance floor, I need to get back to my nice middle aged, radio four type Twitter.

Over the next few days teen son and I have many discussions about how to get more followers (he is impressed by our 1850 followers) and who is funny or interesting to follow. I follow him, but stop after a couple of days, as he is in the young Twitterworld which I don’t want to be part of and besides, he swears and telling him off by Tweet is so not a good look for either of us.

I am sure in the future there will come a time when we all meet up again on social networking, but for now we will keep our online worlds as separate as possible and stick to meeting up around the kitchen table – the old fashioned way.