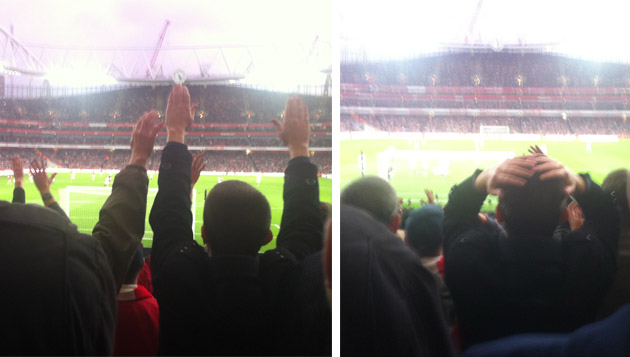 Growing up in a family of sports fanatics meant every weekend was either devoted to the playing or watching of various different sports Consequently the theme tune to Match of the Day is enough to make me strop to my bedroom, to backcomb my hair and listen to Siouxsie and the Banshees. As a teenager, my Dad and brother’s obsession with football,cricket and golf made me retreat even further into my non-competitive, creative world and contributed to me feeling like a freak trapped in Northern suburban Hell. Don’t get me wrong I had a happy childhood, but I often felt like and arty alien from Planet weirdo!

Luckily M.A.D can take or leave sport and teen son is more interested in extreme rather than mainstream sports. So watching ‘the game’ on TV isn’t a big thing in our house, thank God.

We do however live within walking distance of the Arsenal ground and being a ‘gunner’ is something of a way of life round our ‘endz’. It’s hard not to know there’s a match on, when you can hear the sound of the crowd from the back garden and the collective mood on a Saturday night very much depends on the days score. We have several friends who are season ticket holders and occasionally when they can’t make it, they offer us their tickets. M.A.D and teen son usually go, but since said son got himself a Saturday job, there has been a spare place. So this week when the opportunity arose, I decided to give it a go.

Since having children, any kind of collective gathering of people has the ability to make me emotional. Maybe it’s something to do with coming together as one and a shared passion, or perhaps it’s just that some kind of emotional tap gets turned on, the minute you give birth, whatever it is, walking to the ground I could feel this was going to be one of those events.

The Arsenal stadium is set in amongst the half rich/half poor area of Highbury, but the Range Rovers and Yummy Mummies were nowhere to be seen on this occasion. This was old Islington, where generations of families and friends were doing what they had always done, going to the match. The burger and chip vans outside the ground were manned by proper cockney geezers who had clearly mastered the art of banter and then some and I felt I had stepped back in time to the London of the 1960’s.

Entering the stadium is an almost religious experience, as the atmosphere is amazing. The huge impressive structure is nothing compared to the overwhelming feeling of pride and love – yes proper love, but in a male way –  the fans have in their team. For once in my life I felt I wanted to be a man. Because despite the fact there were lots of women there, this experience was all about being a man, and lets face it, men don’t have many occasions where it’s ok to get angry and shout really loudly, cry, jump for joy and hug the man next to them. In fact now I come to think of it, nor do women.

I had listened to a radio programme earlier in the day where someone had mentioned how everyone should try to find a pastime to nourish their soul, and in a funny way this was exactly that. To some people, it looks like a bunch of overpaid young men chasing a ball around a hugely expensive pitch, but to the grandads, fathers, sons, and best friends (and some women) who follow ‘their team’ through the good and bad times, it’s a way of life and an opportunity to loose themselves for 90 minutes every Saturday.

So while I don’t think I’ll ever become a die hard Gunner, or God forbid start watching MOTD, I will take any opportunity I get from now on to go to a live match. Apart from anything else, I love the songs, the witty banter and the stupid comments the crowd shout to the players, “come on mate it ain’t f…..g ard” and “don’t concede” were two of my favourites on Saturday, and I was in stitches when the tannoy announced a substitute for the opposition and the whole crowd shouted ‘who’. The man next to us said, ‘they shout that even when its Wayne Rooney.’

Lately we are seeing lots of positive changes in the way the world views older people. Soon the term anti ageing will be a thing of…