Do you remember the terrific opening graphics to the Stephan Spielberg film Catch Me If You Can with Leonardo DiCaprio? The pair who designed them, Olivier Kuntzel and Florence Deygas are renowned French narrative illustrators who have produced this sweet video to support the launch of Guerlain’s big new perfume for this year, La Petite Robe Noire. The bottle, packaging and accompanying graphic support all feature the pair’s charming sketches and it’s very chic.

We are partial to a bit of illustration here at TWR (ahem, we are illustrated to the right here…) and this is a neat move away from the inevitable, highly polished-up vision of a supermodel or celebrity we’re used to as the ‘face’ of a perfume. Or those frankly ridiculous glossy trailers offered by some luxury houses featuring panthers and flowing chiffon (I’m looking at you, Dior). Instead this is a neat way to build a personality for the perfume and might stand out as refreshingly different in an already crowded perfume department.

My interpretation is that the perfume is aimed at the 20-35 year old market, although Guerlain insists it work well an all ages, but all the under 35’s I’ve sprayed it on have loved it but those older have been less keen. Surprisingly I like it too, although I don’t think I’ll be swapping from my favoured Mitsuoka any time soon, but this is a new Guerlain classic for a younger generation.

So, how does it smell….First hit is of a deeply rich cherry, sweet but also smoky with a dash of patchouli. It has a vague hint of almond and rose too which gets stronger as it warms on your skin. Once the initial rush has gone, you are left with an appealing rosy-cherry warmth that  is half way between caramel-y bakery-shop sweet and sugary candy shop. The Guerlain ‘accord’ (like the brand’s olefactory handwriting, added to every Guerlain scent so you recognise the ‘family) of tonka beans, bergamot and vanilla gives it class.

I’m generalising madly here but I think anyone over 35 might pass on this as too sweet to wear, but anyone younger has grown up with a sweeter tooth in the perfume world (blame those sickly celeb scents) and will like this more mature evolution on sugar-cute. It launches exclusively at Selfridges on 24th June and nationwide from 24th July. Already a big hit in France (Guerlain say it is currently the number one best selling perfume in France) where it was launched earlier in the year, I suggest you sniff it on your next trip to a Guerlain counter and see what you think. 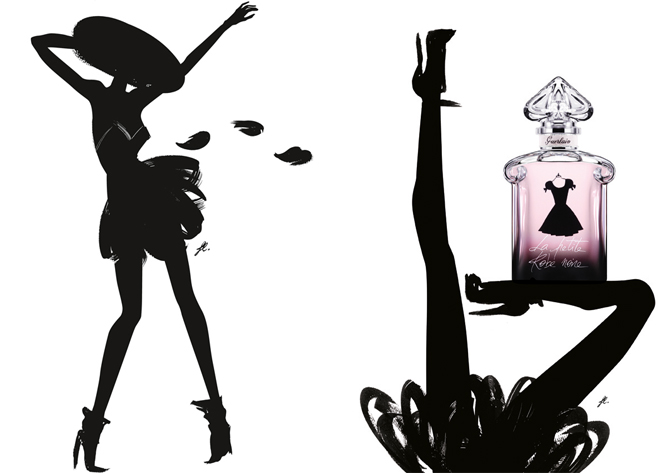 This Sunday we will be doing our Christmas pudding….after the success of last years Christmas cake (recipe here if you want to do that again this year…anyone have good pictures of last year’s cake they want to show us?) we’ve…