A while ago we wrote about the enthusiastic Mak Gilchrist and The Edible Bus Stop scheme, an idea for brightening up her street and getting her community to garden with her around their local bus stop. A year (and those London riots) later, Mak and The Edible Bus Stop team are showing how gardening could actually be an inclusive way of solving some of the issues highlighted by the unrest last year with the Riot Of Colour garden designed by Will Sandy at Hampton Court Flower Show.

“One of the reasons people rioted was because they felt excluded from their communities’ Mak told us, ‘the idea behind our bustop scheme is to get people taking control of their environment and feel included in something worthwhile to them’. The aim of The Edible Bus Stop project is to organise local communities to take over neglected public spaces and use them more productively in gardening schemes, to both improve the look of the place and build a strong sense of belonging.

Mak’s idea has taken off, Lambeth council are to co-fund, with Bret Aggregates, the re landscaping of the original Edible Bus Stop in Stockwell and there are new edible bus stops planned along the 322 bus route in Clapham Common, West Norwood, Crystal Palace and Brixton, allowing those local communities to ‘green up’ and come together around an otherwise dull urban area- their aim is to create the first edible bus route..

She is inspiringly pro community and has done incredibly well to get so far in such a short space of time, not only has she organised, along with creative director Will Sandy and garden designer and installation producer Liz Seymour, the Hampton Court Show garden, but on Sunday night they move straight to the new London Pleasure Garden project to build a 130 metre installation -five times the size of the Hampton one. If you miss the Hampton show then I urge you to put this in your diaries as the gardens are an inspiring regeneration project that is set to be a major London attraction in the autumn. Organised by the team responsible for Shangri-la Fields at Glastonbury Festival  the area aims to become a new artistic and creative hub for east London, just take a look at the arts schedule here, it looks fab. it’s open now but areas are still being built and The Edible Bus Stop hopes to have its site finished by the end of July.

What Will and Mak want to do now is persuade corporations to invest in the project and give something back in a sustainable way to the community. If there are any big banks out there wanting to clean up their image, this might be a nice place to start. Supporting a bus stop is also remarkably good value for money, as Mak says it’s all about balancing high end design aesthetics with low end budgets to create community growing spaces that puts the sense of belonging back. Mr Diamond could probably fund a whole bus route with his loose change. The design inspiration for the Hampton Court Show was the riots of 2011, imagining how nature might creep up on a damaged urban landscape and soften the brutal edges with flora, including using graffiti artist Kelly Graval, aka RISK, a contemporary of Banksy and big enough to rock up with his own entourage. Being American, he was deeply chuffed to be painting in the grounds of a royal palace, according to Will. 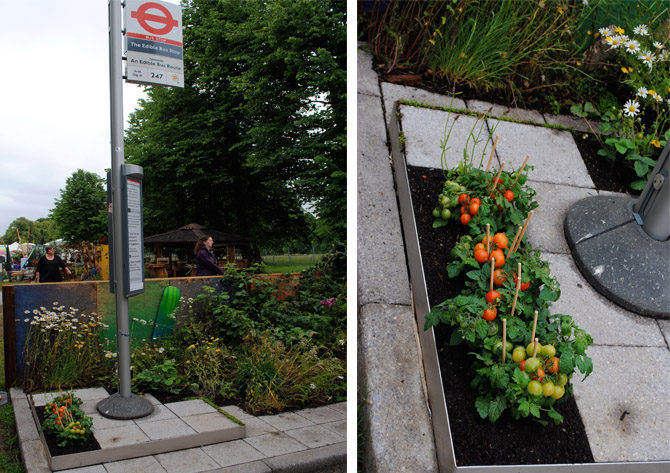 The bus stop, complete with tomatoes and wild strawberries. 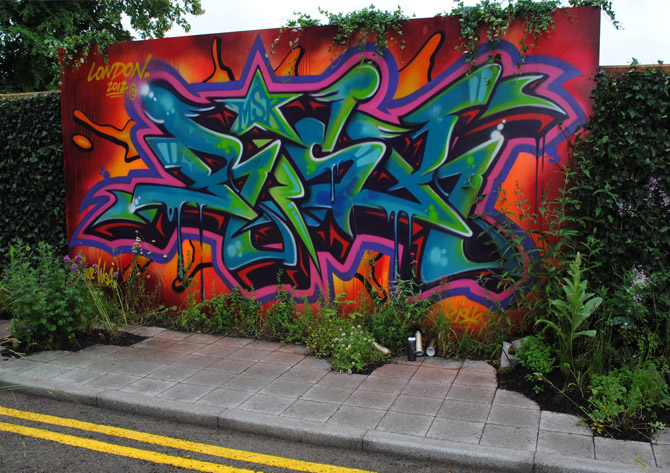 The wall art by RISK, which will be transported along with the taxi to the new London Pleasure Gardens site. 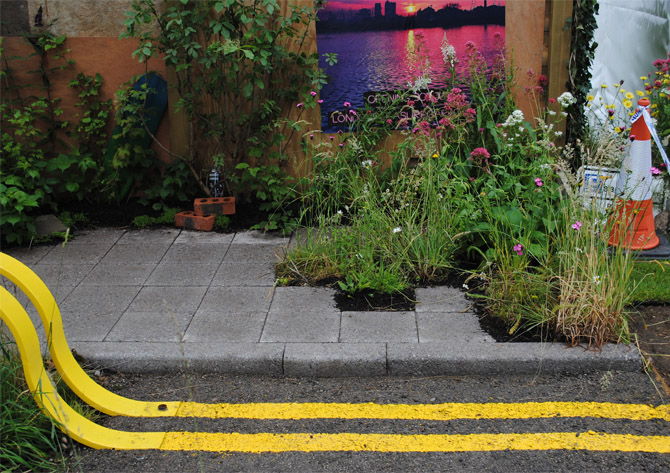 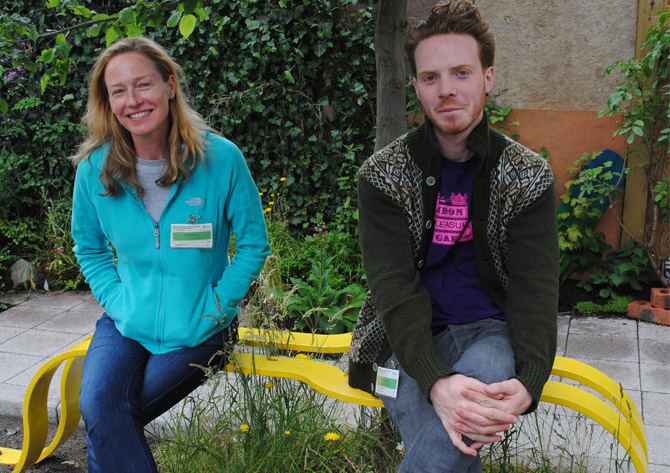 Mak and Will, exhausted from having worked a month with no sleep or days off, on the double yellow lines bench.

If you are heading to Hampton Court Flower show this weekend, make sure you go and say hello and for anyone wanting to improve their company’s Corporate Social Responsibilty ratings, can I suggest you get in contact with Mak and Will here.

Nice video of the whole idea below….