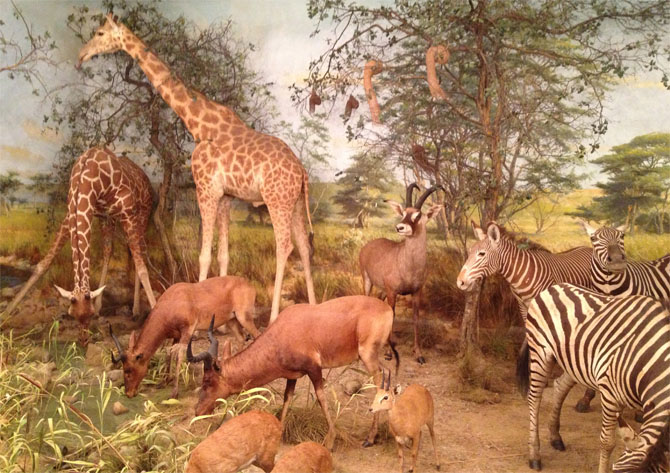 As the long summer holidays approach, can we recommend anyone with small boys, a love of taxidermy and/or Africa plans a trip to the Powell-Cotton Museum in Birchington? It’s a gem.

The current thinking is that Margate (which is three miles down the road from Birchington) is the cool new place to visit, what with the Turner Contemporary gallery and all, but in our opinion it’s not. The Powell-Cotton museum is the best kept secret in the museum world and will keep you and your children entertained for hours.

Middleagedad and I discovered it accidentally on our way back from the Margate Turner and it made us wish our three sons were small again. And that doesn’t happen very often.

In a nutshell, Major PHG Powell-Cotton shot or bought a great deal of Africa during his lifetime (1866-1940) and sent it back to his home in Birchington,  Kent, where he ended up with so many animals, guns, bugs, jewels, pots, textiles and such like that he built extensions to his house to accommodate it all. Including some extraordinary, life-size dioramas (stage sets) of African animals, such as the one above with giraffes, there’s even a full size elephant. it’s all set out beautifully with handwritten labels and a slight old-school feel to the place. It (almost) puts the Natural History Museum in the shade….. 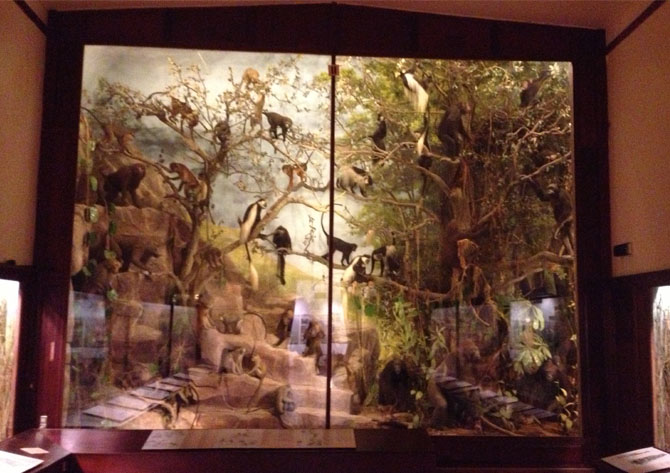 Now of course it horrifies us to hear of so much shooting but in Powell-Cotton’s time things were different and however we now feel about such slaughter, Powell-Cotton was so meticulous in his recording of detail and preservation of the animals he shot that the museum gets scientists from across the globe using it as a major resource about Africa’s animals. They even extract the DNA from the carefully preserved hides. Records show he paid a good price for everything he purchased and was nice to his workers and he must have adored Africa as he spent his whole life on a permanent expedition and was hardly at home for longer than six months.

His plucky wife and daughters went with him, pretty unusual for the time and both daughters continued the scientific work after their father died, travelling alone into remote parts of Angola. 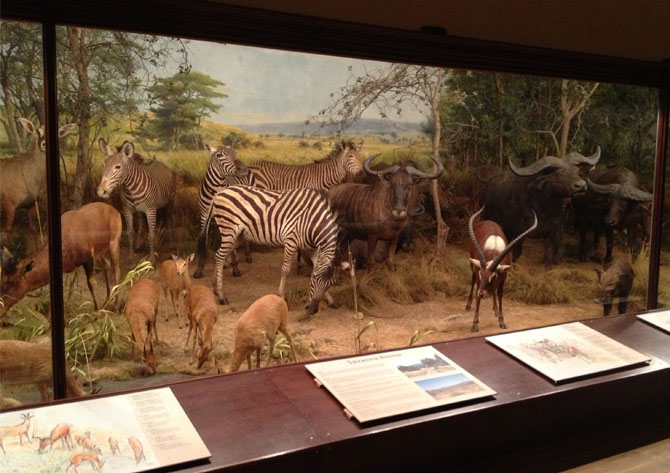 The size and scale of the dioramas is amazing, if you love taxidermy this is your sort of place. The African plains full of animals and the monkey forest were enough to make me gape, but the lion attacking buffalo- complete with dripping blood- was truly terrifying. Powell-Cotton (not short of a bob or two) had all the taxidermy done by the London firm Rowland Ward, considered the best company in the world at it, with animals such as the elephant being shipped down to Birchington by train in an open carriage, due to their size and often with just a dust sheet thrown over them. It must have been quite a sight in 1909, when elephant sightings anywhere were pretty rare… 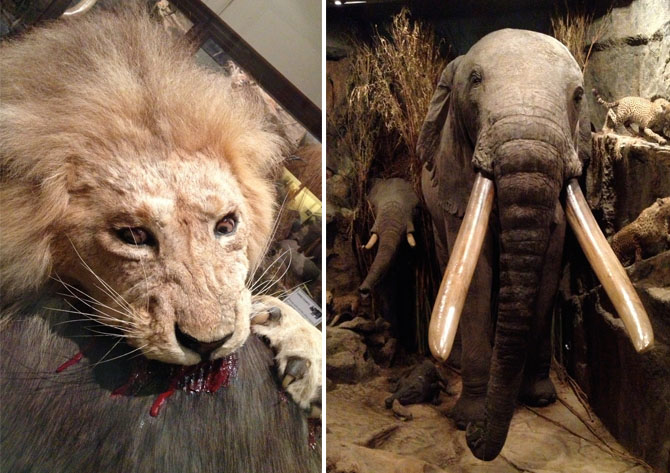 It’s a brilliant place for children, speaking from experience I know my boys would have loved everything if we had been when they were young; the expedition stories, the snakes and monkey foetus in formaldehyde, the huge gun and dagger collections and the cases full of of giant, scary, African bugs….I have little experience of girls and how they feel about this Boy’s Own adventure stuff, but I’m guessing most would love it too…. 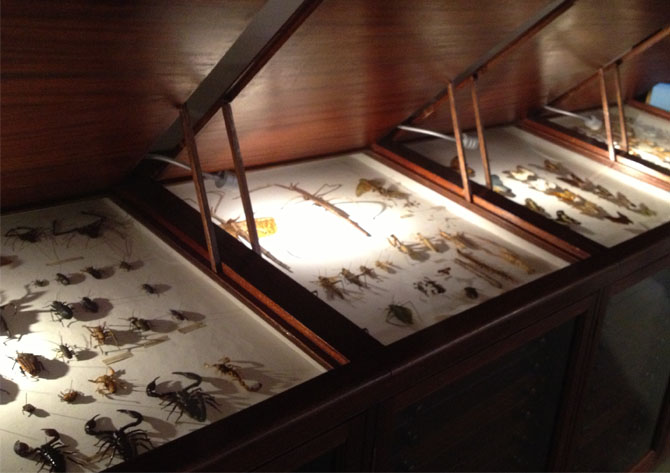 There’s also a collection of musical instruments, some which can be played and lots of jewellery and textiles, don’t you love the patchwork horse quilt below? 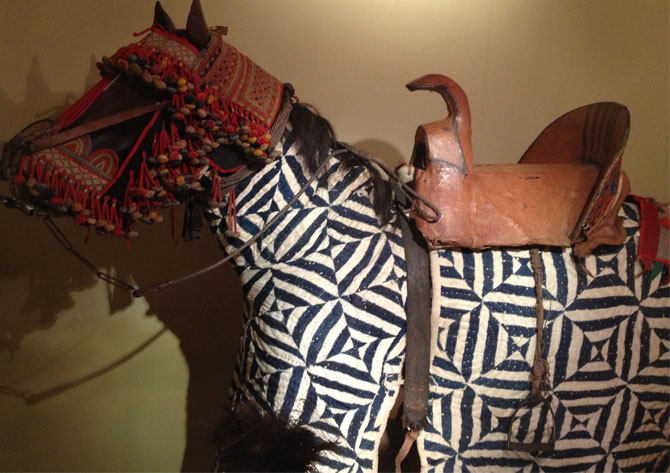 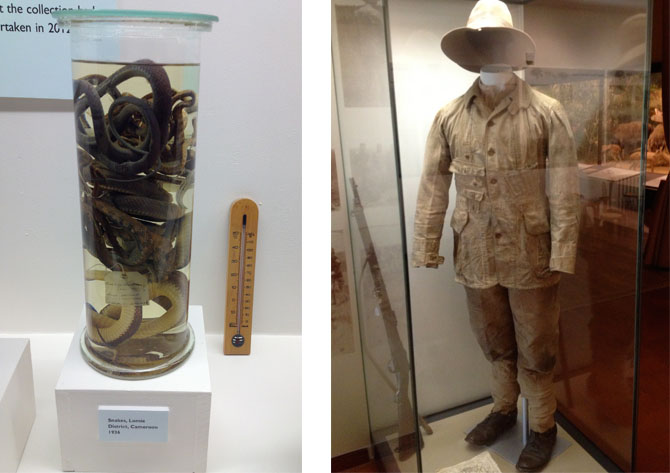 The safari suit Powell-Cotton wore when he was attacked by a lion is on show, with clawed rips clearly visible…. 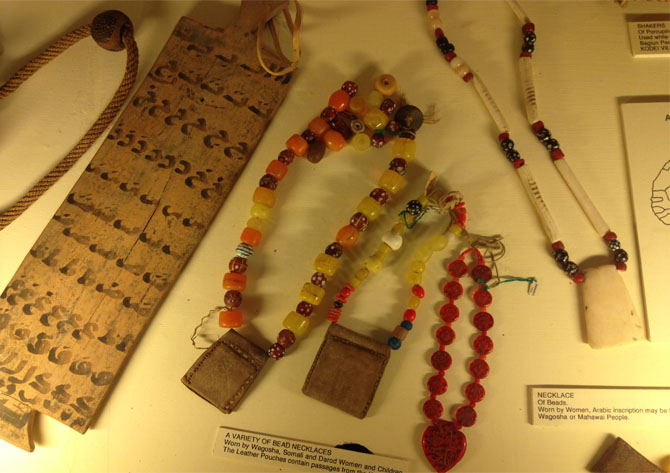 There’s a great cafe, beautiful gardens and the sea close by, so really everything for a great day out, specially if combined with a trip tp the Margate Turner Gallery. If you are in the area, don’t miss it.

The Powell-Cotton Museum details can be found on the website

If you are a fan of Eley Kishimoto’s graphic prints you will love their latest collaboration with Clarks. The nine-piece limited edition capsule collection will be available…