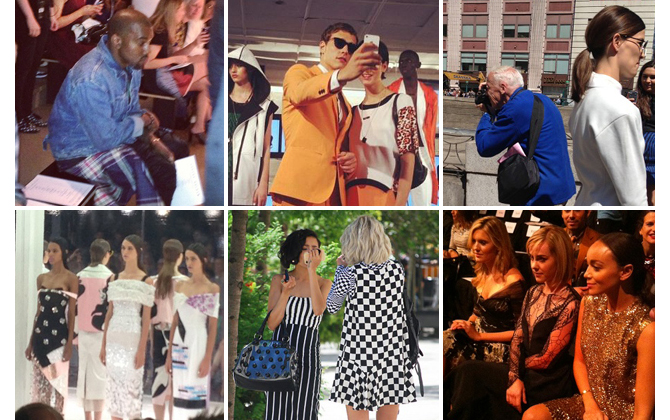 As we prepare for London Fashion week (surely it can’t be that time already) and the circus that takes place inside and outside the shows, I increasingly find myself questioning the way the industry works.

Oscar De La Renta recently called for a little more restraint and a lot less celebrity surrounding the catwalk shows and Suzy Menkes described the pace of high fashion  as “a whirligig that seems to be spinning out of control”, as designers are increasingly asked to produce as many as 10 collections each year.  It seems that high end collections have caught up with fast fashion and vice versa.

Is it just me or is a trend nearly over before it has even begun? And who’s to blame, people like us (bloggers and trend forecasters) who are all over something new as soon as it happens – high street retailers who have versions of the catwalk collections in store, sometimes even before the designers – or magazines for pushing  “must have key shapes’ and ‘hot items” on us, months before they hit the stores? I don’t know about you but I won’t be wearing a pink coat this season out of principle – probably because I’m sick of them before I even enter a shop.

Call me contrary or hypocritical as you know how much I love social media, but the open access approach to catwalk shows and the over use of Instagram and Twitter has taken all the mystery out of the catwalk shows. What was once a secret, closed shop for industry insiders, has become a free for all, of badly taken, burry images of “Cara doing the final walk at Burberry #LFW”, live streaming and Tweets – as well as every single image of the shows uploaded onto Style.com, half an hour after they have finished!

Sometimes I long for the days when we had no idea what the new season was going to look like until we saw the September issue of Vogue. Remember the thrill of opening the pages (I had a boss who banned anyone to touch it until she’d seen it!) and breathlessly flicking with excitement  as the new looks were revealed- and oh the joy of that first shopping trip of the season, when the new ranges hit the stores.

Now the whole world and her #wifey has seen all latest looks, or maybe even ordered them, as soon as they hit the catwalk.  And you know the worlds gone mad when M&S have a waiting list for their “must have” pink coat.

Is this the democratisation of fashion and a great way to utilise open source, or just another way of making more money as fast as possible? I’m not sure, but I do know if I were a designer who had put months and months of work into creating a unique collection, I would be doing a “Tom Ford” and inviting only a select few influential editors and buyers to my show – and banning all social media.

Maybe it’s because I work in fashion, that I feel overwhelmed with information and images and perhaps it’s taken the mystery out of the process? Don’t get me wrong, I love all the FROW gossip and even all the ridiculous dressing up for the cameras outside the shows, as it adds an element of excitement and theatre – after all fashion should be fun.  But when it comes to the clothes, just occasionally, I’d like an element of surprise – at least for a season.

An impossibly smug posting here for all Aga owners (sorry). I discovered today that the warming (or simmering in the two door version) oven on my Aga dries roses to perfection. Cut the rose heads off the stems before they…