Following on from Amanda’s insights into Women in Art, last week I went along to the Tate Modern to hear about role of the nude in art.

Part of the Unlock Art series of events,  Amanda’s girl crush Linda Bolton, talked us through nudes in the work of artists such as Rodin, Picasso, Salvador Dali and Georgie de Chirco.

After I had stopped staring at Linda’s fab outfit (Amanda wasn’t wrong) and marvelling at her vast knowledge of nineteenth and twentieth century art, I was fascinated to hear Linda bring the topic and artworks to life in a way that would inspire even the most reluctant gallery visitor.

Unlock Art’ is a series of short films created by the Tate in partnership with Le Méridien, offering an imaginative and witty introduction to the world of art. The eight short films feature topics ranging from the history of the nude to humour, Performance and Pop Art (there are more to come) and are being released on a monthly basis.

After our Tate visit we enjoyed delicious afternoon tea at the Le Méridien Piccadilly, hosted by Frances Borzello, author of The Naked Nude. Frances discussed how the concept of nudity surrounds us and how some nude artwork shocks and others are much more innocent. She thinks it’s interesting how we are ‘terribly comfortable’ looking at old fashioned art where the subject is ‘idealised’ and therefore, almost not real, but when we are confronted with a non-idealised nude, we aren’t sure how to react. 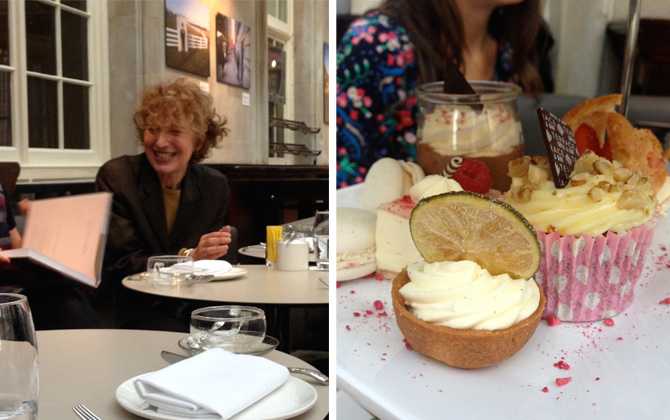 Frances Borzello and some of the delicious cakes from Le Meridien

While we are on the subject of women achieving success in the world, one of our favourite female perfumers, Angela Flanders, has got a…