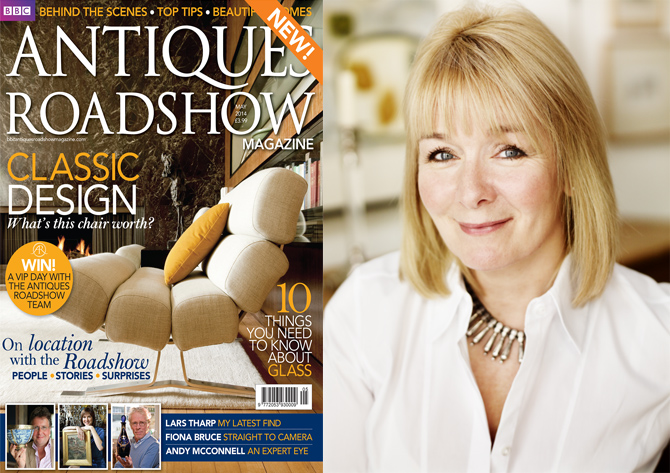 We know we have wonderful readers here at TWR, many of you do amazingly interesting jobs too. So when Anna Lambert, deputy editor of the new BBC Antiques Roadshow Magazine, wrote recently asking about the newsletter (yes we will be doing this again shortly, promise!) I couldn’t resist asking her if we could put a few questions to the editing team as we are MASSIVE Antiques Road Show fans here on the blog.

In fact in our house we think we ARE antique dealers as we confidently (and nearly always wrongly) guess every valuation and Middleagedad even does the red button competition, that’s how ARS nerdy we are. No Sunday evening is complete without us shouting ‘It’s Faberge!’ at the telly and waiting for the inevitable mega-bucks valuation that makes everyone tear up, before rooting around in the garage/attic/shed for something you’re SURE looks the same.

We press-ganged Sue Herdman, the editor of the new magazine, above, into kindly revealing a few behind the scenes truths about what goes on ….

So Sue, this new BBC Antiques Roadshow Magazine, what’s it all about then?

It’s a colourful, fun homage to a programme that has become something of a national treasure. Antiques Roadshow is one of the BBC’s longest running programmes and it marks its 36th anniversary this year. We all seem to know the theme tune, even if we don’t regularly tune in! Six million do tune in each Sunday though, and so the BBC decided that it was time the show had its own dedicated magazine, much as BBC Countryfile does. So we’ve been having a great time, creating a lively mix of features, some purely dedicated to the show (our exclusive behind the scenes on filming days will unearth all sorts of stories), and others to subjects affiliated with it. We’re as interested in what the show specialists do in their ‘day jobs’ away from the show, for instance, as we are in makers, past and present. Great design is something we’ll major on. Collecting will feature strongly; inspiring, often quirky, houses will appear each month; and always, there will be the key ingredients, those that make up each show: people, their stories and the items they treasure.

And why should we buy it? Isn’t once a week enough for most people?

Fair point! We think (and we would say this wouldn’t we?) it should be bought for its sheer joie de vivre! Each issue will be packed with so many ‘extras’. For instance, we’ve just finished interviewing the producer of the show, Michele Burgess, on the tricky topic of location choices. It’s a super-challenge getting the show literally, on the road, then camped and ready to host – and film – thousands of people and it makes a great story. Then there is the fact that there is never a rehearsal and the team can never second guess what is going to happen at a show. The magazine will reflect that – each edition offering something very different from the last. Already, just three days after our first issue hit the stands, I’ve had people tell me that they were fascinated to read about one lady’s personal account of having been filmed for the show. In her own words, she could tell the readers so much more about her story, what it was really like being on camera…and how it felt to receive a great valuation on her painting! We will also be hot on sneak early previews – our feature on the V&A’s wedding dress show is already getting fantastic feedback.

How did you end up editing it, are you an antiques expert too? Or just an enthusiast?

As with all journalists, I’m an observer, then a communicator. I’m definitely not an expert on antiques! I love them, though, and am interested in them, so I come in the ‘enthusiast’ category! I started my career writing for broadsheets – particularly about historic houses – before broadening my remit to arts, heritage and culture and moving into magazines, working on BBC Homes & Antiques at BBC Worldwide for some years, before taking on the Editorship of the mighty National Trust Magazine, which has some four million readers. So you could say I’ve been around the topic of antiques for years, but, as the team on the show constantly say, Antiques Roadshow isn’t just about antiques: it’s about those three things I mentioned before: people, stories and their treasures. Or maybe four things: everyone loves those ‘what’s it worth?’ moments…

Tell us something interesting about ARS that we might not already know….

Did you know that the BBC has a list of programmes that it will show at a time of national crisis – the sort to soothe a nation’s brow? And yes, BBC Antiques Roadshow is on it.

There’s a better balance of men and women experts on ARS than on many BBC shows, quite a few of the experts are over 35 too, is it a good place to be a grown up woman do you think?

Yes, I think it is. The show just isn’t bothered about gender or age (its youngest specialist is in his early 20s) – it’s about people’s passion for their subject and, frankly, what they know. It’s also about their people skills. Very often the specialists are dealing with poignant, tender stories: it helps to be a grown-up when having to think on your feet, be intuitive and sensitive about someone’s feelings – and come up with value that’s bang on.

And presumably age is a benefit here as the older you are the more you know, right?

Please tell us there’s diva-ish behaviour between all the presenters and everyone hates each-other….no only joking, but it does look like it’s a fun thing to be involved with and hardly anyone leaves, is it as fun as it looks?

Anyone would think you were a journalist!

It’s interesting; all the specialists are well-known experts in their fields, so they’re confident people. They also have to firmly ‘pitch’ their stories to the Series Editor, Simon Shaw, at each show, with a need to convince him as to why their find/item/story should be one that makes it to camera. When you think about it, some 2-3,000 people come to each show and only some 20 items will make it to the final cut. So, if you really believe that your ‘find’ should make it to screen, you’ve got to be able to make a pithy case for it! We’ve just done an interview with toy and miscellaneous specialist Bunny Campione. She’s been with the show for 27 years and in that time hasn’t just seen an incredible amount (the show reckons it has viewed some 9 million items since its first airing in the late 70s), but has loved the way that knowledge is shared amongst her fellow specialists. That’s something that has really come across to me – the generosity of spirit that exists on the Roadshow.

The very first  BBC Antiques Roadshow magazine should be at your local newsagent now, I’ve seen this issue and can tell you its a cracking read. Or you can subscribe via here

Oh this will cheer you up this Monday morning, good old Viv. We’re not suggesting you really dress like this, but check out the bold mixes of prints, the terrific colour and texture combinations and the shapes. They are bold,…