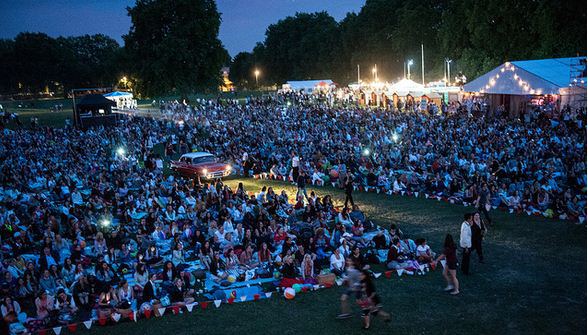 Secret Cinema – Back to the Future

Visiting the Secret Cinema screening of Back to the Future last week I was slightly alarmed to read that participants would not be able to take their mobile phones with them to the event. My initial reaction was how will we all mange to meet up without phones, how will I Tweet and Instagram, check whats happening on Facebook, read my emails, tell the time, Google facts about the film, etc etc throughout the evening?

Strangely (!) we did manage to all meet in the agreed place at the arranged time and made it into the event without too much trouble. In fact it was all so fabulously 20th century that I actually started to quite enjoy being phone free and by the end of the night had almost forgotten I had ever owned a phone at all.

We spent the evening chatting, eating, drinking and interacting with the various characters dotted around the re-creation of the film set and settled down on the grass to enjoy the film without any distractions. For once we were living in the moment and enjoying an evening out without sharing our every thought online.

Mobile phones have become both a blessing and a curse, making life easier in many ways, but intruding on it in others. The Kardashians were criticised this week for tweeting their way through a minutes silence for the murdered American teenager Michael Brown at the VMAs, which was disrespectful and illustrated how our phones have become common place in almost every situation.

It’s now completely acceptable to have ones phone on the table throughout dinner, film during a concert, text and check emails during a meeting and I have lost count of the number of times parents phones have gone off during a school performance.

Call me old fashioned but I am of the opinion that all of the above are downright rude and if someone starts to use their phone in the middle of a conversation, I stop talking until they have stopped texting/tweeting/instagramming, so that we can continue our conversation face to face.

My kids introduced me to the idea of a phone stack – which I love – where everyone stacks their phones on pub/restuarant table and the first one to touch it has to buy a round of drinks. What a genius idea, as obviously the person who weakens first is subjected to a great deal of ridicule as well as a hefty bill.

It seems more and more people are tuning into the idea of tuning out and turning off and clever entrepreneurs are offering digital detoxes and tech free weekends in order to gain some down time and mental clarity.

I loved the message Kate Bush posted on her website ahead of her UK concerts.

“We have purposefully chosen an intimate theatre setting rather than a large venue or stadium. It would mean a great deal to me if you would please refrain from taking photos or filming during the shows. I very much want to have contact with you as an audience, not with iPhones, iPads or cameras. I know it’s a lot to ask but it would allow us to all share in the experience together.”

Sharing real experiences and living in the moment are rapidly becoming things of the past as we increasingly live our lives through social media and maybe it’s time we embraced more phone free situations.

Checking the #KateBushlive Twitter feed last night, I was delighted to see virtually no-one had tweeted throughout the concert, leaving it up to us to imagine what was going on and making it all the more thrilling for those of us lucky enough to have tickets.

Perhaps not knowing everything as soon as it happens is the future.