Today’s guest post has a musical edge and comes from our reader Amanda in Scotland. One of the fabulous advantages of the guest post slot is seeing how wide spread and varied our readers interests are turning out to be. Now over to Amanda….

My name is Amanda and I live in bonny Inverness.  I am lucky enough to be a member of an all female ukulele group which we recently named StrumNess. There are about a dozen of us in the group and the majority of the members are very youthful retirees.  Alison, the lady who had the brilliant idea of setting up the group, simply asked people she knew who liked singing and socialising to come along.

So, please read on if you love to sing and have approximately £30 of cash that you can spare. Rather than frittering it away on a new miracle skin cream, lipstick or magic knickers I would like to encourage you to think instead about buying your very own ………ukulele! I bet you didn’t see that coming.

I can almost guarantee that the money you spend on a uke will give you 100 times the amount of pleasure that any of the afore mentioned treats would have given you.

My entry into the wonderful world of the ukulele began when it was suggested that I come along to the inaugural meeting of a women’s uke group here in the north of Scotland. So I did as I am encouraging you to do, visited my local music shop and treated myself to a ukulele.
As we were all complete beginners without a teacher we had a very haphazard way of learning, although it was such a fun environment nobody felt embarrassed or pressured that they weren’t keeping up.

I found that children’s uke books were set at the right level for me even if I was an adult. YouTube has a wealth of different videos of both keen amateur uke teachers as well as performances to inspire the adult beginner. And eventually we did start to get better. One of the great things about the uke is that after learning 3 chords you can play 100’s of songs – and there is no need to be able to read music. Unlike many instruments like the recorder or violin, the ukulele can sound quite pleasant even when played by a beginner. It is also an instrument that can be played individually or in a group like my own. If you live in a town/city it is very likely that there will already be a uke group that you can join. 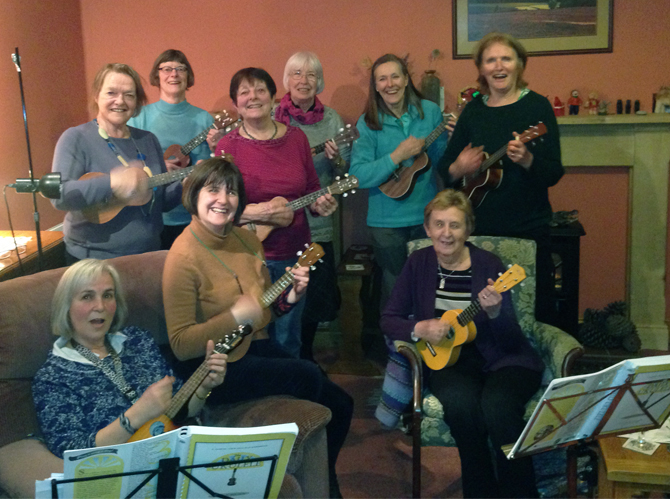 Although most people think of George Formby when the uke is mentioned, it has been played by all manner of musicians from George Harrison to Noah and the Whale. Whatever genre of music you like there will be music available for you to learn to play on the uke.

I personally like the music from the 1920’s such as Blue Moon, as it is so distinctive and different. But in contrast to this, when I see the cool contemporary musicians such as Ed Sheeran playing guitar I can now also have a go at playing his music on the uke and fantasise about (finally) becoming the lead singer in a band!! And as ukes are in with the hipster brigade it gives me a chance to be cool without having to grow a beard!

I know that I am very lucky in being in a group with a crowd of women who are great fun and don’t take themselves seriously, but even if you learn the uke by yourself it is such a cute little instrument it is hard not to feel better after playing it than before. If I was the Health Minister I would prescribe it on the NHS.

And even though it never crossed anybody’s mind when we first started playing, learning a new skill such as playing an instrument is terribly good for you and your brain and how often do we do that as we get older?
Finally, as we tentatively dip our toes into the performing world, we are deliberating over our costume options and whether we should be as bold as the ladies at the top of this post!

Tea Rooms have been popular in the uk for hundreds of years, with Thomas Twinning opening the first one on the Strand, in 1706….