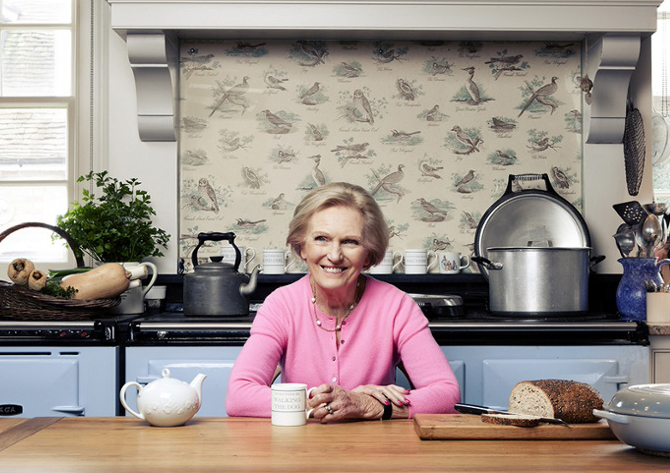 Image of Mary Berry by Alex Lake, via The Observer Food Monlthy

It’s hardly original I know putting Mary up as our weekend woman, but seeing her on the BBC’s Red Nose Day Bake Off, how witty and funny she was, and then reading this great interview with her in the Observer last weekend, I really think she might be the most inspiring older woman in the media at the moment.

Having been practically written off by her parents as a ‘useless girl’, she’s worked constantly and successfully, has survived the death of her son and has helped give credibility to baking, an area often dismissed as ‘domestic’ and frivolous. Also she sounds a real laugh.

I was inspired and moved by her comment in the Observer interview, when talking about the four friends she shared her first London flat with she said,  “of us four girls since, Pippa died of cancer, Gilly was killed in a plane crash (on the way to my chalet in Switzerland) and Penny – the brightest of us all, the head girl at Rodean – has Alzheimer’s. So haven’t I got a reason to go on doing what I do? Why wouldn’t I?”

Her mum lived to 105 so let’s hope Mary keeps inspiring us for a bit longer yet.

PS, the more observant of you will notice Mary has two Agas in her kitchen, TWO.

We are huge fans of food magazines here at TWR and love hand drawn illustrations, so the alternative food publication, Fire and Knives, ticks all our boxes, as it’s full of beautiful illustrations and interesting food features. Launched as a…