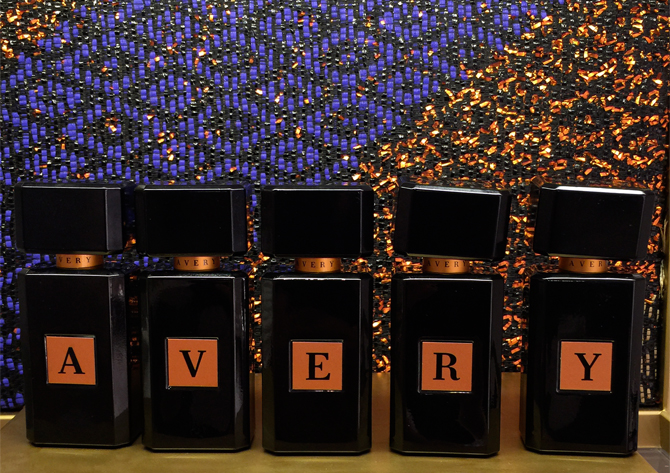 More lovely new fragrances to talk about today, it’s thrilling to see how many interesting, quality fragrances are being launched at the moment. The main stream fragrances brands, who have been rather lazy with their rather predictable block buster fragrance launches of late, are really being given a run for their money.

Avery is a brand that already has very charming stores selling assorted fragrance brands so it’s not really surprising that it has now launched its own small collection. Rather neatly it is a five scent collection and each one is called either  A (Adorable), V (Vigorous). E (Evocative), R (Royal) or Y (Young At Heart). I’ve been testing them all and there’s not a dud amongst them.

My favourites are A, which is a peppery blast of lemony freshness, and V because of it blast of patchouli, and I’m going trough a patchouli moment. But don’t take my word for it, I suggest you try them yourself. Avery has a smart curated counter of fragrances at the delightful new perfume salon in Fortnum & Mason, which I’ll be writing about next week. Or you can contact the stores ( In London, Milan, Florence, Modena or New Orleans) via the website for sample details.

So it’s a great week for older women on the radio, what with the wonderful Beryl Renwick and Betty Smith winning a Sony Gold…