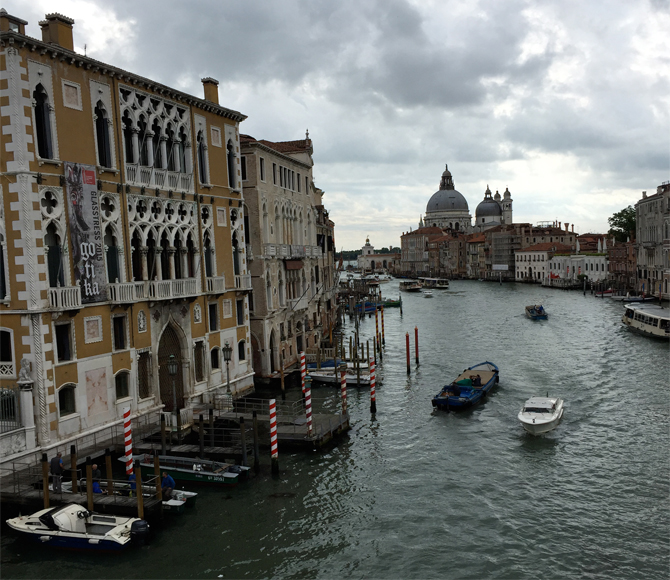 Last week I went to the Venice Art Biennale, I know, tough gig, traipsing around the beautiful Italian city, eating more pasta that is good for a girl and trying to figure out how a bottle of tequila can be classed as art (looking at you Danh Vo).

It was thrilling to see how many women artists were representing their countries this year. For anyone who hasn’t been, each country has a pavilion, a sort of giant gallery space, which is given over to (usually) one artist to create work. Needless to say it’s usually a male artist picked to represent their country, but this year around a third were women, including Joan Jonas for the USA, Pamela Rosenkranz for Switzerland and Camille Norment for Norway. 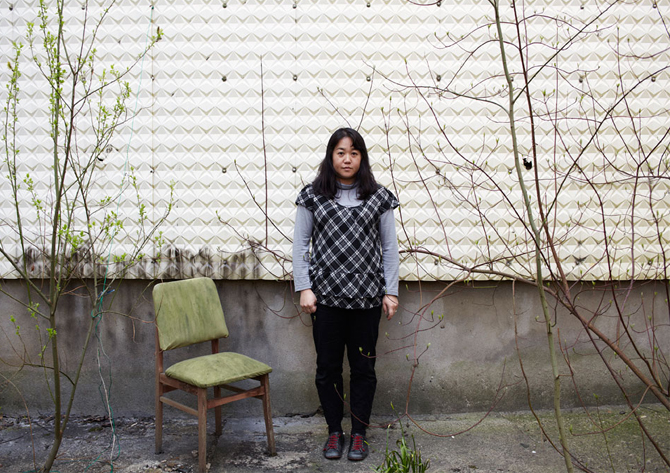 One of my favourite pavilion’s was Japan’s, featuring The Key In The Hand, an installation of red string, keys and old fishing boats by Chiharu Shiota, Chiharu works with materials that  are filled with memories and traces of everyday life, such as dresses, suitcases and shoes, around which she weaves beautiful meshes of yarn, linking and connecting the various elements. Her Biennale work was a complex web of red yarn from which old keys -representing memories- hung. The boats represented two hands catching a rain of ‘memories’, it was a textural cave of calm. 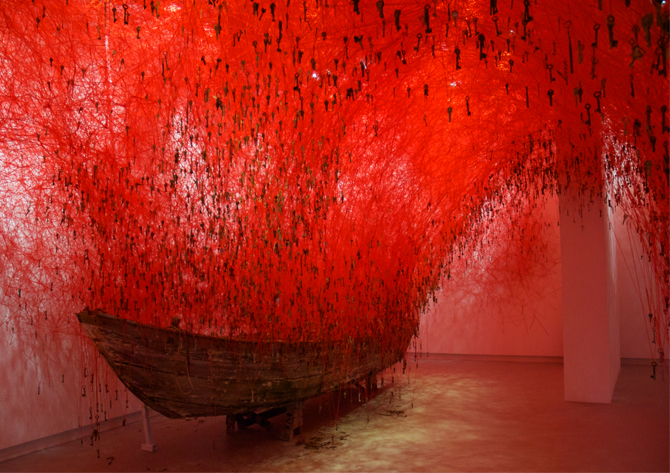 I couldn’t help think this might wok rather well with Christmas baubles…..obviously not so big, but perhaps above a doorway or table. Just a (decorative) thought. The UK was represented by Sarah Lucas, who used to be a YBA (Young British Artist) but is now properly grown up. 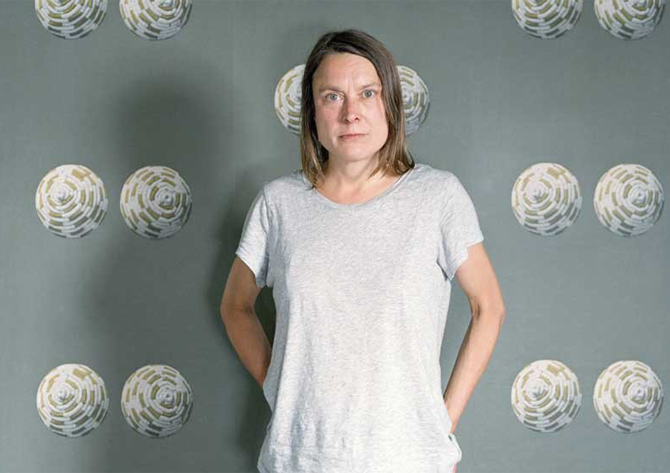 Sarah Lucas image via The Telegraph

Up until now I’ve not been a massive fan of Sarah’s lumpy tights and strange blob art, but I was surprised how much I liked I Scream Daddio, her pavilion installation. l loved the custard yellow colour she’s painted the walls, she was inspired by desserts -so yes, actual custard -and wanted to flood the pavilion with sunlight and put everyone in a good mood. It worked. 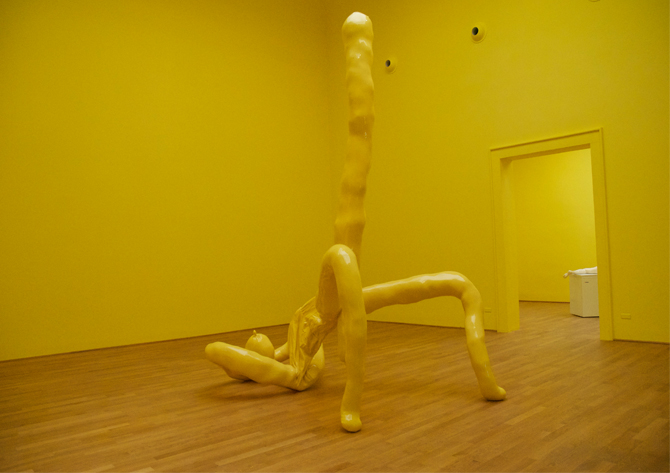 Her bronze sculptures were similarly strongly coloured, I’m not sure I’d want one in the house, but they have a great presence. There was much snuffled giggling at the cigarettes stuffed into assorted orifices, which Sarah explained were for ‘titillation value’. She told The Independant she regard this as a show for women, ‘I am a woman, I wanted to make it a strong feminine show’. My eye was drawn to the mid century furniture, it would look very nice in my office…. The Australians have a lovely new pavilion, the first new one in decades apparently, and they chose artist Fiona Hall to fill the new space with Wrong Way Time. This was a superb show which totally appealed to my craft-recycling-thrift-store-artisan mentality. Fiona brought together many disparate elements to signify her concern over  tensions in global politics, world finances and the environment, she called it madness, badness and sadness. The space -painted black -looked a bit like a modern day cabinet of curiosities, with a collection of collected objects transformed and uplifted by Fiona’s vision. I found it wonderfully inspiring. 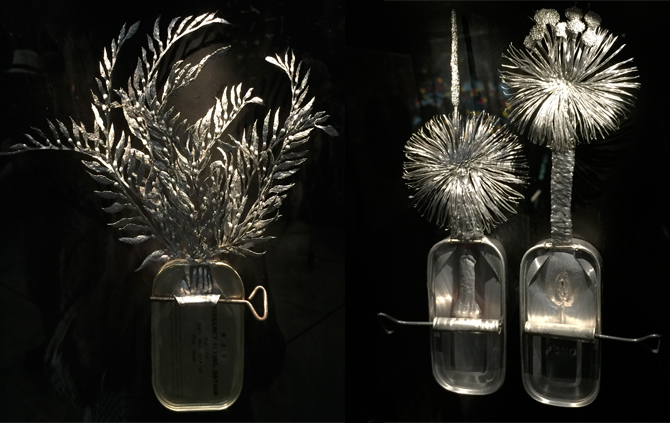 From the carved sardine cans to the collection of etched perfume and ink bottles, the work was very engaging. There was also birds nests made of shredded dollars, sun bleached wood curated into a large wall installation. Do seek her work out if it’s your sort of thing. 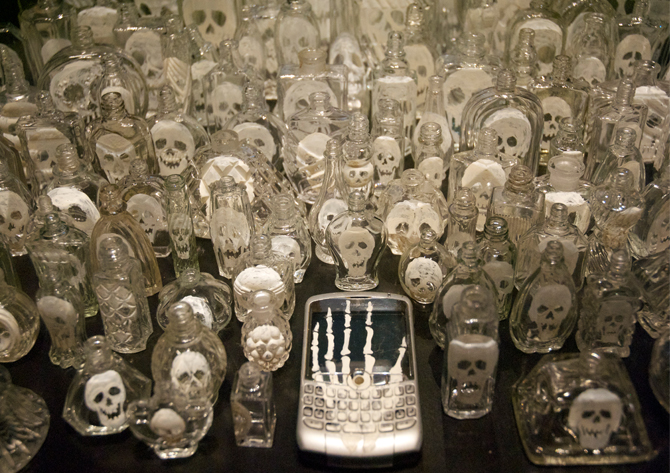 Now I’m slightly cheating heer by including Becoming Marni, Marni’s installation at the San Gregorio Abbey, because although it was organised by Carolina Castiglioni, Marni’s creative director of special projects, it feature the work of Brazilian artist Veio, who is ahem, a chap. TBH I found the art a bit ‘meh’, but the gallery assistants had the very best outfits…..all Marni, obviously. Check out the gold and black socks. Also the building was stunning, one of the joys of the Biennale is that some of the art is in buildings not normally open to the public and this is your very best chance of poking around the beautiful apartments and gorgeous cloisters, such as the one Marni had picked. Look at those windows! The tall thin poles are the art, BTW. 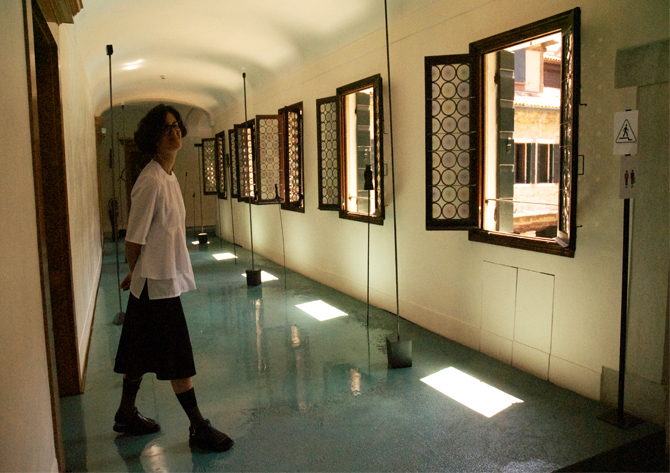 I approved of the Marni cafe too, which had tomato red walls and ‘garden’ tables featuring local wild flowers. You could do this at home, don’t Ikea have something like these little wooden tubs? 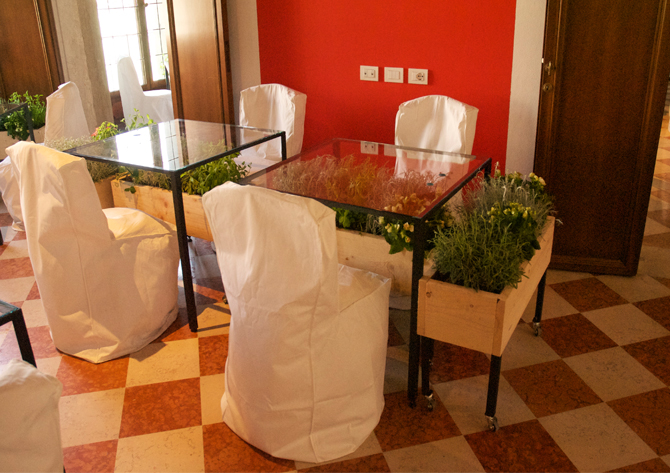 It’s actually quite hard to concentrate on the art when you are exposed to some of Venice’s best architecture and interior design. How about this for a front door onto the Grand Canal… 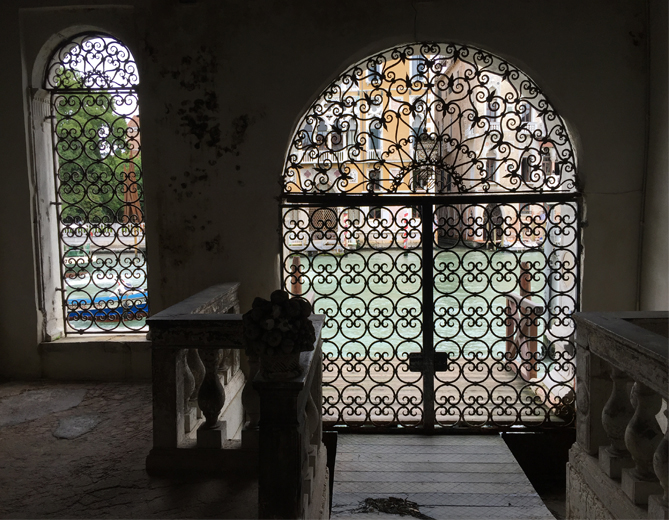 Or this for a window detail….You can see why George Clooney thought it would be a romantic place to get married.

The Venice Art Biennale is on until late November, and is a great way to see the city as it takes you to non touristy places that you often can’t get into under normal circumstances. More on the website here