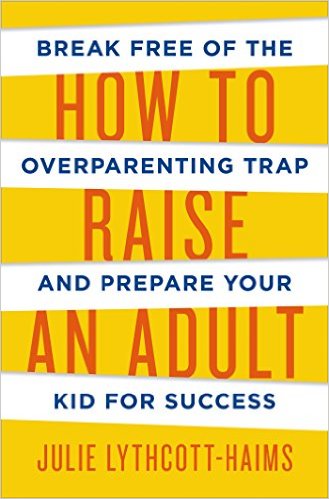 The new book taking the US by storm at the moment “How to Raise an Adult: Break Free of the Overparenting Trap and Prepare Your Kid for Success” by Julie Lythcott-Haims looks at how US (and UK) helicopter parenting is reaching fever pitch, with young adults no longer able to do things for themselves.

Across a decade as Stanford University’s Dean of Freshmen, Lythcott-Haims noticed a startling rise in parental involvement in students’ lives. Every year, more parents were exerting control over students’ academic work, extracurriculars, and career choices, often taking matters into their own hands rather than risk their child’s failure or disappointment.

When is the right time to step back and let you kids get on with things themselves, is a question my friends and I often ask ourselves and I have always been a great believer in letting children learn from their mistakes, but we all know in these over achieving times how hard that can be.

We seem to have moved so far away from our often almost neglectful “go outside and play and don’t show off” 70s childhoods to a society where its acceptable for parents to call university tutors and ask why their kids grades are bad (maybe because they have drunk the student bar dry every night, relived to be away from their interfering parents). The endless quest for the right schools, best grades, hours of homework/tutoring, wide variety of sports and hobbies, followed by the right university and ultimately successful career, must leave some kids begging for some free time and the chance to screw up once in a while.

When my kids were younger my parenting style veered between doing what I thought I should be doing (i.e. what all the other middle class parents are doing) and doing what I instinctively felt was right. But as I’ve got older (and hopefully wiser) I have learnt to trust my instinct more and since they left school I have tended towards more of a hands off approach. It isn’t always easy, especially when it comes to boys (sexist I know) – as the tendency to do things for them is often overwhelming (why is that?) – but no-one wants to be that mother who is responsible for producing a useless man who can do nothing for himself.

An article on the book in The Telegraph last week listed the signs of over parenting…….which I’m sure we have all been guilty of at some point.

Do you catch yourself saying ‘We’ when talking about your child’s achievements?

When you hear your child being questioned by another adult, such as a teacher, do you have to fight the urge to answer on your child’s behalf – and often fail?

Do you find yourself doing things for your children that they are old enough to do for themselves such as cutting up their food, doing their washing or changing their sheets? Do you avoid asking them because you assume they are too ‘busy’– or because you don’t want a row?

Have you queried you child’s marks at school or university – or repeatedly questioned referees’ decisions at school sport matches?

Do you behave like your child’s concierge even when they are teenagers, arranging their diaries and morning wake-up calls, booking flights for them and organising their financial affairs?

If you left your kitchen in a state and your children in charge when you went away for the weekend, would they leave it as it was, or make it worse?

Do you hold yourself to blame if your child does badly in a subject?

Has your child ever rung you to ask you to look something up for them, when with a little investigation, they could have found out where they needed to go for themselves?

Have you already considered which A-levels your child should take and which universities they should aim for, even before they reach secondary school?

Lythcott-Haims lists three kinds of over-parenting: overprotecting (putting buffers and safety rails in place), overdirecting (managing activities, studies and grades) and hand-holding (acting as a concierge to help fill in paperwork and talking to authority figures on their behalf).

She thinks the secret is to give kids time to think and work out their own problems, as ultimately doing everything for them makes them ill equipped to cope with problems.

Sounds like common sense to me – but after years and years of hovering over our kids making sure everything is ok for them, it can be very hard to do.

You can buy How to Raise an Adult here.

booksHow to Raise an Adult

In our house it tends to be the oldies who adopt new technology first. MAD and I like to think of ourselves as early…