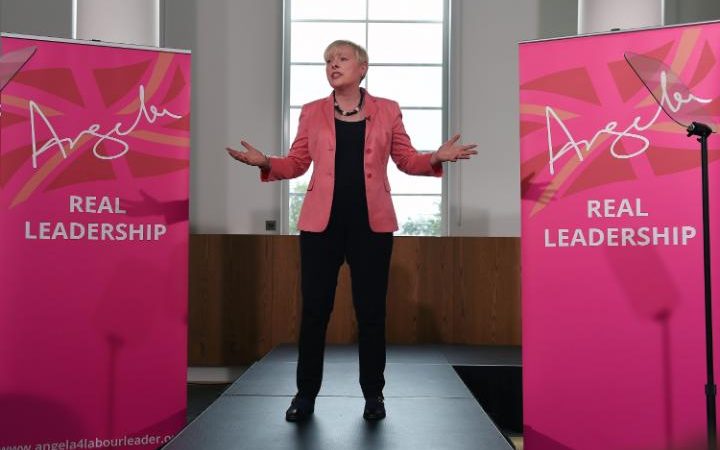 When this image of Angela Eagle’s launch event popped up on my social media feed, I was initially amused as the headline read “Is Angela Eagle launching a political career – or a perfume?” But the more I read and heard of the woman who hopes to oust Jeremy Corbyn, the angrier I got, for many reasons, most of which I won’t go into here.

I will however, comment on her complete lack of understanding of the modern world, as reflected in the branding she chose to launch her camapign. Describing herself as “a gay woman with strong, Northern, working class roots” one wonders what on earth she was thinking.

Of course she can wear what the Hell she likes, but conforming to gender stereotypical graphics and colours on her branding not only make her look dated and out of touch, they also make her look unauthentic. What woman who wants to be taken seriously in any job, would deliberately chose to be associated with a cliched image more suited to a page three girl launching a beauty range?

Of course you could argue that these things shouldn’t matter – but in this world of brand identity and corporate image – I’m afraid they really do and not just for women. Social media enables us to share ones thoughts within minutes of seeing something, therefore it’s more important that ever to be authentic.

In the trends world we have been talking about the need to be individual and visionary, as consumers are over saturated with information and stuff and need a reason to believe in a brand.

Creative Director of Gucci, Alessandro Michele summed it up perfectly at the recent Vogue festival. Maybe its the same with politics – perhaps we need politicians with genuine vision who also give #zeroshits and stand out in a sea of bland.

And here dear reader is where Angela Eagle will be up against it in her battle to be the next labour leader. Like him or not Jeremy Corbyn is 100% true to himself. His particular brand of quiet, socialist geography teacher is appealing for it’s complete lack of hype and story telling – or not – you decide?

We were wandering around the Brick Lane and Shoreditch area of London this week and spotted these rather wonderful graffiti animals everywhere. Eldestteenageson, who is at art school in the area, says they have been around for a while, but…