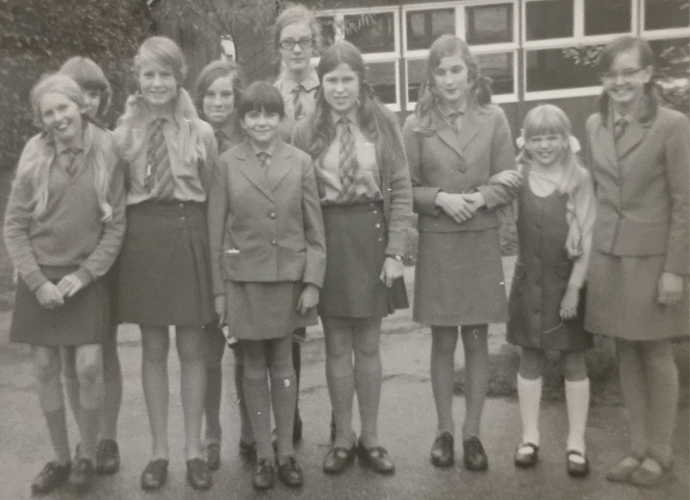 I spent my extra clocks-back hour this weekend luxuriously reading the papers and in the Sunday Times was an interesting article by Ysenda Maxtone Graham, on the effect boarding school can have on you, which got me thinking about my own experiences.

Regular readers will know I recently visited my old boarding school for the first time in 40 years and I’m thrilled to be back in contact with some of my old friends. Now we’re all grown up and can look back on our time at school with a more balanced view, I asked them what they considered the the good and bad effects going away to school had on them.

I know boarding schools have changed significantly since we went in the 1970s, but should you be considering sending your kids to one, you might be interested in how we all thought we were effected. In no significant order, here are our thoughts.

Good: we are excellent suitcase packers.

Due to having to pack my trunk at the end of each term and suitcase every time I went home for half term for five years, I am an ace packer. I frequently repack middleagedad’s bags when we are on some travel-jaunt and need to cram our local purchases into suitcase spaces that don’t seem to be there. I relish a packing challenge and respond to M.A.D’s wail of ‘There’s no room for the vintage record player we’ve just bought’ with a determined ‘Oh yes there is’ and dive into his half-hearted attempts at packing with gusto. I can roll, squish and flatten an unpromising bundle of holiday baggage into a neat and perfectly fitted pile of tidiness. I sometimes hope we get stopped at customs so the officials can marvel at my orderly attempts.

Quite a few kids at school had parents who lived abroad. Karen, who spent her school holidays jetting around the globe to reach her nomadic parents, said “Put me in an airport and I can fly anywhere and adapt happily to any country. But ask me to get a bus or train and I’m lost.” For years I felt similarly estranged from the telephone, since there was only one at school (One! Between 200 kids!) and receiving a phone call from my parents, who lived in Germany, was a Huge Thing and happened very rarely. Letters were sent planning the event and much organisation was needed to be in the right place at the right time to pick up the receiver. When we moved back to the UK it took me years to hear a phone ring without being panicked.

Good: we are confident and independent

Being left entirely on your own when you’ve only just hit double-digits in age, you learn to be self sufficient, fast. For most of us this has resulted in a life long confidence when it comes to meeting people and coping with new situations. This is definitely a good skill to learn, as Bev says “The ability to be independent and confident with strangers and to mix with all levels of people and not think I am better than anyone is a positive for me”.

Kate, who at twelve was mostly all wonky pigtails and untucked shirt, said “Learning self-reliance and responsibility was a positive, if I didn’t make my bed properly/tie my hair back as tidily as I could, there was trouble and there was no one else could do it for me so I had to learn! Jane said “I’m not afraid to be on my own” and that’s something that resonates with me, I grew to love being independent, sometimes to the exasperation of my parents who rather wanted me back under their care when I left school, but it was too late, I was my own keeper by then.

Being so far away from you parents meant they didn’t see how miserable you were, didn’t know about bullying and didn’t see how you were changing. When you did get home you often didn’t share the bad stuff for fear of ruining the precious time you were together, kids often want to keep their parents happy and so daily life could get really bad without anyone knowing. Some parents also didn’t care enough. A couple of my friends experienced a really rubbish time for some or all of their school life, which has resulted in them becoming radically different parents from their own. Although school was painful for them, it has resulted in them being more attentive and emotionally connected parents, so ending in a ‘win’ for their own children.

You get to know someone for themselves at boarding school. We often had no idea what our friends home-lives were like, where they lived or even what their parents looked like since those who lived abroad never came to the school. This meant liking someone entirely for who they were, which made for strong bonds and a sound grounding for future friend-making. We all acknowledge we find ourselves slow to trust others and let them get close, but once you have us as a proper friend, we’re hard to shake off. Kate said “In my case, being a boarder was something of an escape from battling parents and in many ways, my friends felt closer, safer and more accepting than my family.”

Bad: We can be emotionally tough.

Another thing you learn fast at the school gates – as the last hug of human warmth you’ll get until half term disappears swiftly – is to toughen up your inner emotional self. Sobbing constantly is no way to make friends, we became tough little scraps, building invisible walls to keep emotional thoughts out. Or in, it works both ways. This is a terrible way to build a person. I remember one girl was desperately home sick for ages, crying all the time, which we roundly condemned as ‘wimpy’. She would ask us how we could stand the miserableness of being away from home, the answer – which of course none of us actually said out loud – was ‘build a wall’. I hope she kept her human-ness, she was right and we were wrong.

Good: We learned a lot about clothes.

Our school uniform list would only allow us three ‘outfits’ of our own clothes for the entire term. I can’t get through the week on just three outfits now, let alone a term. We would sneak in extras, but we’d also borrow each others clothes (again totally not allowed). I remember very clearly being aware of how one person could look amazing and another look just OK in the same item of clothing. Those of us who were clothes obsessed learned our first lessons on how some people were born with style and how to own your look.

I’m sure everyone has a view on their school day and how it shaped them, but as I get older I become more aware of what an unusual education I had. Even now I don’t come across many people who went to boarding school and I almost cherish the oddness if it. It definitely shaped me into an independent, slightly isolated, free thinking teenager, but how would I have been different if I’d been at home over those years?

What about you? If you went to boarding school and you feel it shaped you, good or bad, I’d love to know.

After admiring the lovely wedding photos on our friend myvintagevows blog this summer, we rather liked the look of this more home spun, charm-rich wedding idea, not that either Jane or I are thinking of abandoning our MADs for new…