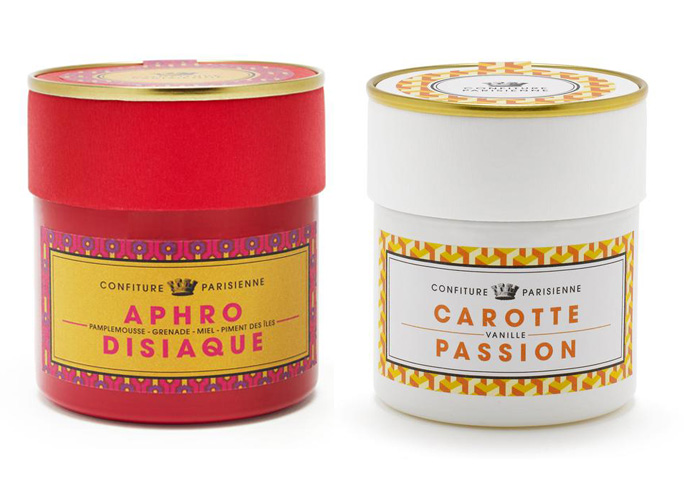 I read this week that marmalade – which I love- is in decline, mostly because it’s only being bought by older people. In a recent research project, it was discovered that six out of ten marmalade buyers are over 65. What the preserve needs is a make-over. Looks whats happened to jam. I am a big fan of The London Borough of Jam which makes beautiful and delicious pots, which it sells at Columbia Road Market. But for something a tad more chic, I think the stylish Confiture Parisienne range of preserves looks very interesting. Carotte Passion contains passion fruit, vanilla and carrot and Chataigne Poire is all about chestnuts, pears and tonka beans. Aphrodisiaque is grapefruit, pomegranate, honey and spices, definitely not your Women’s Institute flavours.

It’s the idea of a couple of cool French girls, who worked in the restaurant business and wanted to revolutionize the jam world with couture-level jams, featuring unusual ingredients and aspirational packaging. It’s now sold in the uber-cool French boutique Colette, so I guess they succeeded. I’m certainly buying some next time I’m in Paris, until then, it is supposed to be available at Harrods, although I don’t see it on their listings. Maybe in store?

So come on marmalade, lose the Paddington Bear image and get yourself a smart make over. There’s a business opportunity if I ever saw one. Part two of our US holiday has taken us upstate in New York to the Catskills. An often overlooked area associated with hippies and Hicksville, which over the past couple of years has been attracting artists and musicians escaping Manhattan…