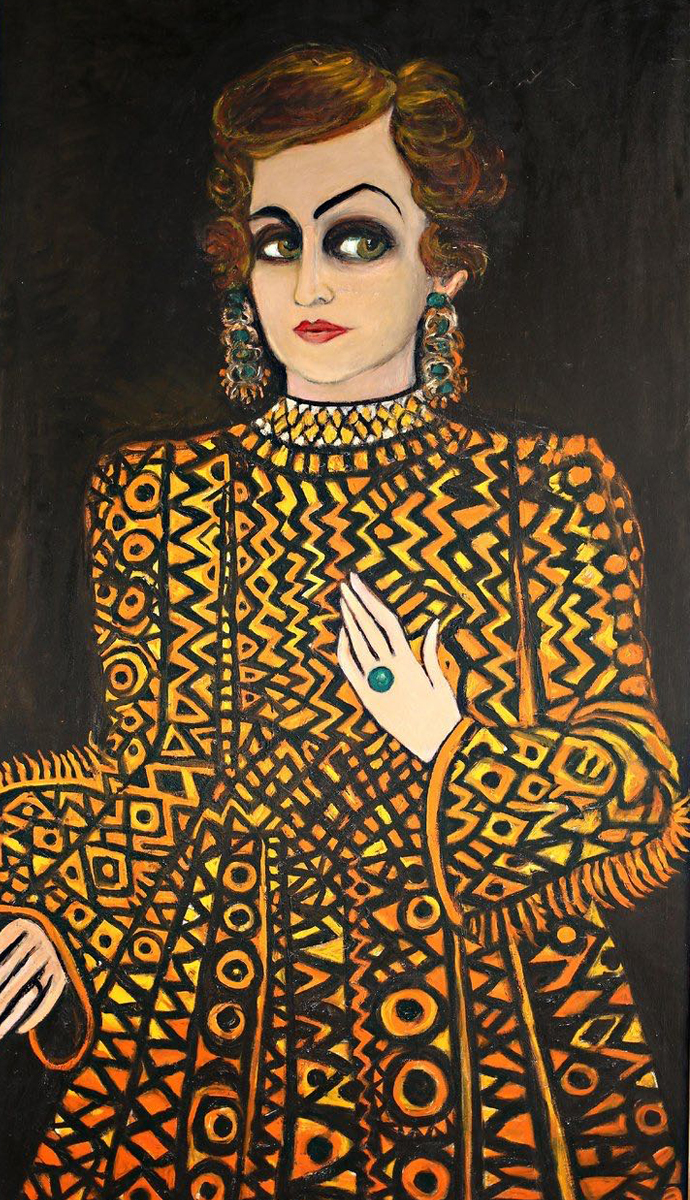 If you are looking for some cultural stimulation this summer, we can recommend the new Fahrelnissa Zeid exhibition at Tate Modern. She is an example of another ‘forgotten’ female talent we should all know about. Our roving cultural reporter Elena Bowes viewed the show with curator Kerryn Greenburg and discovered what an extraordinary artist she was.

Turkish-born artist Fahrelnissa Zeid (1901-1991) wrote to a striking looking business man in the States in the eighties asking if she could paint his portrait. She had never met this man with his shock of blonde hair and steely gaze. Working from a photograph he sent her, Zeid painted a life-size portrait of him in a tuxedo and a white shirt. Then she painted his name in Arabic across his chest. Donald Trump. 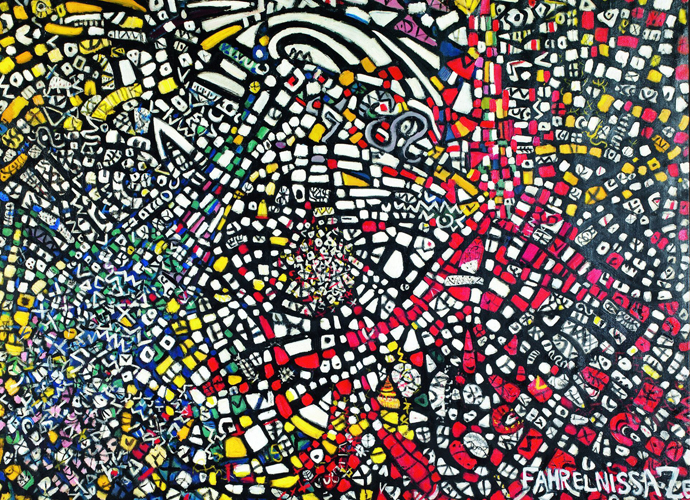 Zeid, lived an unconventional, fascinating life. She was a modern, strong-willed woman juggling the demands of being an ambassador’s wife, mother and artist. Her life story is so gripping that it threatens to undermine her accomplishments as an abstract artist who boldly reinvented herself several times throughout her career.

Zeid was a princess born into an aristocratic Ottoman family in the early 1900′s. She lived through the birth of modern Turkey under the leader Attaturk, a close friend. She was one of the first women to attend the Fine Arts Academy in Istanbul and one of the country’s first modern women painters. She married an Iraqi ambassador and lived in Berlin during the rise of Naziism. 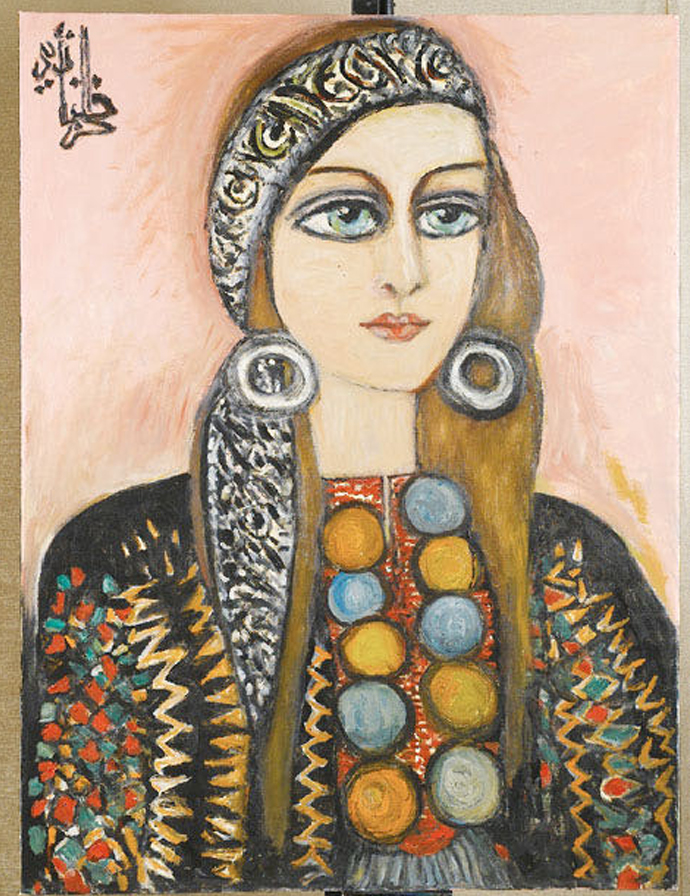 She was friends with Parisian luminaries of the day, such as writer Gertrude Stein and artists Serge Poliakoff and Sonia Delaunay. But Zeid’s life was not all easy. When she was 14 her beloved older brother was sent to prison for killing their father. Zeid had a difficult first marriage. Her first born died from scarlet fever. Her second husband’s family, with whom she was very close, were all assassinated in an Iraqi coup in 1958. Zeid suffered debilitating depressions throughout her life often escaping to Paris where she felt real freedom and stimulation as a painter.

“She was very privileged on the one side,” explains curator Kerryn Greenberg, “but she also had to withstand a huge amount of challenges, more than most people. The adversity toughened her and art became a way of processing those experiences.”

Her art, a mix of Islamic, Byzantine, Arab and Persian styles with aspects of post-war Europe, reflects her colourful, cultured life. Many of her works are full of geometric shapes, fusing east and west. 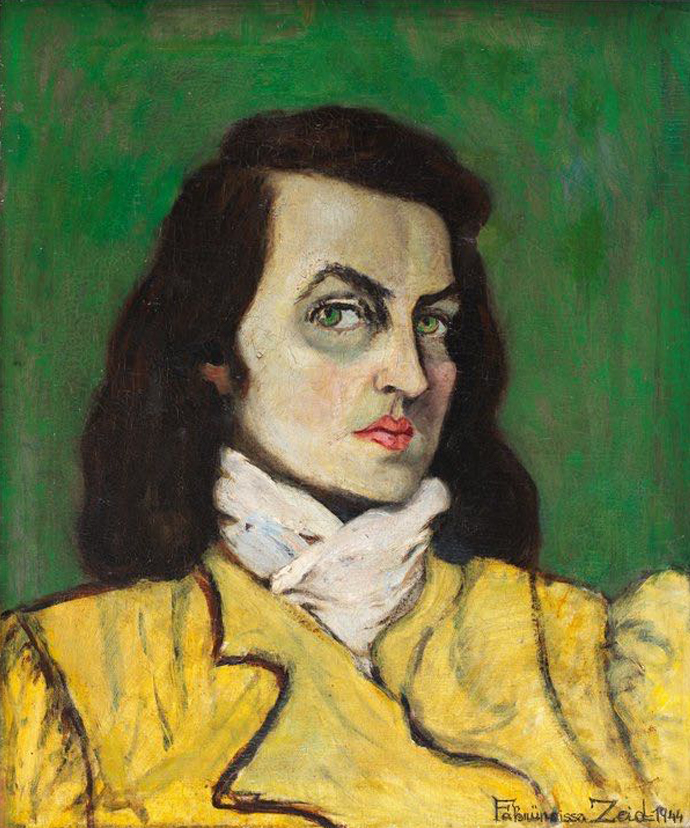 About Someone from the Past, (top image) Zeid wrote, “I am a descendant of four civilisations. In my self-portrait… the hand is Persian, the dress is Byzantine, the face is Cretan and the eyes Oriental. But I was not aware of this as I was painting.”

Zeid enjoyed success in the international art scene, exhibiting in London, Paris and New York, including at the Institute of Contemporary Art in 1954 . She was perhaps most famous for her monumental masterpiece My Hell, which measures 5-6 meters wide.

“When you consider what Rothko was doing, what Pollock was doing, and then what Fahrelnissa was doing on that scale, it’s pretty phenomenal. That she’d been forgotten is even more astonishing,” said Greenberg. Zeid’s large paintings stayed unequaled in scale by any women artist until Joan Mitchell’s triptychs in the 1960′s.

“Why was she forgotten?” I asked Greenberg. “Like many women artists, she dropped off the map,” said the curator. “Also she was from somewhere else, a foreign artist. She chose to move to Jordan in 1975, where there wasn’t a real art scene. So that was part of the forgetting too.”

Catch the exhibition until October 8th 2017. Elena has her own excellent blog here.

After New York and London Fashion Week’s interest in all thing 70s bohemia, we suggest to grab a copy of this new V&A publication….