Our roving reporter Elena Bowes has been in Milan, where she spent an afternoon with a designer you’ll likely never have heard of, yet whose influence is extensive; Mr Stephan Janson. Here he offers up a very grounded view on what it is to be a designer with longevity and what he’d like to do with France’s new First Lady.

If he were not a couturier Stephan Janson would like to be a monk. This is a designer who shuns the limelight, “Zorro-like” as he puts it. He has worked for an array of glittering names including Saint Laurent, Kenzo, Diane Von Furstenberg, Pucci and Loro Piana, yet always behind the scenes.

“Whenever I am behind a brand and people don’t know it’s me, I am so happy,” says the transplanted Frenchman who has always prioritised personal freedom and independence in his career choices. While Stephan’s consulting work pays the rent, he discreetly dresses much of Milanese society from his own fashion label which he set up nearly thirty years ago.

I interviewed the charmingly understated creative at his airy Milanese shop, sign-less and tucked away behind a leafy courtyard on a quiet street. I left later having bought a few ready to wear pieces and hoping that he never trades his atelier for a monastery. 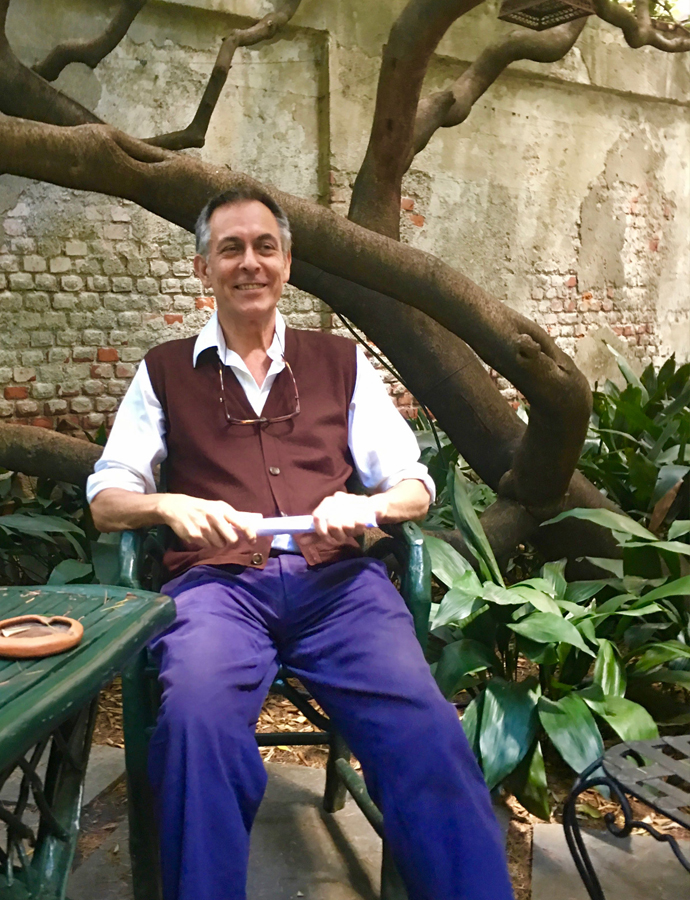 Besides a mirror, what three things do you think are indispensable in a women’s wardrobe?
“Winter – cotton cashmere turtleneck. Summer –  a roomy dress that does not cling to the body. In-between – a light-weight double-face angora coat.”

What items of clothing should women banish from their wardrobes?
“ All the shoes that hurt your feet and make you walk like a disarticulated robot with vanishing batteries. All the fur pieces – I always think an animal is better looking than any woman wearing his (fur). I always think of the animals, even minx which are just rats, I still think they look cuter than the women wearing them. And anything that reminds you of how great you looked ten years ago. A good designer will tell you exactly what to sell and what to avoid. You have to edit. Your wardrobe needs to respect you. We all have changing bodies. Sometimes you look great in something ten years ago and now you put it on and ….” 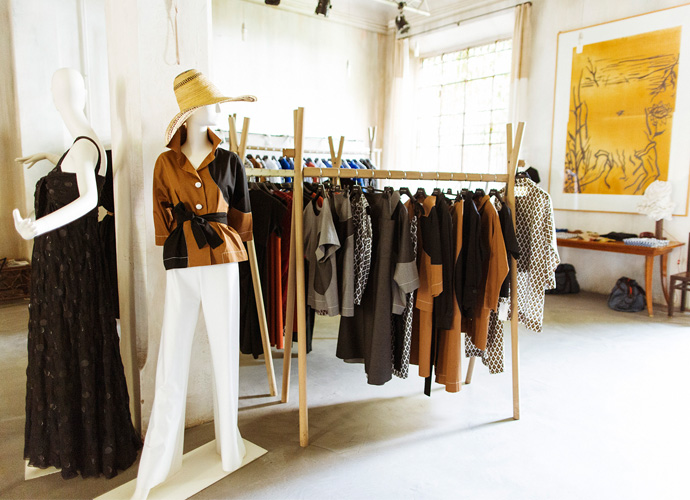 You worked for Yves Saint Laurent, Kenzo and Diane Von Furstenberg- What did you learn from each?
“From Saint Laurent, the discipline. I met him when I was so young, I was 14. I was lucky enough to be part of the group because I was a kid. It’s a job, it’s a profession, in all the fantasy that he had, in every collection, there was something that announced the next. This famous Russian collection, two collections before there were three dresses that meant nothing with the rest of the dresses. And then he worked on it for an entire year and gave that incredible Russian collection.”

“From Kenzo, I learned colour sense, the joy and the team spirit. Yes, he was the boss and everyone loved him. It was very much in tune with the times. It was the seventies. We sat on the floor at dinners. There was an errant vagabond feeling of a team. I was going to school during the day and working at night. I would sleep about two hours a day, but I loved it. On my 18th birthday, I was modelling in the show, dressing models, and responsible for the music. It was the first time a sound track for a show was reviewed by Women’s Wear Daily.”

And from Diane Von Furstenberg, I learned a lot. She’s such a woman. I was very young, and I had worked with Saint Laurent and Kenzo, they couldn’t care less (about what it is to be a woman). But she made me understand what it is to be a woman, which is almost impossible for a man. I think very much like a woman when it comes to making clothes. I always think that there is a husband or a lover or children or the best friend out there. That’s a very womanly thing to think about. A man would never think about those things. Diane taught me. Diane is the queen of the sexy dress.” 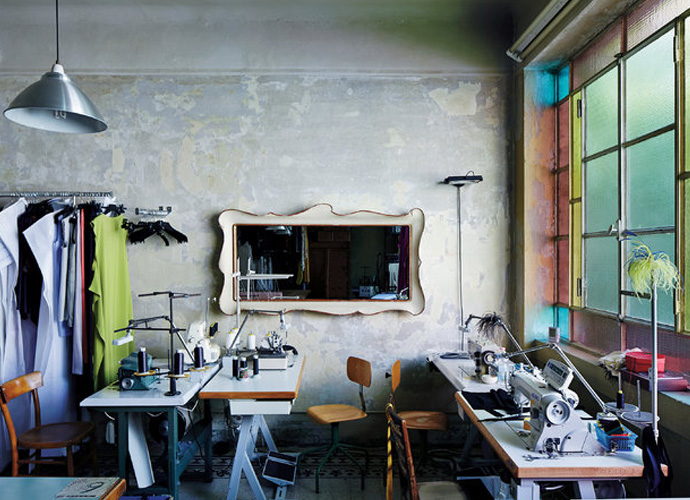 You have many loyal clients. Do you think of them when you are designing clothes?
“I always think of my clients when designing – they have been counting on me for so long to make their life easier. It’s not so much about pleasing them, its more about not deluding them. I have some woman clients that I’ve known for so long that they don’t even come here anymore. It’s easier to just send them things. They are part of my life. I am still here now because they were there for me twenty years ago. Trust.

My clients don’t need clothes, but they need the pleasure that comes with them. Search is more about giving pleasure, like fabrics caressing the body, lining on rough cotton slacks, that sort of thing. I love to have satin linings on clothes that don’t look like they have satin.

I always consider the wardrobe – if you buy something now, it better match with what you’re buying next year. Space! All these designers sell a lot of clothes to Japan and China when their closets are so small. They should visit Japanese houses and think, ‘where are they going to put all these clothes?”

The late British writer Doris Lessing asked Janson to style her for her Nobel Prize acceptance. He dressed her in red silk velvet with all silk satin lining. “I wanted her to feel protected” he said. 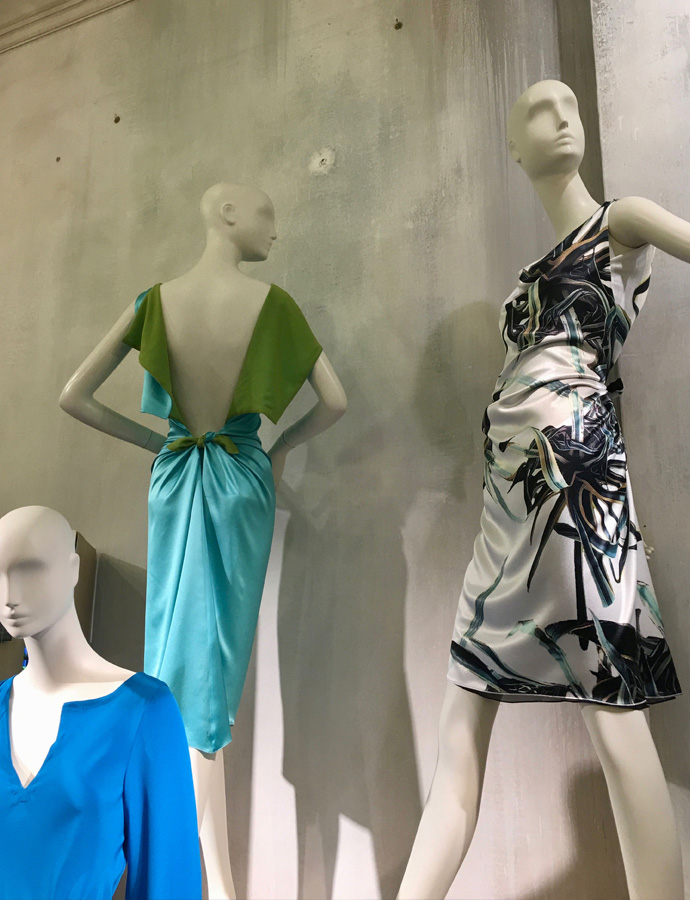 Who would you like to dress?
“The one I would really like to help now is Madame Brigitte Macron. I think she is a disaster, the way she dresses. The only good part, her husband seems to love her so much the way she is, but really she needs help. She’s cute, she has a great figure, I love her but please don’t dress like this. You don’t need all these metal elements on your outfits.

Before I dress (Madame Macron), I would like to talk to her. It’s the way people stand in a room, the way people look at you in the eyes, it should be more simple. It’s like when I do a bride, I don’t want to see anyone other than the bride… And I want to see (the groom’s) face at the alter when he sees (the bride) arriving. That will tell me if I’ve done a good job. Only one groom looked surprised when he saw her, but they were divorced a year later so it’s not my fault.” If you were not a couturier what would you like to be?
“A monk. Peace, no noise. I wish I was a believer because that’s a problem, but I can find something to believe in. When I go to a monastery I am almost envious which is not a feeling which belongs to me. These guys, I look at them and think, they have it so right. I think the world has gone so crazy.

For more reading on Stephan, visit the excellent The Selby, from where some of the above images are taken. For more from Elena Bowes, see her excellent culture and travel bog here.

I realise that this post could possibly be unique to the area of London that I live in. Not to sound superior in any…