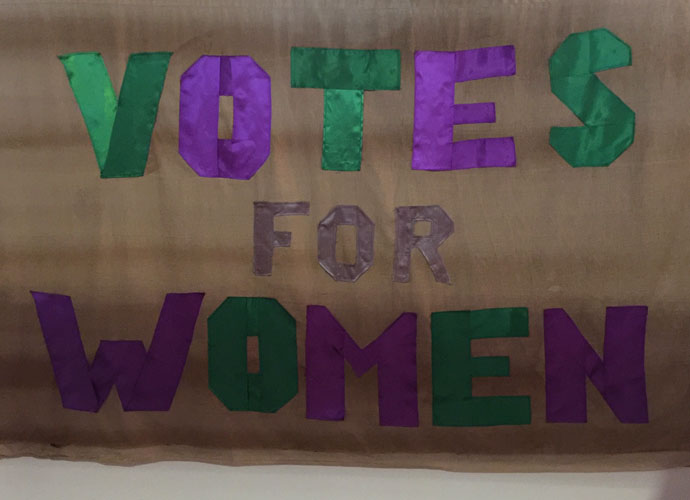 It feels like there was a sea-change for International Women’s Day this year, the noise coming from women was louder and stronger. I was slightly taken aback when my sons said they were ‘looking forward to IWD” and youngestson, currently interning for Giles Peterson’s World Wide FM told me how he was excited to hear the day long celebration of women’s music on the channel (you can still listen to it here) and how Colleen Murphy was doing a month long celebration of women’s favourite albums. I’m pretty sure last year’s IWD completely passed them by. 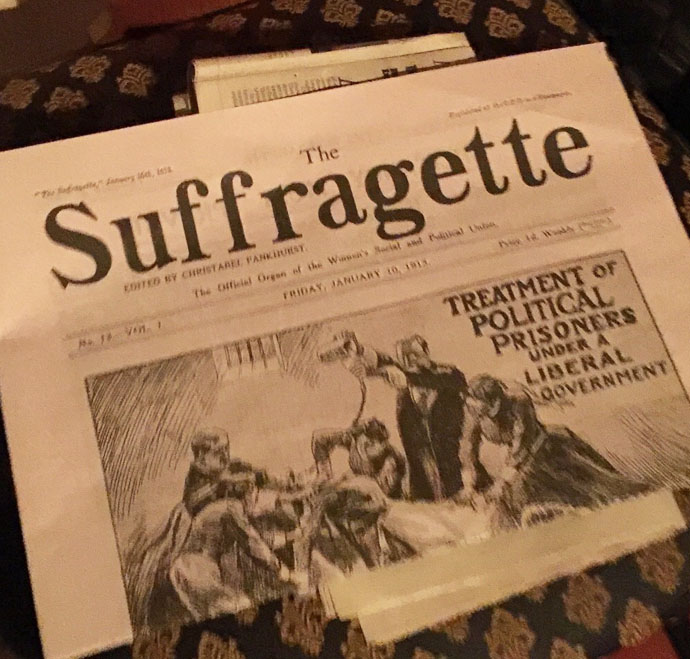 I celebrated the day by becoming an actual Suffragette, courtesy of The National Trust as part of its Women and Power project. For an afternoon, I swapped current London for the less female-friendly 1912 version, and became a fully fledged member of the Women’s Social and Political Union. 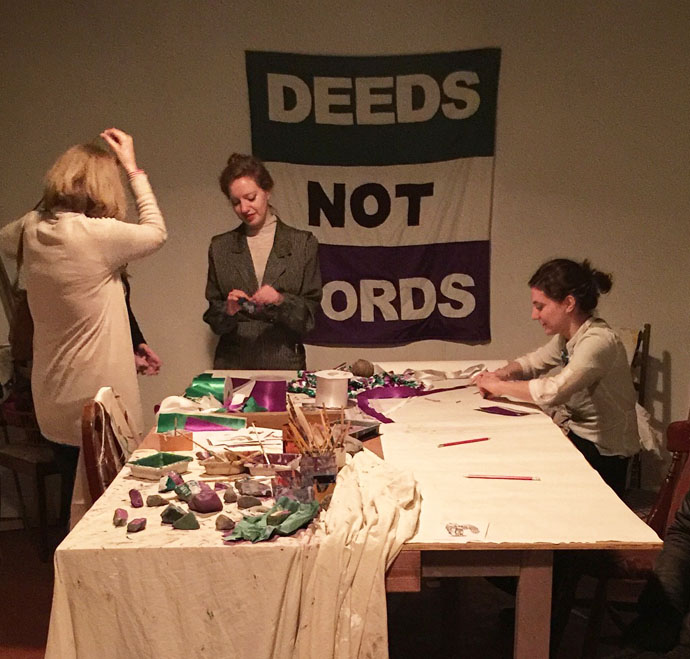 Hidden away below the London Pavilion, behind a secret green door, slightly scary women (all actors) dressed in period costume spoke with clipped British accents and signed us up for ‘missions’. 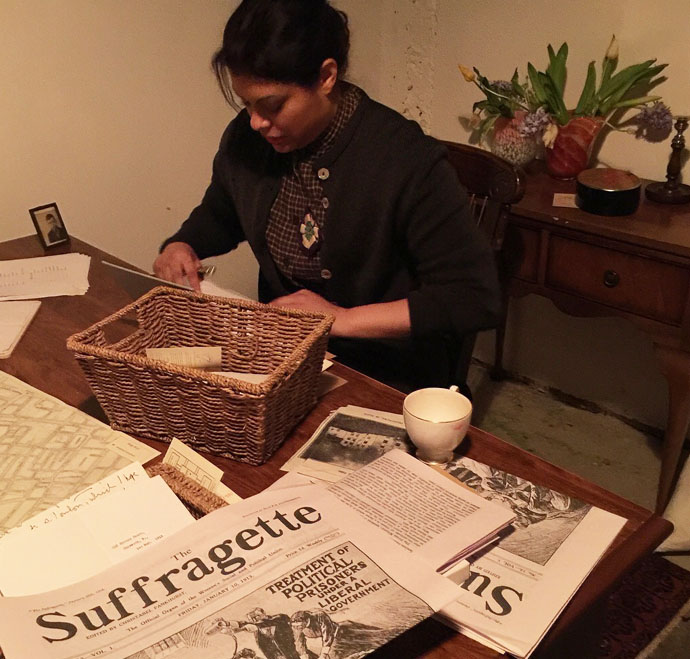 I painted rocks to throw through selected store windows with militant messages – Deeds Not Words! – in the purple green and white colours of the movement, A bit like today’s Instagram mantras only slightly more aggressive. 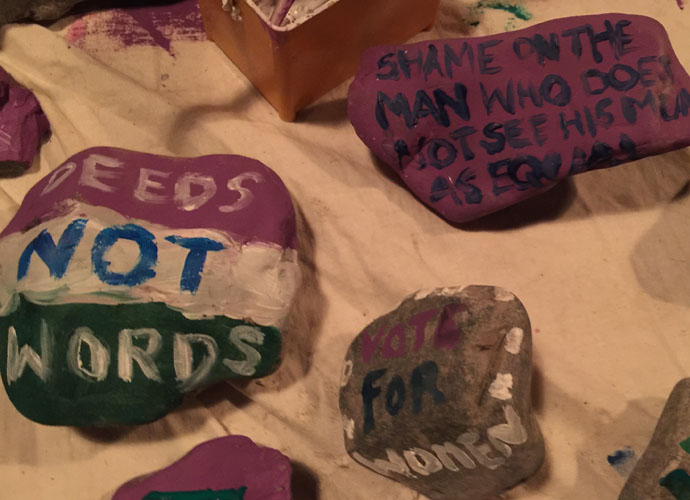 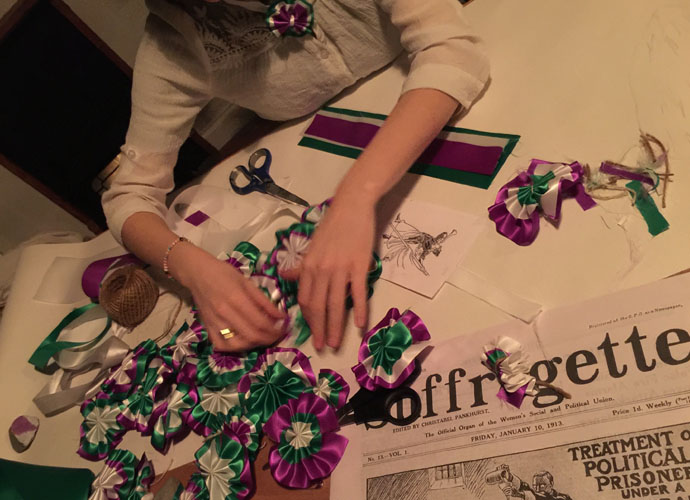 After we’d done the artsy-crafty bit of painting banners and making rosettes, we were sent out onto the actual streets of Piccadilly to cause as much mayhem as we possibly could armed with sticks of coloured chalk each, which was surprisingly nerve-wracking for for my group of cheery, well-behaved womenfolk. Tourists gave us strange looks and I was actually shouted at by a taxi driver as I wrote ‘Equal Pay For Equal Jobs’ on the pavement. And then we got arrested, imprisoned (in a fantastically decorated space within Piccadilly Circus Tube Station) and verbally abused by some terrifying policemen. Just like the real Suffragettes. Only difference being our policemen were actors and we were not subjected to the physical abuse and long term imprisonment our Suffragette sisters suffered. 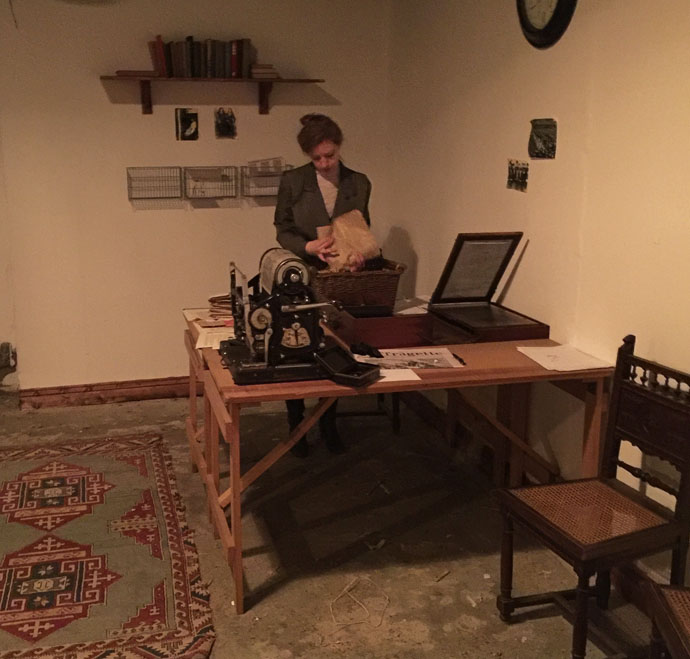 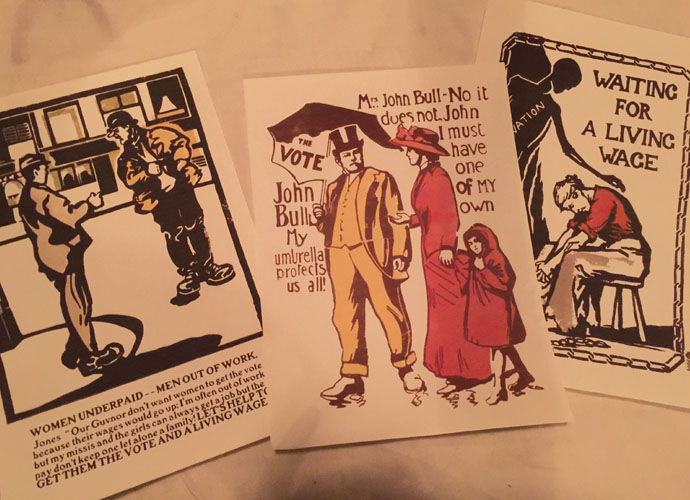 The entire immersive theatre experience – fantastically designed, directed and produced by Helen Scarlett O’Neill and Harry Ross  – was based on an actual testimony by Lillian Ball, a dressmaker from Tooting who took part in the window smashing campaign of 2012, and for which she served two months hard labour. When we finally returned to HQ our arrest was celebrated with whoops from other Suffragettes and we were treated to a nice cup of tea (obvs). It was a brilliant way to spend an afternoon, we learned so much and it shone a little light on how we might have performed  in similar circumstances, I was more than a little scared of the policemen, and they were actors! I’m not sure how I would have reacted in real life, I came away understanding so much more about the suffering and abuse these brave women went through, and how utterly frustrated and determined they must have been. 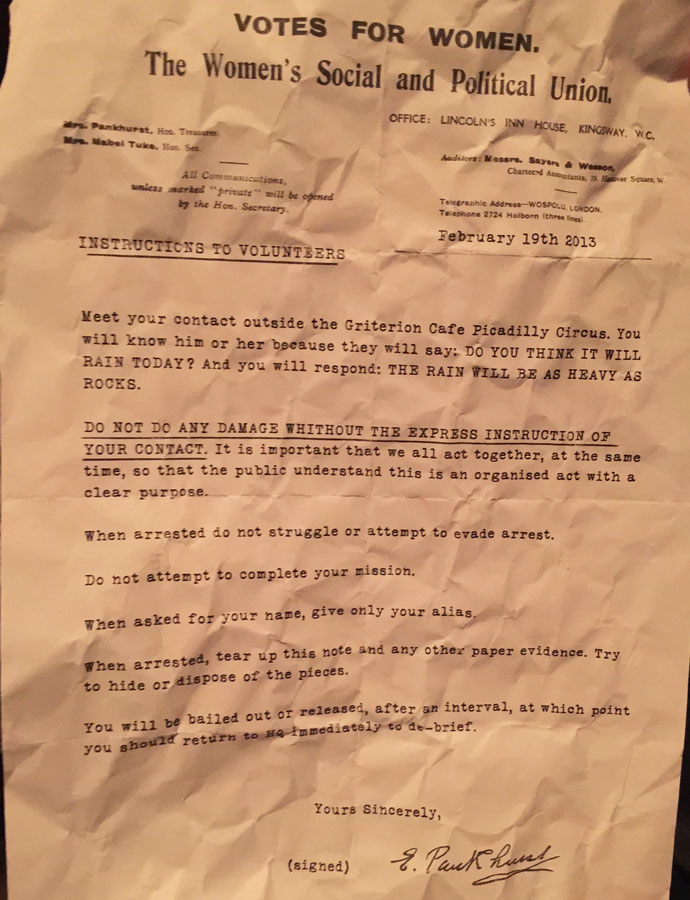 The Suffragette City experience is on until March 25th and I urge you to go. It’s a hoot and an education all wrapped up in a purple, green and white hand stitched banner. And you get tea and a rosette. A friend of mine organised the ticket for me from New York (impressive, right?) and it was the best present I’ve had for ages. More details here, but hurry as it’s selling out fast.

Did anyone else see the wonderful Culture Show Special with Hilary Mantel last week? Amazing. We have already read Wolf Hall, which we’re pleased…