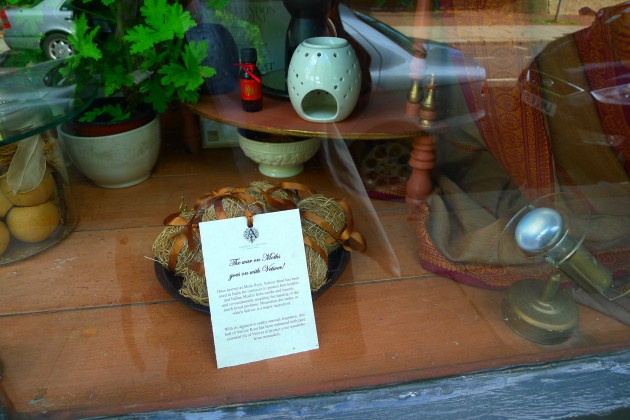 When we were at the wonderful Fashion Fantasia last week, we met Angela Flanders (who is Kate’s mum), purveyor of  gorgeous perfumes and….moth repellent. Now, you know how we feel about moths, so when we spotted the above notice in Angela’s Columbia Road store, we gave her a ring and asked her to give us her advice on how to keep them at bay.

Angela has been making perfume for over 25 years and developed her moth repellent after doing considerable research into how other countries handle the pests. Not surprisingly each country uses local herbs and spices, so Angela picked out what she thought were the most effective ideas and combined them into her French herb moth repellent selection (The French used cloves and is the basis of Angela’s mix, hence the name). “They must be quite good” said Angela of the concoctions,  “because people keep coming back for more and recommending them to friends, we’re always selling out. “

“You must take moths seriously as soon as you see one if you don’t want an infestation” she continued, “They are incredibly sensitive to smell, a Chinese emperor moth can smell a flower from four miles away so they can easily sniff out a bit of collar grease or soiled clothes. Never put clothes away dirty and I think clothes should be brushed down with a good clothes brush before they are put away, particularly the inside of pockets, that’s a lovely place for a moth to hide”.

As well as her French moth repellent herbs, Angela has a limited edition of vetiver balls (above, behind the notice), which are used in India to keep moths at bay. Angela infuses this tangle of natural vetiver roots with concentrated vetiver oils, which last for a good while in the wardrobe as a deterrent and are good for men as the vetiver smell is quite a masculine fragrance. Email or phone the store directly if you are interested in these as they are not available on line.

“Remember that all these things are just deterrents” said Angela’ You have to be vigilant and practise good wardrobe maintainence too, don’t store things too close together in cupboards, move things around regularly and learn to be a killer-diller”*. Wise words.

*Killer-diller- technical speak amongst the moth police for moth squishing

Angela’s moth repellent bags and sprays are for sale on her website or at the Columbia Road store, which is open on Sundays, or by appointment. Moth repellent stocks were running low when I spoke to Angela, but will be in good supply from mid October. Perfumes are also available at the pop up store in Precious London