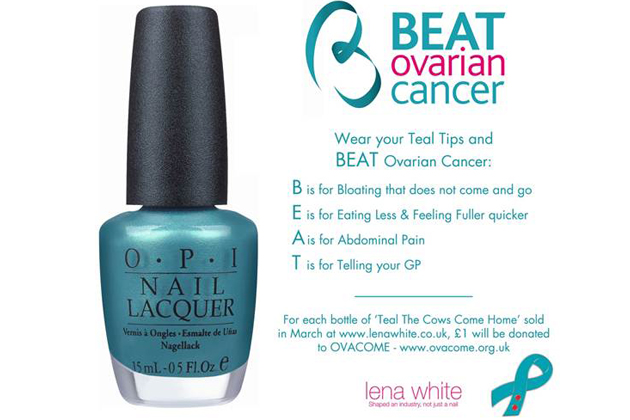 March is ovarian cancer awareness month and Nail company OPI have collaborated with Ovacome, a charity whose aim is to raise awareness about the symptoms of ovarian cancer, to encourage earlier diagnosis and a better chance of recovery

Historically, ovarian cancer has been known as ‘the silent killer,’ and even today, the symptoms are not well known. The prognosis is not great if women don’t receive treatment until they are in the later stages of the disease.  Early detection makes a big difference. The overall five-year survival rate for women with ovarian cancer is only 44%, but if the cancer is caught before it spreads, this jumps to 92%, so awareness really could save lives.

Ovacome’s recognised colour is teal, so OPI are donating £1 from every bottle of Teal The Cows Come Home, for the whole of March. A good cause and a lovely colour – what’s not to love?

My lovely friend Ashlyn Gibson is a force to be reckoned with when it comes to getting things done and bringing interesting people together. She…