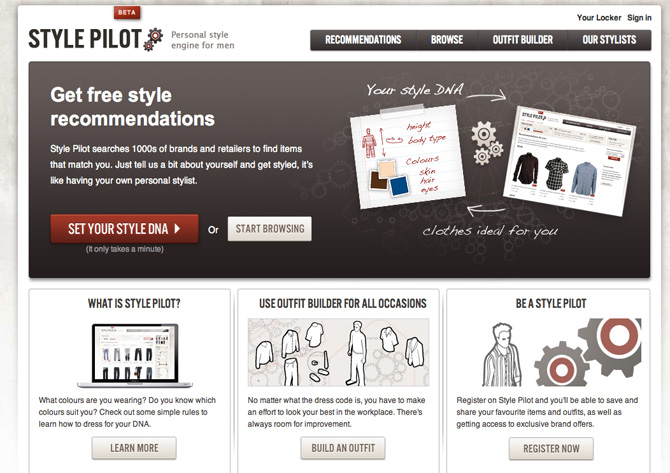 Middleagedad recently did a post on his blog where he looked at the efficiencies of his online shopping, claiming that fairly soon he will NEVER have to visit a store again. Men often don’t like shopping for clothes, well straight ones don’t, but they do increasingly want to look good. Blogs such as A Continuous Lean and Mr Mort are influencing the ‘everyman’ because they show ordinary guys looking good in styles that wont scare the horses (often with a manly touch of authentic heritage thrown in) instead of flouncy fashion boys in scary fashion trends.

But although inspiration is getting easier to find, when it comes to shopping it’s trickier locating good stuff so easily. Mr Porter is exceedingly stylish but a wee bit scary for ordinary blokes, So Stylepilot, the new launch by ex Microsoft product director Jim Cruikshank seems a good idea. Billed as a style engine for men, it takes a few basic details such as body shape and colouring and asks a few questions on budget and usage, throws in a few simple ‘how to wear’ style tips and searches the web for potential ‘best buys’. It’s simple, has good brands on board and might be the answer for blokes who hate to visit stores.

Having my own supply of male testers to hand, I asked middleteenson to trial the site to look for a suit for his upcoming internship. He twiddled with the sidebar controls on styling and formality and the site found examples from all over, including Ted Baker, Topman and Burton. We didn’t buy, as you’ve got to try a suit on really, but it showed that it had potential and teenson said he’s definitely use it again. The outfit builder would be useful for anyone totally lost in putting together a look (Stylepilot’s own research confirmed that one fifth of the 1000 men it interviewed reckoned their style could be improved….we say ‘ just a fifth?’) but I don’t know why they haven’t used more pictures.

Middleagedad thinks it needs to look a LOT cooler (there is a new design coming) and perhaps be a lot more interesting and I’d agree it’s a touch dull. But not everyone is as digitally advanced at shopping at MAD, so it might work for some. Try it on your favourite shop-loathing male.

Maxi dresses are still on trend, and this lovely one from Lucza is a very grown up one which is perfect for holidays and…