So it’s a great week for older women on the radio, what with the wonderful Beryl Renwick and Betty Smith winning a Sony Gold for their best entertainment programme on Radio Humberside  (Saturday evenings, 6.00pm til 7.00pm if you want to catch the next one). But I’m a teeny bit annoyed by reporting that implies ‘they’re old and they can still talk!’ as if it’s a modern miracle, we indulge plenty of older men in radio and TV so why not women? This may seem ungrateful but radio generally has a poor record with women, we think female BBC TV presenters get a raw deal, well radio seems a lot worse.

According to research commissioned by the website Sound Women, women make up just 34% of radio senior managers and only 17% at board level, this is much worse than in television, where 29% of board members are women.  Also less than 1% of radio editors are women, 1%! Women are BRILLIANT editors. Only 10% of studio operators are women and women in radio with kids at home (working mums to you and me) make up just 16%.

These are dire statistics, Miranda Sawyer, reporting for Sound Women on the Sony Awards line up acknowledged that things were a little less male-centric this year, with Victoria Derbyshire winning the prestigious Best Speech Broadcaster and Fearne Cotton winning Best Music Programme, but there were entire sections where no women were nominated. And I can’t have been the only person who groaned inwardly at those two tossers (can I say that?) Andy Grey and Richard Keys winning Best Sports Programme, aren’t they still on remand for that misogynistic offside rule comment?

Radio 4 is a top favourite of TWR, but it’s stuffed with middleage men, it’s a bonanza of blokes, (Sound Women’s research found that 9% of women in radio are 50+, compared to 19% of men). Women are great on radio, we are fluent speakers and never short of something to say, let’s face it. Women’s Hour does ‘hard hitting’ as well as it does ‘food and fashion’ due to Jenny Murray’s considered stewardship and Jane Garvey’s a demon at dismissing fluffy answers frankly, I’d hate to be on the wrong side of her questions.

My favourite radio presenters currently are Dawn French and Jennifer Saunders, who do an occasional joyous Bank Holiday skit on Radio 2 (the last one was over New Year, check out the playlist here) and pick both guests and music that are grown up as well  as funny. But it’s very infrequent and we need more.

Sound Women is a community for women who are already in radio. The above video, made by high profile presenters such as Radio 1’s Annie Mac and Classic FM’s Margherita Taylor positively encourages you to down tools and head to the BBC recruitment depart. This April the BBC has partnered with Sound Women to offer new female radio recruits a mentoring programme via its BBC Academy.

So well done to Betty and Beryl, they have raised the profile not just of women, but older women on the radio and highlighted a gender gap that Sound Women are trying to do something about. So if you fancy a career change (Betty and Beryl only started broadcasting six years ago) or have daughters who might like to consider it, head over to Sound Women. Meanwhile, here’s a link to the last Betty and Beryl programme via listen again, they are a hoot.

The Women’s Room Breakfast Show anyone? 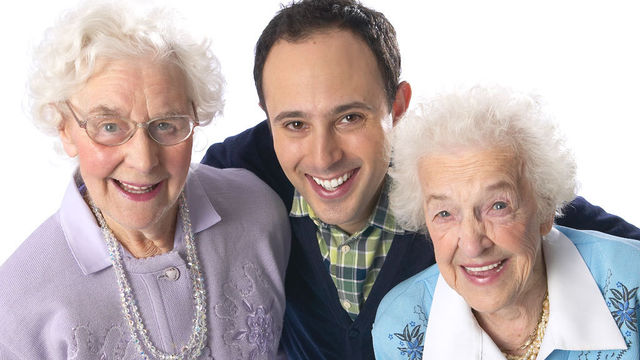 Betty and Beryl from Radio Humberside with some bloke (David Reeve)

Teenage sons and I hung our Christmas decorations yesterday. Decorations are not surprisingly, my domain and I usually run the show, dictating colour schemes and general style. However, this year I felt a wee bit sidelined due to middle and…