This week social networking came into its own to challenge an issue which has been concerning designers for years. Young designer and illustrator Kate Moross took to Twitter to post a photograph of a Topman sweater which looked suspiciously similar to one she had designed and sold via her website in 2011. She asked her followers to re tweet “Side by side comparison of @TopmanUK print theft of my Tribal pattern – please support and retweet.”

This resulted in over 1500 re tweets and a reply from Top Man. “Topman takes very seriously the protection of its own intellectual property rights and accordingly respects the rights of others. We take great care to investigate any allegations of infringement rigorously.” The garment has now been taken off the Top Man website and listed as out of stock.

Well done Kate for challenging them and well done Top Man for responding and removing the offending garment. But honestly, I could walk into virtually any High street shop right now and pick out numerous garments that have been influnced (copied) from a struggling young designer, high end luxury brand or even a rival High Street retailer. The copying culture is rife and has been for years and is one of retails biggest (not so secret) secrets.

As a High Street designer for many years, I lost count of the number of times I was asked to “do a version” of a garment bought from another brand. Shopping trips around the world were spent in the pursuit of the next big thing and involved trawling the shops for “samples” – ie new styles to copy.

It takes four years to train as a designer and believe me, there is nothing more soul destroying than being asked to create a version of someone else’s (often bad) work!

There is also the obsession with the catwalks and whole teams of High Street designers are put to work printing off image after image of the runway collections as soon as they happen. These will be analysed and pulled apart, in order to make sure “versions” of the key shapes get onto the shop floor asap. Browse the latest ranges of many high streets chains and you are sure to find garments “inspired” by Marc Jacobs, Louis Vutiton and Prada, some of them not that different from the original. 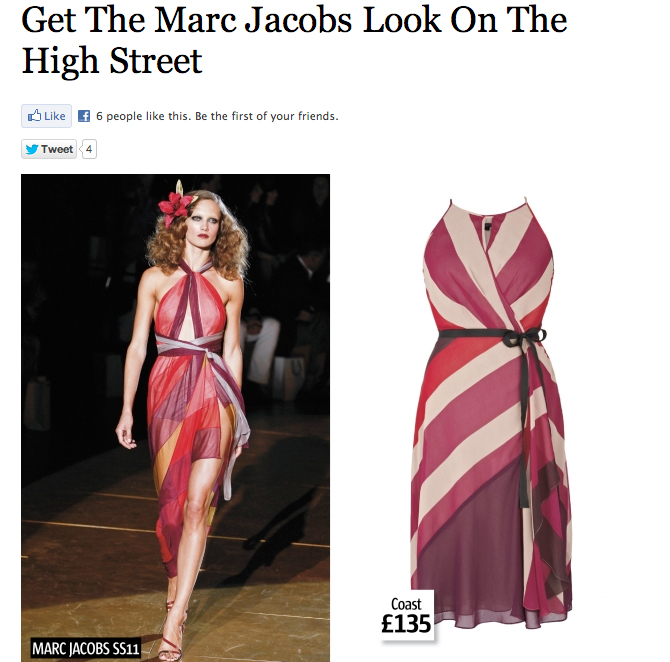 This wasn’t always the way ofcourse, as there was a time when it simply wasnt possible for us all to see what was happening on the catwalks and while I celebrate the democratisating effect of the internet and opening up the digital conversation, I do wonder if an open source attitude has  contributed to the lack of creative thinking and originality in our High Streets. It is so much easier to copy rather than create something original and in some buyers minds, safer to copy a style that someone else has tried first.

The media also buys into this mentality by encouraging (mostly young) readers to ‘Get the Look’, featuring designer items and celebrity outfits alongside cheaper versions of the same thing. Whatever happened to magazines inspiring us and encouraging us to be individual? 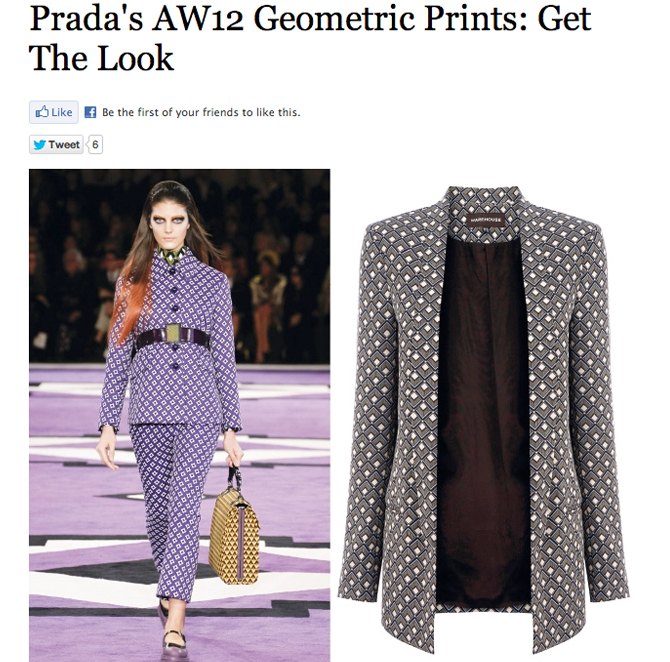 Not all brands do this of course, there are those who employ designers to do the job they were trained for and created unique collections that stand out from the crowd. They know who they are, have their own identity and are confident enough to design ranges based on what their customers want rather than whats on trend. But unfortunately there just aren’t enough of these visionary design led companies in the UK.

While the internet is in partly to blame for the increase in copying culture, it also gives us the abliity to stand up and shout about how wrong it is. Perhaps as consumers it’s time to take a stand against this lazy retailing and lack of foresight, after all who wants to look like a cheap version of someone else?