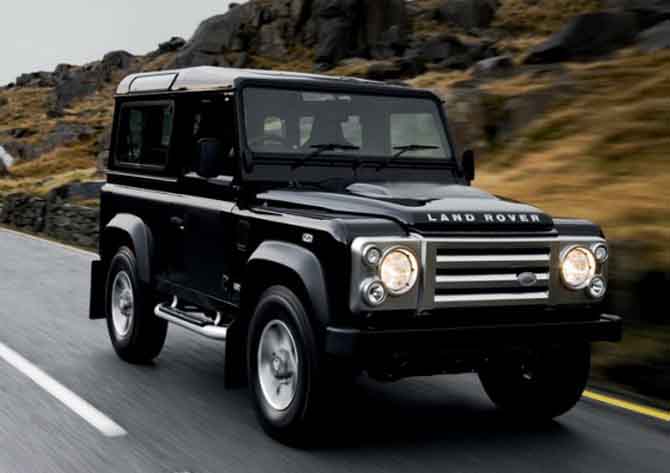 It used to be a Porsche, didn’t it? the car that all men were supposed to buy or lust after when they reached middleage and realised life was slipping by and still no sign of the career as a Rock God, or whatever. Well, I’m telling you, the Porsche is SOO yesterday. The new car of choice for the middle-class, middle-age menopausal bloke is a Land Rover.

I say this with confidence because middleagedad has JUST has bought himself one. And he is 55. No, we don’t have a farm or need to move livestock around. Neither has he taken up tree-surgery or any other job that might justify a big, diesel guzzling giant with a roof rack strong enough to strap cows onto. His tenuous link to logic is that now he is an artist (student) he needs to move big canvases around (too and from college, no one’s actually bought anything yet) and as he works mostly in ‘found’ materials, it will be useful for lugging junk home (joy…more clutter).

The car hardly squeezes into a London sized parking space outside the house, dwarfing everything around it like an embarrassed elephant and the tragic thing is EVERY middleaged bloke that walks by looks longingly at it. Blokes out with their kids slow down, jaws sagging slightly, and I swear a few of them have ‘hand twitch’, where if they had been braver, they would have stroked it.

When Middleagedad takes it down the dump (which he loves to do) men shuffle over to him and tell him stories of either how they’ve always wanted one, or that they used to have one and intend to get one again in the future. Other middleagedads have approached him at petrol stations and exchanged encouraging words, while looking longingly at it. For goodness sake, what is it about a car where you can see the rivets under the paintwork?

We asked our friend the motoring journalist Craig Thomas to shed some light -“A black Land Rover Defender is the ultimate masculine car” said Craig, who points out that the The SAS drive them. “As men of a certain age strive to find some way of living up to our dads – who built things, fixed things and spent their lives providing for their families by doing real jobs (WTF is a hedge fund, anyway?) – they look for ways to assert their outward masculinity. The Defender does this for men who feel guilty about moisturising” he explains.

“Sports cars? Great fun, but so arriviste. Real men leave them to Russians, spoilt youngsters from the Emirates, and cast members of Made In Chelsea. Who wants to be mistaken for them? Or a bloke with penis size issues? Nah, what you want is something rugged, something masculine, something that’s still built in a factory in Britain. OK, it’s not exactly quick, its driving dynamics are a little, er, basic, and its emissions are bad enough for it to be ineligible for sale in the US (and that’s saying something). But when Cameron’s Britain all goes to shit, the climate deteriorates to the extent that we’re living in a permanent state of winter (which would be like it is now) and we’re all living in a dystopian society like all those TV dramas, seeing off trespassers with that assault rifle we looted from the TA barracks, who’ll be laughing then, eh?

And I’ve driven one off-road. Properly off-road. It’s brilliant (although the Discovery does all the same things a Defender can do, but the interior’s more comfortable). There are very few things that make a modern man feel more masculine than wading through waist-high water and driving on a heavily rutted track through a thickly wooded forest in a Land Rover. Nope, I’m happy to continue moisturising, but I still really, really want a Land Rover. Even if I do live in London. I want to be able to look my ex-factory working, ex-building industry dad in the eye and feel that I’m his equal.”

So there you have it, blame the SAS and a need for a touch of outward masculinity. Whatever, I’m not going anywhere near it, give me a park-able, retro styled fiat 500 any day. Or a Porsche like Saga’s, obvs.

What is it with Hobbs at the moment? Every time I pop into one of its London stores I find something else I…