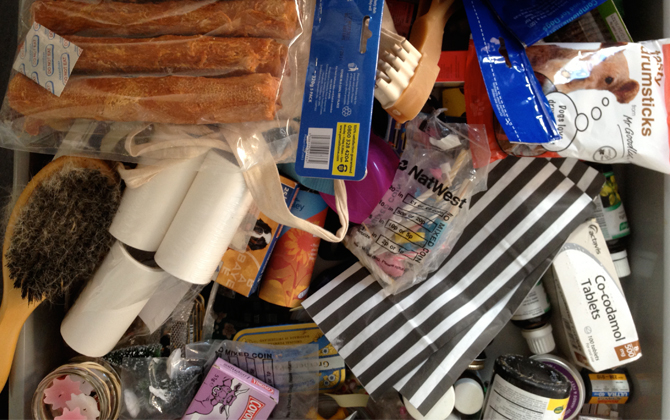 When Amanda asked me to send her a picture of my pencil case for her post last week, I have to admit I was a bit thrown. What pencil case, was my initial reaction. She said it so matter of factly, like there was no question I wouldn’t have one, that I tried to remember if I had ever owned one?

At school I remember having good intentions and starting a new term with a smart new pencil case filled with a complete set of equipment from WH Smith (there was nothing like the joy of that end of holiday trip to buy stationery), but it soon seemed to de-generate into a horrible unruly mess.

There was the pink fluffy one with gonks eyes (it was the 70’s) which ended up filled with broken pencils, Biro’s, a protractor (what was that for?), a compass which was used mainly for carving boys names into wooden desks, a drawn on broken rubber and screwed up bits paper containing doodles of shoes I coveted and my signature when I changed my name to Mrs (insert name of boy I fancied). Feminism hadn’t quite kicked in yet!

Then there was the huge art equipment box I carried to foundation course every day. It had lots of compartments which started off full of charcoal, oil pastels, various shades of gouache and paint brushes, but soon deterioated into somewhere to store my roll ups, tickets to gigs, bits of yarn and an odd second hand earring.

As a fashion student there was the customised case to carry my Magic Markers, which started off as a small red children’s suitcase.  I stuck various pictures of Siouxsie Sioux and Polystyrene on it and covered it in varnish and it became quite the talking point on the streets of Leicester – as did many of my “creations” but that’s another story.

When I started working, there was an attempt to be grown up and professional and being the 80’s this involved a lots of (fake) black leather and Chanel or Moschino pouches, accompanied by giant Filofaxes. Everything was giant in the 80’s, shoulder pads, salaries, even pencil cases! Again this didn’t last long as the 80’s became the 90’s and we all started floating around head to toe in white (Ala Rifat Ozbeck) with crystals round our neck, wearing silver trainers and bum bags. The bum bag might have contained a pen and a tiny notebook for jotting down design ideas, but I don’t remember an actual pencil case.

Since then pens have rattled round in the bottom of my bag and leaked all over everything, but there’s never been another pencil case.

Don’t get me wrong I love stationery – there’s nothing better that a new set of pencils, or rolls of spotty sticky tape – and no trip abroad is complete without a trip to a hardware and stationery shop. But I’m simply not very good at looking after things in a neat and organised way. I’d like to be the kind of person that has the same set of coloured pencils for 25 years (I’m looking at you MAD) and keeps a collection of Hello Kitty rubbers in their own special box, but somehow it just doesn’t happen.

Do the people who own pencil cases also take pictures of their shoes and stick them on the front of the shoe boxes, do they have boxes clearly marked Summer and Winter clothes (containing moth repellent), are they able to find their Halloween/Christmas decorations without  an argument up a ladder with their partner, do they know where the cake board/Birthday cake candles are kept and don’t have to buy new ones every few months, and do they have first aid kits/tiny fire extinguishers located under the sink, ready for emergencies? I think they probably do, because they are proper grown ups with organised lives and neat compartments for things.

“A place for everything and everything in it’s place”, was my mum’s mantra as I was growing up, which makes perfect sense, but for me, never quite happens.

On the surface I’m a together, organised person. I’m rarely late, very reliable and my house looks reasonably neat and tidy to the untrained eye. But open a drawer or delve into the depths of any cupboard and chaos reigns. The pan cupboard is a cascading avalanche of stainless steel, ready to attack anyone who dares open the door, the sewing box a tangled mass of thread, bent needles and sewing machine parts from 1972 and my hosiery drawer frustrates me every day, with its odd combinations of socks and holey tights.

Why don’t I just sort it all out, I hear you organised (pencil case owning) sorts ask?

Honestly I try, I really do, I start off with good intentions meaning to spend to the whole day sorting stuff out, but once I delve into the photograph drawer, dressing up box, collection of old magazines/brithday cards from when I was 6, I end up getting distracted and start some sort of new project/collection/mess and all plans of a neat organised life are abandoned.

So in an attempt to bring some order to my life I am going to take inspiration from the pencil cases and start with my stationery. I too can have a stationery hamper as neat as Francescas – and own an electric pencil sharpener!

Middleagedmum.com: pencil cases and other things of neatness

Since we moved to NYC our dog goes to doggy day care. For $40 a day, she is picked up at 8.30 a.m and dropped back around 4pm. Seems ludicrous to anyone living outside this city but after a month…