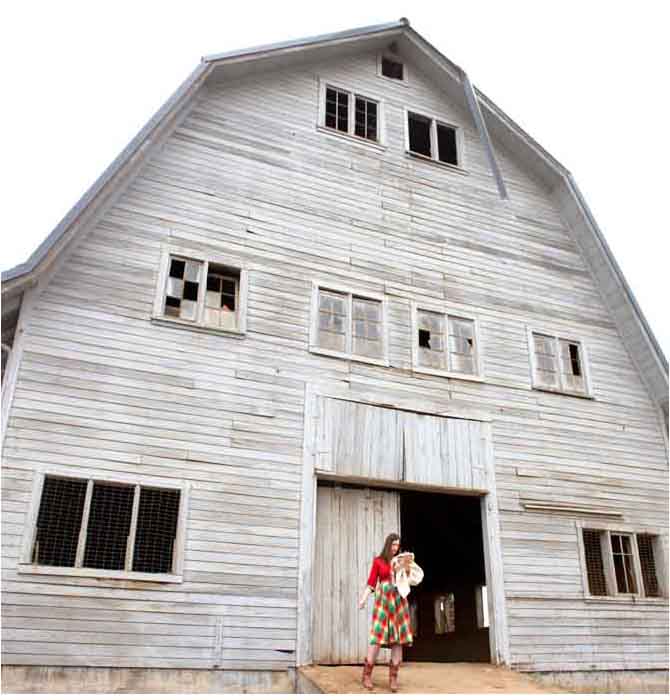 Rachel Ries, in front of a very big barn…

For the next month we have my friend the American songwriter Rachel Ries staying with us, on and off, as she tours the UK with her Spring in the Isles tour. I absolutely love her gentle, thoughtful songs and I’m in awe of her ability to both write and perform them. How the heck do you write a song? And how does knitting help? Before she headed North for the first leg of her tour, she shared the following….

So Rachel, what does a songwriter do all day? How do you actually go about writing a song?

Chances are a songwriter spends most of her day dithering around the house, talking to herself, doing errands and the dishes and fretting over her inbox (all the while trying not to watch episodes of Parks & Recreation). Likely for every 5 minutes she spends on writing a song, she spends another 8 hours in front of the computer, hashing out the next tour, arranging rehearsal times for the band or trying to sell an old amp on eBay. Not too romantic, is it?

As for those songs – since they do happen from time to time – it seems they either work their way out when I’ve set aside dedicated time to catch them or they just bubble up to the surface as I’m going about my daily dithering. I find that last method holds the most promise as there’s a gravity to setting aside time which can snuff that creative spark. Songs seem to come from nowhere. An idea will suddenly surface – a chorus or first verse fully in tact – and then the real work begins of teasing out the strands and working from all directions until you’re holding a full song in your hands. It’s rather like spinning yarn – a focused and gentle hand, but if you tug too much or too fast it’ll break.

I do have some terribly disciplined friends who wake up, make a pot of coffee and spend the next few hours working on their craft. I dream to be one of these diligent few some day!

It sounds much more exciting as a career choice than banking or law, but perhaps not that dissimilar to being a designer? What are the best bits?

It’s funny to build a profession on such a slippery, creative uncertainty. But, yes, perhaps there’s not much difference between all of us? I imagine computer time logged is sadly similar.

I have to say, the best bits all surround the sharing and connecting. I write these songs – which are precious and dear to me – and it never ceases to astound me how they go out into the world and seem to forge their own relationships with strangers. Often what comes out of my mind and heart; some truth I needed to sort out in song; becomes a truth and balm for someone I’ll never meet. That is an extraordinary feeling. Time to time, I’m lucky enough to go out into the world and meet some of these strangers. Touring – the adventure of it, the relentlessness of it, the affirmation of it – feels like the culmination, the fruition of it all.

Is it an age-proof profession? Do you see yourself writing songs and performing until the end of your days?

Yes, I think it can be an age-proof profession if you’re willing to be creative and diversify. I don’t imagine I’ll be 62 and still touring but I could see myself still writing – for others or for side projects I could never conceive of now. With the world of film/television/web there are certainly options for one inclined to making music but less inclined to getting on stage every night.

I know you are a keen knitter, does this help the creative vibe? Or what….

Ah the domestic arts… Knitting, cooking, sewing, growing – all of these are necessary for my stability. I do have to keep myself in check as it’s infinitely simpler and emotionally cleaner to knit a baby’s cardigan than try and further one’s career. However, without making tactile beautiful things with my hands, I’d be an over-stressed and miserable human. And no good songs can come of that, now can they?

The greatest thing is when I can find a way to merge the two and have them serve each other. The last EP I released was a limited edition of 405 and I sewed and hand-numbered each fabric sleeve. Many, many hours at the kitchen table. I also make preserves and sell as merchandise at shows. Whip up some jars of Pear Ginger Jam, toss my website on the label and call it a day in the kitchen well done.

I know you’re also just in the middle of producing your new album, when will it be available here? Also what’s it about?

The new record, Ghost of a Gardener, should be available this calendar year. The process of making an album and getting it out into the world can be fraught with delays but that is my hope.

The themes of the record are family & home, the passage of time and a determinedness not to regret, and how I now find myself spiritually trapped in an urban, driven existence. I was raised in a rural and removed way and much of my spirit is still back there, in South Dakota, with dirt under my nails. I feel this ghost of me – this ghost of a gardener – lost and wandering about my apartment in Brooklyn, confused and wishing to get back out to where it’s green. She’ll get out eventually. For now, we’ve got an album to make and shows to play.

Rachel Ries’s website has all the details of her tour dates, try and get to see her if you can, I’m going to see her at the Green Note so say come hello if you go too. You can listen to her music here and buy her music here

We are on holiday this week, but while we are away…..Exciting news! We are proud to announce we are having our first TWR fragrance…