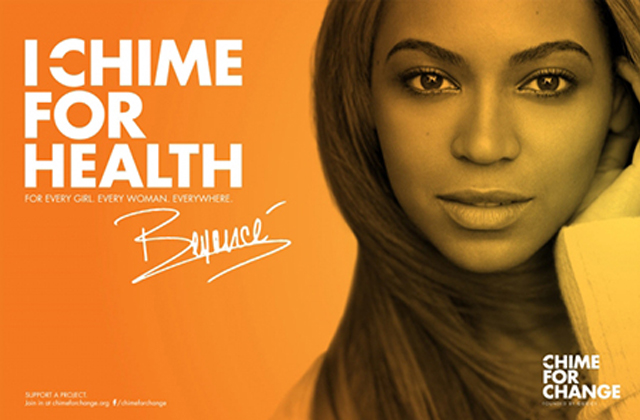 Occasionally in life you feel you are in exactly the right place at the right time. Be it fate, or luck, or simply good planning, things come together at one time and everything just feels right. It may not last long, but if you are in tune with yourself and the universe you might be lucky enough know a few moment of true happiness.

Music has the unique ability to do this and brings people together in way that is difficult to describe if you have never experienced the collective emotion of a musical moment when everyone is listening to and feeling the same thing at the same time. It can happen in a village hall in Burnley pogo-ing to the most extreme anarchic punk band (Crass – I was 17!), or at Wembley watching Freddie Mercury at Live Aid, with 70,000 people. Music unites us and calls to action, like virtually nothing else.

Last Saturday teen daughter and I went along to the Chime for Change concert at Twickenham. The fact that the event was about raising money to help improve education, health and justice for women around the world, may have come as something of a surprise to some of the audience who came to see Beyonce, but the huge posters saying “Education, health, justice. For every woman. Every girl. Everywhere,” soon had the crowd realising this was like Live Aid, but for women.

Chime for Change, founded by Gucci’s designer Frida Giannini, and her friends Beyonce and Salma Hayek, was attended by more than 50,000 people and raised over $4m (£2.6m), which will fund around 200 projects in 70 countries and help to raise awareness around issues affecting women  such as such as genital mutilation, domestic violence, maternal death and female illiteracy.

The star studded line up was impressive Jessie J, Rita Ora, Haim, Ellie Goulding, Jennifer Lopez, John Legend and Florence Welch and the amazing new cool girl band Haim, as well as of course Beyonce. The crowd was mostly women and made up of mothers and daughters, best friends and sisters. Chime for Change was for women and about women and it was probably the politest and most pleasant crowd I have ever encountered. Even the hideously packed train journey home from Richmond (hello TFL, how about a few extra trains when you know you have a large crowd using trains?) was spent chatting with other groups of women about how amazing the night had been.

Performances were interjected with inspirational and thought provoking speeches from Halle Berry, Jada Pinkett Smith, Julia Roberts, Gwyneth Paltrow, Cameron Diaz and of course Madonna, who spoke about her Ray of Light Foundation which supports girls’ education in Pakistan and Afghanistan.

J Lo turned out to be our girl crush of the evening and ended with her set with an amazing performance of Come Together with her “Bronx homie” Mary J Blige. Headliner Beyonce performed all her empowering songs along with her all female band and the crowd went wild when Jay Z made a surprise appearance for Crazy in Love. The overwhelming feeling as she ended the show with Halo, was one of female empowerment and the dawning of a new era for women.

I have been banging on about the lack of role models for young women since my daughter became a teenager. Over the last couple of years this has been changing, as a new breed of young feminists have used the internet to spread their message. Women like Caitlin Moran, The Twitter Youth Feminist Army and Laura Bates who set up everydaysexism.com, are changing young women’s perception of feminisim and making it ok to speak out. The Daily Mail’s coverage of the event (why do we read it??) focused on the fact that some women had taken to Twitter to complain about the skimpy outfits worn by some of the performers. Oh please, do we really care and isn’t it ok to be a feminist and look fabulous?. This new breed of feminists are not going to stop shaving their legs and start wearing dungarees and quite frankly I’m glad. If Beyonce is the acceptable face of modern female empowerment and makes my daughter proud to be a feminist, so be it.

After all, in her words ” Who Runs the World? Girls.”

We don’t often feature men in our style icon posts, not because older men don’t inspire us – there simply don’t seem to be so…