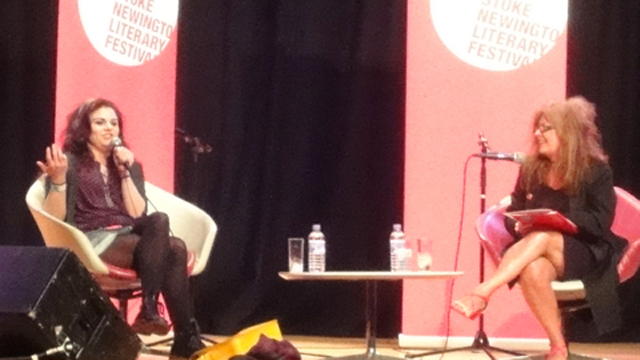 Last weekend was a frenzy of all things literary here in the peoples Republic of Stoke Newington. The Literary Festival kicked off with Irvine Welsh in conversation with on John Niven Monday night, who drank and swore their way through a thoroughly entertaining talk, where we learnt Irving Welsh thinks writing a book is “a bit like having a shit, first, you are constipated, then you get it out and think, thank God for that, and so it is gone. You flush it away.”

According to my inside sources the pair carried on their evening late into the night, as Welsh re-visited some of his old haunts (he used to live in Stoke Newington). Which resulted in him being refused onto his return flight to LA the next day, as he was still drunk. You can take the boy out of Edinburgh etc etc!

I also saw Paul Morley talk about his new book The North, which without sounding completely sexist, might be good one to buy any Northern dads for Fathers day. Morley, who is from Stockport offers a personal, yet alternative take on being from the North and tries to avoid the typical grumpy git bloke stereotypes. He looks at the rich history and important cultural heritage, as well as exploring the reasons some Northerners are so desperate to get away.

The highlight of the weekend was of course the conversation between Suzanne Moore (another Stokey resident) and Caitlin Moran. The event was the first in a series of Mary Wollstonecraft lectures  in honour of the 18th century feminist writer who lived and worked in the area.

Armed with gin and tonics the pair had the audience entranced from the start, with Suzann Moore starting by asking why Caitlin wasn’t very angry in her book , How to Be a Woman. “Was that a strategy?” she asked. “Very much” Moran said, “I don’t want to argue with anyone at all. I just want to convince people, I want people to hear me, and I want to change their minds’.

They covered many topics and Caitlin’s views on being a feminist made perfect sense and it’s obvious to see why she is inspiring a new generation of women.

“when you open a woman’s magazine, it tells us; ‘Hello, really disgusting person! I got 374 suggestions on how you can use money, time and pain to become marginally better! Mens magazines, on the other hand, are like ‘TITS YAY’. It’s such a shame that the people with the tits are not the ones shouting, TITS YAY”.

“It means being equal to men. That’s all that feminism means. And if you believe in that, then you are a feminist.”

“Don’t ignore things like MTV, discuss it with your daughter and point out how ridiculous it is, When your ten year old watches a music video and says, ‘that’s an unlikely scenario’, you know you’ve done your job”.

My favourite story of the night was her fantasy scenario with her wannbe new best friend Michelle Obama. “there’s me and Michelle in the oval office at 4 am, doing tequila shots and Barack walks in. We slur, don’t worry we’ve sorted out Palestine. But don’t look on Twitter.”

I would also love to read read Suzanne Moore’s imaginary new book, How to do the Menopause: Sweaty & Mental!!
We hear you Suzanne, we hear you……..

It’s been a remarkable sale for retailers apparently. Due to it not actually being cold enough to need knits and coats, we all held…